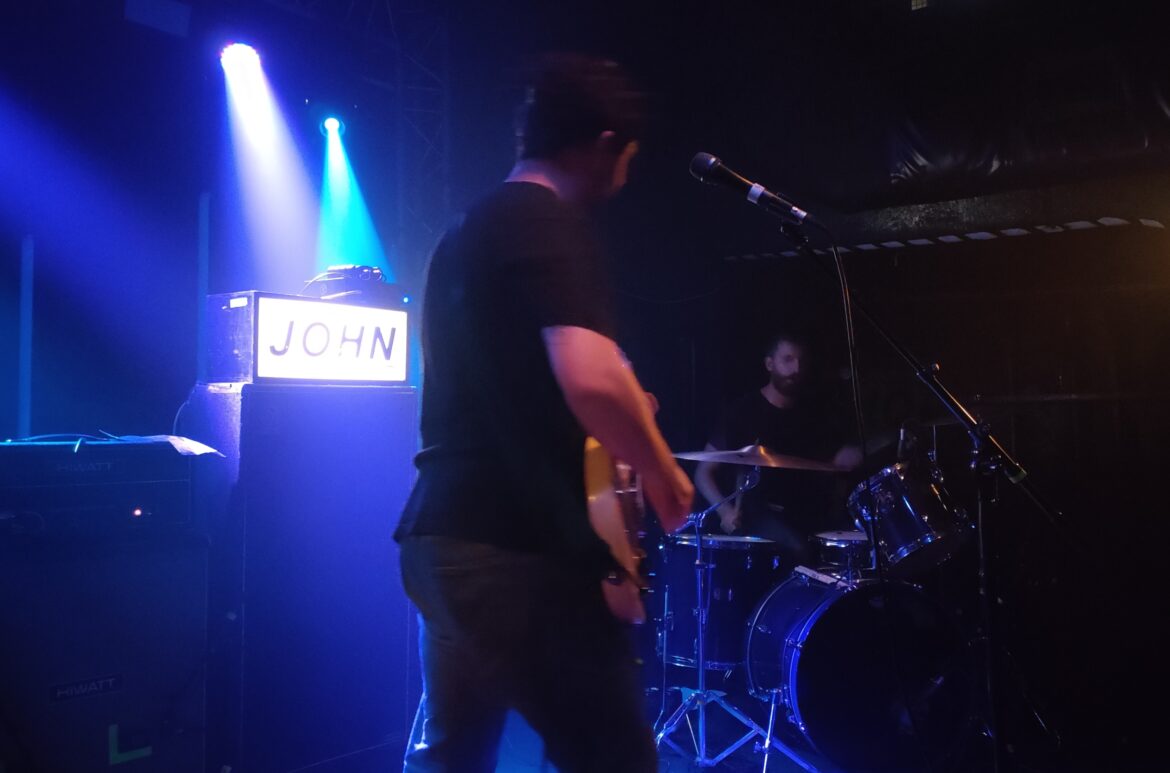 As stage introductions go, it’s not quite “LET’S GET READY TO RUUUUUMBLE!!!.”  But then, JOHN are not PJ and Duncan, and thank heaven for that.

Playing a raw, earthy brand of punk rock, nobody could ever accuse JOHN of being flashy.  They are just two down-to-earth guys, who just happen to have some of the best riffage in the business.

Whilst you won’t ever find them on the front pages of the tabloids, then, or fronting Santander adverts, they have successfully gathered a healthy following over the years.  Their recently-released third album, ‘Nocturnal Manoeuvres’, did even look like it might sneak into the UK Top 40 at one point, which would have been astonishing for a band that could never be described as ‘commercial’.  In the end, it fell just a little outside, but the band were clearly emboldened by the support nonetheless.

Bristol, of course, is a city that knows a good riff when it hears it, and JOHN have always done well here.  The tour in support of previous album, ‘Out Here on the Fringes’, saw them sell out the nearby Louisiana; tonight’s show at the larger Thekla attracts an impressive Sunday night crowd.

JOHN have always been a very good live band, but it quickly becomes apparent that the post-lockdown version is looking to step it up significantly.  All the traditional ingredients are there – John Newton’s ferocious drumming and raw, gravelly vocals, Johnny Healey’s insanely tight guitar work – but now, there is a heightened confidence about the pair.

Now, it feels like they realise just how freaking good they are.

Opening with firebrand singles ‘Sibensko Powerhouse’ and ‘A Song for Those Who Speed in Built-Up Areas’, the band quickly work through some old favourites in ‘Squad Vowels’, ‘Western Wilds’ and ‘High Digger‘ in a breathless opening salvo.  These songs, great though they are, are not the story of the night.

Often, a band’s new material can receive a muted response when compared to its established ‘hits’, but tonight it is quite the opposite.  A crowd that is already lively during the opening songs, reaches absolute fever pitch as the ‘Nocturnal Manouevres’ material is unleashed.

You can take your pick on highlights.  ‘Austere Isle’ is smooth and sumptuous, ‘Stadium of No’ gets the whole audience bouncing with it’s angular boppiness, ‘Non-Essential Hymn’ is an epic six-minute odyssey.  The utter brilliance of their latest release is laid bare in the best possible way.

The band seem to revel in the crowd’s response.  In fact, their only misstep of the night is when Newton rashly contemplates (tongue firmly in cheek) which of the city’s two football grounds the band might perform at on their next tour.  Keen to avoid showing bias to either the red side or the blue side, he wisely beats a hasty retreat.

In any case, it’s impossible to dislike the Johns.  Just two cracking nice guys making stadium-sized music in your family’s front room, and loving ever minute.  They close out with probably the best song of the night, ‘Northwood Turret’, and the satisfied crowd drifts away. He’s John, he’s John, and they’re JOHN, and they just keep getting better.