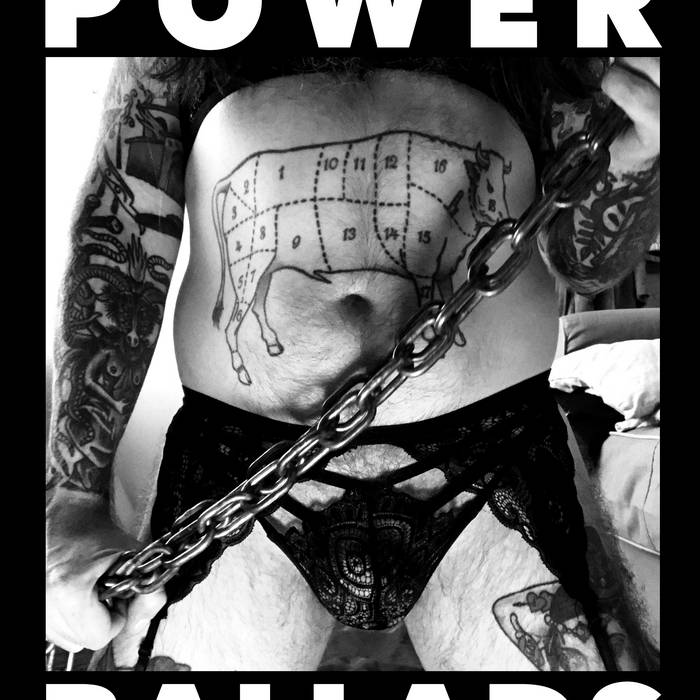 I think its safe to say that BLACKCLOUDSUMMONER is on a bit of a creative roll. From those early releases in 2017\2018, BCS found his feet. Listening back to BAKED ARCANA VOL 1 or PORTALS, now you can start to see where the project would be headed. Prolonged, brutalist and abrasive soundscapes. Then in March BLACKCLOUDSUMMONER formed the group Wet Mirror with ITCHING. This release was more meditative. Kind of. It was the most serene release BLACKCLOUDSUMMONER has put his name to at the time. Then came the career defining TOTAL FUCKING GODHEAD album. Here it felt like BLACKCLOUDSUMMONER was actually saying something important, rather than creative music from the void. And he did have something to say.

On TOTAL FUCKING GODHEAD, BLACKCLOUDSUMMONER was talking about finally being comfortable in his own skin, and headspace, having recently come to terms with his sexuality.

This now leads us to his latest album POWER BALLADS. The title works on multiple levels. Firstly as a play on words around Power Electronics and the 80s genre of rock power ballads. I’d like to clarify right from the bat that BLACKCLOUDSUMMONER isn’t actually singing on any of the tracks, and if he is, it must have been buried under layers of cataclysmic noise and audio detritus. On the surface POWER BALLADS might be the harshest thing BLACKCLOUDSUMMONER has ever released. From the opening squeals of feedback, junk noise and claustrophobia of ‘CHEAP HEAT’ you know its just on. TOTAL FUCKING GODHEAD was quiet and tender in places. It didn’t want to slap you about. It was tired of that. It wanted to talk and get to know you. It feels like BLACKCLOUDSUMMONER has been messed about and hurt for lowering his armour and is back to what he knows best. Dirty, abrasive noise. ‘DESTROYING OLD ALTARS’ seems to exemplify this. Opening with feedback, harsh static, garbled vocals and some basslines buried deep BLACKCLOUDSUMMONER is effectively redefining what it is he does. ‘ANGEL BLOOD’ is slightly more reserved in its composition, but it is no less lairy at the world. ‘HANDSOME DEVIL’ feels like it’s one part narcissism, part bitter vengeance. What is it is totally enjoyable. Hearing the tones he wretches out of his equipment is a joy to behold and keeps repeat listens fresh and as exhilarating as the first time.

The elephant in the room, of course, is the cover. Usually, BLACKCLOUDSUMMONER covers consist of some lurid artwork he has created. On ‘BLOOD MUSIC’ and ‘UGLY INSIDE’ you know what to expect before you hear them. ‘BLOOD MUSIC’ with its deep red swirling shapes and defined brushstrokes and ‘UGLY INSIDE’ with its broad use of black, with the off bit of white daring to push its head out of the gloom. Here, however, things are slightly different. The cover is of BLACKCLOUDSUMMONER’S groin and stomach. We can see his many tattoos. He is also holding a length of chain and all he is wearing is something that Ann Summers would be happy to sell you. It is slightly romantic, slightly playful but with a hint of danger. Is that chain for some fun horseplay or full-on flogging? Maybe its neither. Maybe its both. BLACKCLOUDSUMMONER isn’t really letting on. And this is what makes POWER BALLADS such a delight. Listening to POWER BALLADS reminds you how far BLACKCLOUDSUMMONER has come, while giving clues to where he’s headed. He has a unique voice and tries to tell a story with each song, rather than just resorting to walls of feedback for the sake of it. When all the dust has settled on POWER BALLADS, BLACKCLOUDSUMMONER could be one of the most important musicians working today.