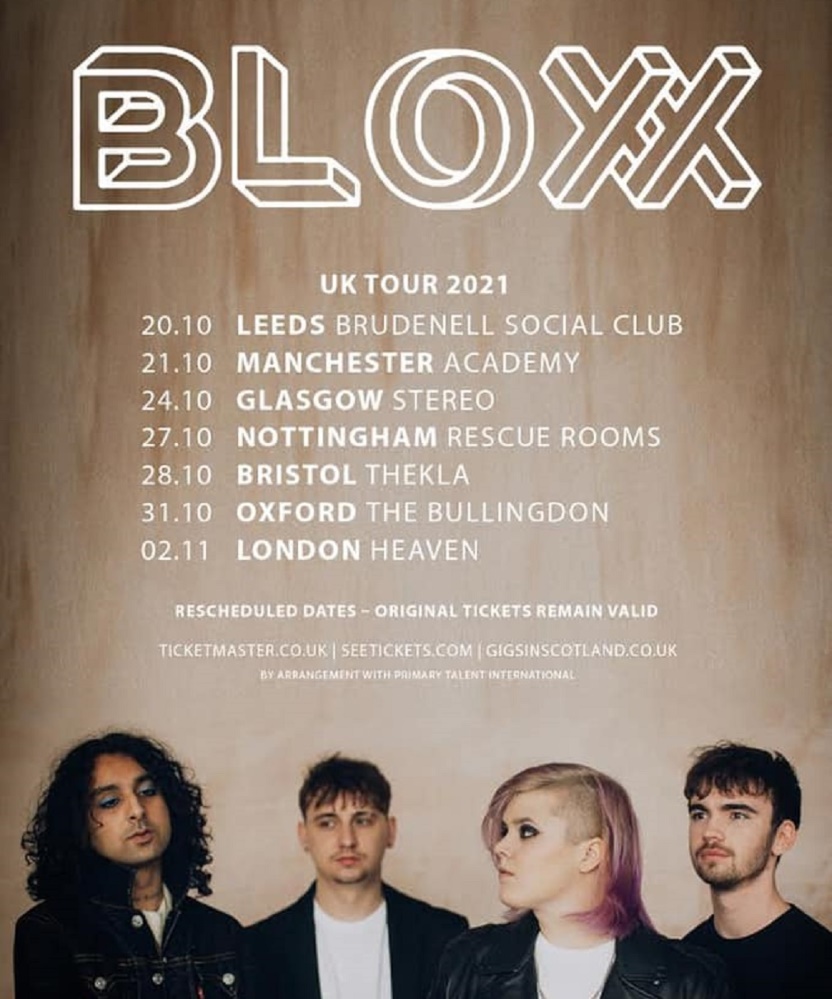 After a dearth of live shows (for obvious reasons) over the last 18 months, the traditionally hectic tour schedule of October now also has to accommodate a lot of cancelled dates from last year all of which is adding up to a feast of live music around the country as the gig-going public tentatively return to action. Tonight, Manchester Academy hosts three different events in its three rooms, this one being kicked off by Emma McGrath who is easily winning the crowd over with her highly accessible material, which is somewhere in the ballpark of Marika Hackman with maybe a little Laura Marling thrown in. McGrath then produces her trump card, introducing her partner and frontwoman of tonight’s headliners Bloxx, Ophelia Booth, to accompany her on the closing track of her set.

Next up are The Rills, a Lincolnshire three-piece who deal in bright, tuneful indie pop and have elements of We Are Scientists and maybe even The Libertines. They kick off with last year’s excellent ‘Stardog’ single and road test some new material before their own tour later in the year.

After quite a number of singles Bloxx put their debut album out in August 2020, which must have been a strange experience for them, launching their long-awaited record and having to wait in the starting, erm, bloxx for a year or so before being able to mark its arrival in time-honoured style with a tour. Tonight they very much still treat this event as a tour for the album, heading straight into the record’s blistering title track ’Lie Out Loud’ and instantly creating a celebratory atmosphere that will remain for the whole show. Every track is greeted like an old friend, ‘Sea Blue’ from 2019’s Headspace E.P. is next and treated to clapping hands and flailing limbs.

It immediately becomes obvious that this crowd knows every song, whether it’s one of the singles or, as with ‘Sea Blue’, the third track on an E.P.; Ophelia Brown must be gratified to hear every word sung back to her. She is an engaging and energetic presence and it’s easy to imagine her performing these songs in much larger venues. The band has a really nice balance, with Taz Sidhu a natural guitar hero and the rhythm section of Paul Rau (bass) and Joe Kinton (drums) a very solid unit.

Fan favourite, 2017 single ‘Coke’ goes down a storm after Brown announces to the audience that the band only played it live yesterday for the first time in over a year. ‘5000 Miles’ is another winner, ten times better than The Proclaimers and two and a half times better than The Pretenders. ‘Pop Culture Radio E.P.’ is the band’s most recent release, and the title track is probably the most commercial song in their canon; of course it is received enthusiastically too. ‘Magnet’ came out as a (digital) single in its own right before appearing on the aforementioned E.P. – it’s sounding mighty with its ace rumbling bass intro and yet another ocean sized chorus. Every song sounds like a single and the set already sounds like a greatest hits show.

Emma McGrath returns the favour from earlier in the night and appears to provide a sumptuous acoustic guitar backing for Brown to sing ‘What You Needed’ to while the rest of the band have a breather. The song provides a nice contrast to the power pop sounds of the rest of the show, and Brown’s fears that her voice is failing ultimately prove unfounded, though she does forget a few words and provides a charming ad-lib partway through the song.

By the time the band finish with ‘Everything I’ve Ever Learned’, everyone here will be convinced that they have seen a band who surely must go on to further greatness; the quality of the songs in the Bloxx catalogue is already staggering.