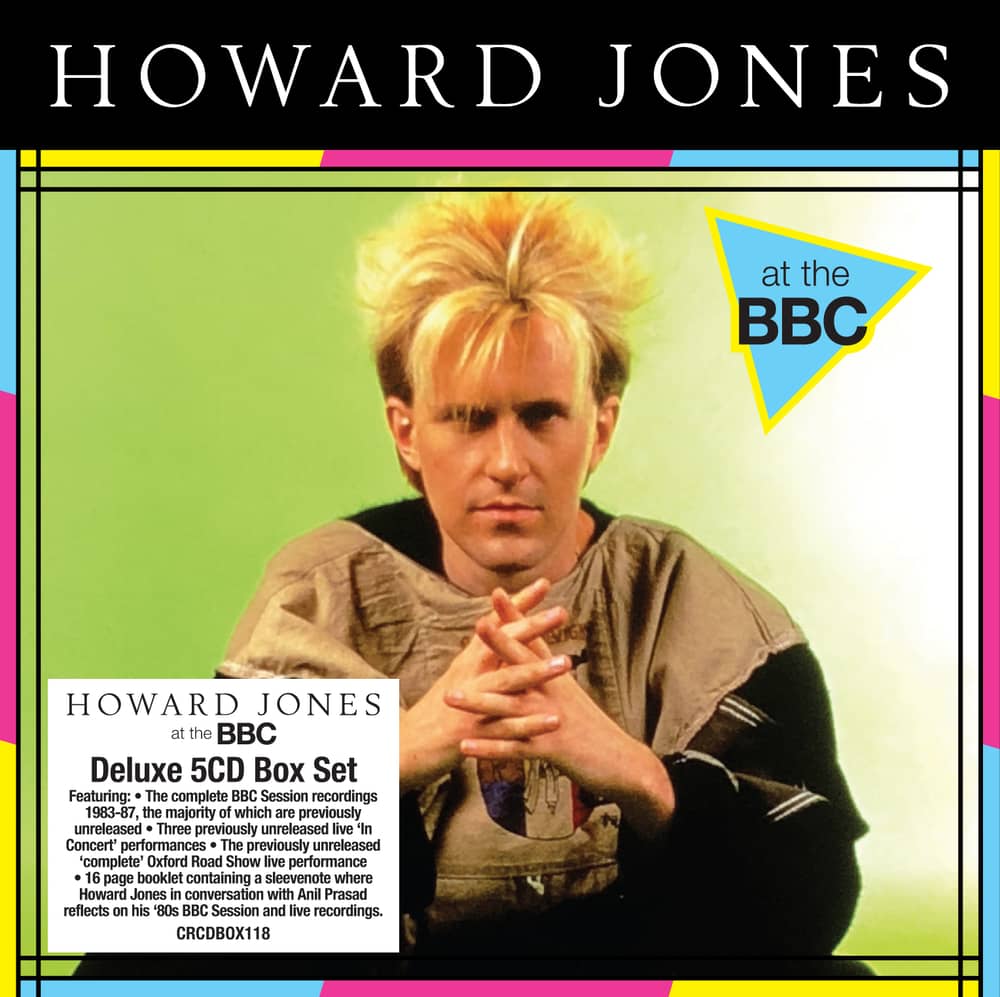 In January of 1983, with Howard Jones‘s career just starting out, this young artist hired the famous Marquee Club in West London. He invited the great and the good from record labels & media to witness his brand of electronic music. All performed with friend and mime artist Jed Hoile conducting improvised choreography in front of Howard’s bank of electronics. This paid off, as of the 13th of March 1983 he was being heard on Radio One’s Kid Jensen show, as ‘New Song’ hit the airwaves and we were being urged to “…throw off your mental chains”.

This is where we start on this new collection assembled by Cherry Red, as he progresses through a series of recordings made for the BBC from 1983 to 1987. Five CDs are available in this set, which starts with his early work for both Kid Jensen and Janice Long on Radio 1. As I’ve already mentioned these recordings start with ‘New Song’. Now not so new, but still sounds as fresh as ever, as the lyrics speak to me “…don’t crack up, bend your brain, see both sides, throw off your mental chains”, his philosophy of mental health was before its time, as in the 21st-century wellbeing is the phrase that speaks for all. Jones was really before his time and might be looked upon as a brilliant thinker. It continues with ‘Don’t Put These Curses On Me’, followed by ‘Natural’ and ‘Human’s Lib’, the title track from his debut album, released the following year. The disc continues with another recording of the song, this time recorded 6 weeks later, for the same show. ‘Human’s Lib’ was a number that explored the subject of sloth and sexuality, when the HIV/Aids pandemic was being realised. Howard sings “Sometimes I’d like to go to bed with a hundred women, or men and lose my mind in drugs and drink…”, this was at a time when the work-life balance was changing, he continues “…don’t want to go to work… life seems so meaningless“.

Former Radio 1 DJ Janice Long is featured on this disc, from a show recorded in January ’85, where tracks from his second album Dream Into Action are heard. The DJ also features on the second disc, with recordings from March ’87, songs from One To One, illustrating a relationship with the broadcaster. It was when listening to the first of these, “The Balance Of Love”, that I found it an awakening, as he sings “The price of your love’s too much to pay… you want my love, but you don’t want me… you’re taxing me at your highest rate…. the balance of love is in the red…”, turning what was happening in the economy into lyrics within the song. A further 5 numbers, recorded for the show continue, in which the glorious excesses of 80s synthesiser can be heard, and his take on reggae, with “Give Me Strength”.  This disc culminates with a live recording from The Paris Theatre, which was first broadcast on the 15th October 1983 and recorded just 10 days earlier. It is here that Howard’s What Is Love is first featured.

A further 2 concert recordings feature on discs 3 and 4, with a show from Friars, Aylesbury in April of ’84 (first broadcast on the 12th May) and The Royal Albert Hall on 17th December 1984, a recording first broadcast in April of ’85. The final disc features a previously unheard complete Oxford Road Show performance in 1985, that was simulcast on BBC Radio 1 and BBC2 on the 15th March 1985, a technology in the days before the Red button. In conversation with sleeve note writer Anil Prasad, Howard has said “This set is a really valuable, historical document. You hear me before the first album was released, after I’ve had success, my evolution from a solo performer to a band-focused performer, and all of it happened across only four years from 1983-87…” As a fan and reviewer. I can certainly echo what Howard has said. I found it an immersive experience winding back the years and reliving them in the 5 hours of recordings offered, where I also found out something about the artist that I had otherwise overlooked.