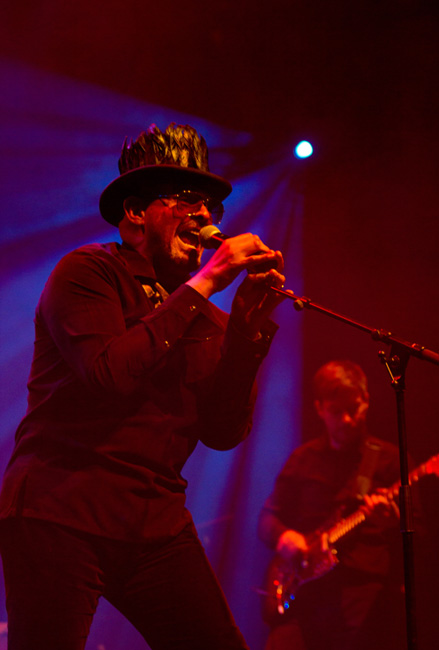 Comedian Simon Day opened for Barry Adamson, reading poems as ‘Yorkshire poet Geoffrey Allerton’. By turns wonderfully comic and subtle, his poems touched on everything from Art house cinema fans to trains as a microcosm of British society. It was certainly an unusual opener and fun to see him doing so different from ‘The Fast Show’.

Barry Adamson came on dressed all in black, with a feathered top hat and shades, backlit astride a stage covered in white shag pile, like Austin Powers turned to the dark side. Louche and loving it, he and his band tear into the first song of his new album ‘Destination’.  Things quickly smooth out though, with ‘I will set you free’ and the Scott Walker-esque ‘If you love her’. Adamson’s capable backing band is joined by the Trinity Strings and later a horn quartet, which leads a more cinematic feel to some of the songs. 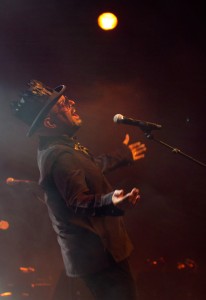 For the dirty funk of ‘Black Holes in my brain’ one of the strongest songs of the night, Adamson pulls out 2 skull maracas from a shopping bag. He informs us that the skulls are named Howard and Dave, presumably after his former Magazine band members, as he slinks his way through the number like a Voodoo Sinatra.

Closing numbers include the chill out anthem, ‘Straight till sunrise’ and ‘Jazz Devil’ which sees Barry rapping about his alter ego bouncing from Heaven to Hell and back again, a character he clearly relishes in playing.

Considering the darkness and bleakness of some of his earlier bands and albums, Barry Adamson was having a ball tonight, outside the snow had just started, inside it was all devil grins and hellfire. 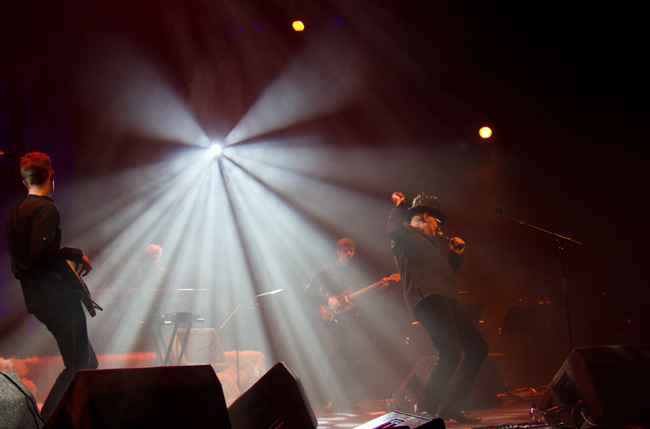 Barry Adamson’s new album ‘I will set you free’ is out now.

setlist:
1. Destination
2. I Will Set You Free
3. Whispering Streets
4. You Sold Your Dreams
5. If You Love Her
6. Turn Around
7. Black Holes In My Brain
8. Looking To Love Somebody
9. The Power Of Suggestion
10. Psycho_Sexual
11. Civilization
12. Straight ‘Til Sunrise
13. Stand In