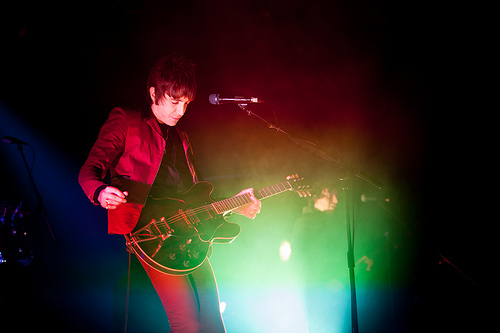 The last time I saw Miles Kane live was at Sheffield Town Hall playing alongside Alex Turner in the Last Shadow Puppets. Usually I don’t listen to these types of artists most of the time they all sound a bit samey, but Miles definitely has something different about him which even I can enjoy listening to his music. This was a perfect time for Kane to showcase songs from his debut solo album ‘Colour of The Trap’.

With the opening song ‘rearrange’ Miles and his band walked onto the stage. The crowd went wild some of the roughest jumping I have seen in a while with beers flying up almost hitting the ceiling.  As he leans backwards playing his electric guitar the riff radiates outwards reaching every corner of the room making you dance round in circles as he sings the lyrics ‘Let it out, let it out, let it all out’.

Not that I needed reminding that I was at Miles Kane gig the backdrop was clearly backlit with his name on.  You’d expect it to be just the young lasses screaming for him but even the lads were getting quite loud.  Kane likes to get the lasses screaming for him though as he says ‘I’d like to dedicate this song to all the beautiful girls here tonight’. As starts to play ‘Happenstance’

Songs such as ‘telepathy’ sounding very similar to The Last Shadow Puppets, even so Kane performs flawlessly throughout the night and I much prefer him as a solo act compared to his previous groups The Rascals and The Little Flames.

Miles shouts out ‘I want to thank you for making it a fucking great fucking night! Fucking great Manchester!  Now do you fucking want it!’ Putting on an exhilarating performance bursting straight into the song ‘Inhaler’. Ending the night with ‘Come Closer’ as the audience screams and shouts to the chorus ‘Whoa Whoa’ ‘Ahha-h-ah-ah-ahh-ah’

Miles will also be playing a very intimate date at Warrington Parr Hall on the 17th August so I would definitely recommend getting a ticket if you missed him at Manchester Academy.