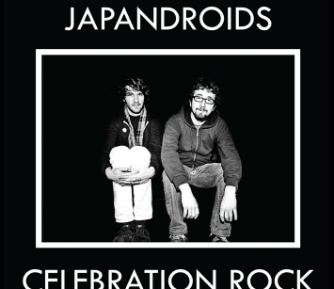 Japandroids‘ breakthrough album, 2009’s Post-Nothing, was supposed to be their epitaph; a final burst of creativity to cap off a spirited but fruitless run on a Vancouver gig circuit that they practically built themselves. It was hardly a downer as an album, but the feeling of finality and disillusionment – not least in that title – was palpable. So no-one was as surprised as they were when it became a word-of-mouth independent hit, earning them enough column inches and blog bandwidth for a follow-up to become not only viable, but a necessity.

As early as the chorus of ecstatic opener ‘Night of Wine and Roses’, it becomes apparent that the target here is not just ‘another Post-Nothing‘ or a final victory lap, but a full evolution and a promotion to the ranks of their peers. The enormity of the sound is overwhelming, even though the team and the tools behind Celebration Rock are basically the same as before. David Prowse’s drums are louder, faster and harder, while retaining clarity and taking on a breathtaking, delirious energy. Though the volume and thickness of Brian King’s guitars have only been moderately tweaked he plays like a man possessed, working power chords, intricate finger work and furious shredding almost into the mix almost simultaneously and with the fluidity of improvisation (even more impressive when you find out that Japandroids generally operate a ‘Fuck overdubs’ policy). From the crackling fireworks that open it through the scream-along lyrics (“We’ll yell like hell to the heavens! / HEY!“) and a blistering breakdown, it’s a song that can provoke a 180 degree about-turn in mood by sheer enthusiasm alone, but, unbelievably, it’s also probably the weakest moment on an album that somehow improves at a steady rate before peaking around track seven of eight.

A lot of Post-Nothing‘s appeal lay in its seamless integration of the band’s knack for a frenetic, interaction-heavy live show into the album’s delivery and production, and this is taken to new heights this time around. Although the guitars do sound like they’re coming from knackered tour amps and the drums are bolstered by the echo of a small-to-mid sized venue, this is actually most evident in the shared vocals. Speaking to Pitchfork recently, King spoke about how they “actually tried to simulate the sound of what we thought the crowd would do during the songs,” and it doesn’t go unnoticed. ‘Evil’s Sway’ reimagines the “Ahh yeah“s and “Alright“s of Tom Petty‘s ‘American Girl’ as a triumphant 5am shoutalong that’s arguably even more thrilling. And then there are the moments when the vocals push past ’til-your-lungs-burst and into that-scene-in-Scanners territory; ‘Adrenaline Nightshift’ features a delivery of “drunk” so emphatic you can practically hear the tendons in King’s neck tearing.

None of which would mean a damn thing if the songs themselves weren’t so magnificently written. By this I’m referring not just to the tunes – though you’ll be hard pushed to find a stronger collection of ear-worm choruses and riffs this year – but also to the quality of the song craft, things like structure and pace. Every second feels like it belongs and has a purpose. The long intros are there to build anticipation but also to establish pace. It’s nice to see the bridges – too often used as a dumping ground for weaker almost-choruses and padding – actually doing their job, by which I mean building up to and bolstering the choruses. The ones in ‘Younger Us’ feel like a jump into lightspeed, Prowse’s double-time drum pounds creating the visceral sensation of acceleration before a split-second sucker-punch of a pause heralds the collosal chorus.

This mastery of the dramatic pause is unusual for a band who’s chief prerogatives are currently intensity and pace but it comes up again and again, most notably when combined with a way-beyond-the-red vocal to gift the album’s most important lyrical moments the reverence they deserve. “Drunk at the back of the bar” and its sister line “Death’s got no love / and youth no respect for me” wouldn’t be half as effective if they weren’t placed so entirely front-and-centre by the guitars dropping out completely. Album highlight ‘The House that Heaven Built’ is even smarter, with the overall mix gradually building in density and volume in a way that’s almost inaudible, not because it’s slight but because it’s the sound of a song getting more involved with you as you become more involved with it – the result of which is a gut-wrenching moment as all but a single guitar track drops out for one of the album’s centerpiece lyrics; “It’s a lifeless life with no / fixed address to give / But you’re not mine to die for anymore / so I must live.”

But Celebration Rock is bigger than all of this, and while trying to establish why I’m put in mind of the best album of last year, m83‘s Hurry Up, We’re Dreaming. The marriages of lyrical and musical content seen in both achieve a kind of transcendence by facing outward, creative an inclusive listener experience through generosity and optimism. Both have a youthful naivete that could be corny and laughable if it wasn’t so well meaning. But where m83 aimed for the heavens and the heart, here Japandroids are going for the gutter and the guts. Rather than finding optimism in dreams and aspiration, Celebration Rock is an album about what you already have. As ‘Continuous Thunder’ sees the album out on a mid-tempo, pensive note, they ask “If I had all the answers / and you had the body that you wanted / would we love with a legendary fire?” You could read it both ways, but there’s no doubt as to King’s meaning.

Celebration Rock is for the kid staggering to his feet, wiping away broken glass and teeth for round two. It’s for the frantic, sweaty embraces at the end of a night, a year, a lifetime. Fuck, it’s for star cross’d lovers re-uniting under an incoming jet-plane. It’s for underdogs, stray dogs, any dog who’ll respond to “Don’t we have anything to live for?” with a scream of “Well of course we do!” ferocious enough that there are chunks of throat in it . It’s a record about love and life in the most bombastic terms that isn’t afraid to be melodramatic or fun, and it does it without a single wink or sneer. And God knows we need that right about now.