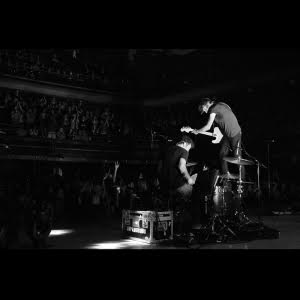 You won’t remember this, but over three years I penned a review of the latest Japandroids offering Near To The Wild Heart of Life, you can read it HERE should you be so inclined. Looking back, I had a couple of nit-picking reservations about the release, not only did it fail to reach the cumulus-busting heights of 2012’s Celebration Rock but it had taken them an age, five years to be precise, to conjure up a mere nine tracks. I sarcastically concluded my review with the proclamation “I can barely wait for the next instalment in 2022”.

So here we find ourselves, 18 months ahead of schedule, but still with no new material. Massey Fucking Hall (Live) is, as the title may suggest, a snapshot of the Vancouver duo letting rip at the semi-legendary Massey Hall in Toronto during their 2017 tour. Therein lies a problem. Massey Hall, draped in history, architectural splendour and most importantly of all, it’s a big all-seated venue. Japandroids, as anyone who has borne witness to their live shows will attest, are loud, uncompromising and liable to strip several layers of paint from your woodwork within the first half a dozen opening bars. In other words, it’s a gamble.

Eight long years may have ticked by since my only experience of their live ferocity and yet my ears are still ringing. In all honesty, I could barely make out a single track, it was an impenetrable wall of guitar wailing submerged beneath an impervious layer of head-crushing percussion and primeval screaming. I loved it. However, feed this through the prism of studio quality production and remove the imperfections and you’re left with Massey Fucking Hall, a limp lettuce leaf of an album which even the diehards are going to struggle to embrace warmly. It’s the musical equivalent of a failed Greatest British Bake Off contestant, all the ingredients are here but somehow you are left with a very soggy bottom.

Take ‘The Nights of Wine and Roses’ for example, it lights up the opening to Celebration Rock with incandescent rage but here it takes on the form of a forlorn week-old balloon left over from a childs party. It wheezes its way to an inadequate denouement before succumbing to gravity. In a similar vein, the rousing ‘The House That Heaven Built’ ought to be bringing down the curtain, the walls and half of Ontario but instead the boys simply sound exhausted and as relived to see the finishing line as I was in the 2013 London Marathon. To be objective, filling a sizeable venue with a sound that works best when it chaotically reverberates off a low ceiling and penned-in walls is never going to be straightforward and yet, on occasions they pull it off.

The eight minute opus ‘Arc Of Bar’ takes on a majestic hue of colours and is transformed from the plodding album track. ‘Fire’s Highway’ continues to crackle like a well-tended fire long after the album is over and ‘Continuous Thunder’ comes through the speakers with aural malevolence which makes me wonder if the protagonist in Ringu is about to crawl out and devour me. However much Japandroids may offer up a great live performance that doesn’t necessarily equate to a great live performance album, strip away the context and the occasion and you’re merely left with two blokes giving their all on a Butlins talent night. Harsh, yeah probably, but you can probably sense my disappointment.

Massey Fucking Hall is really a stocking filler for the afficionados until such time as some genuine new material turns up (my money is still on 2022). If you’re looking for a way into the band then trust me, these are not the Japandroids you are looking for.

Massey Fucking Hall (Live) is out now on ANTI- records