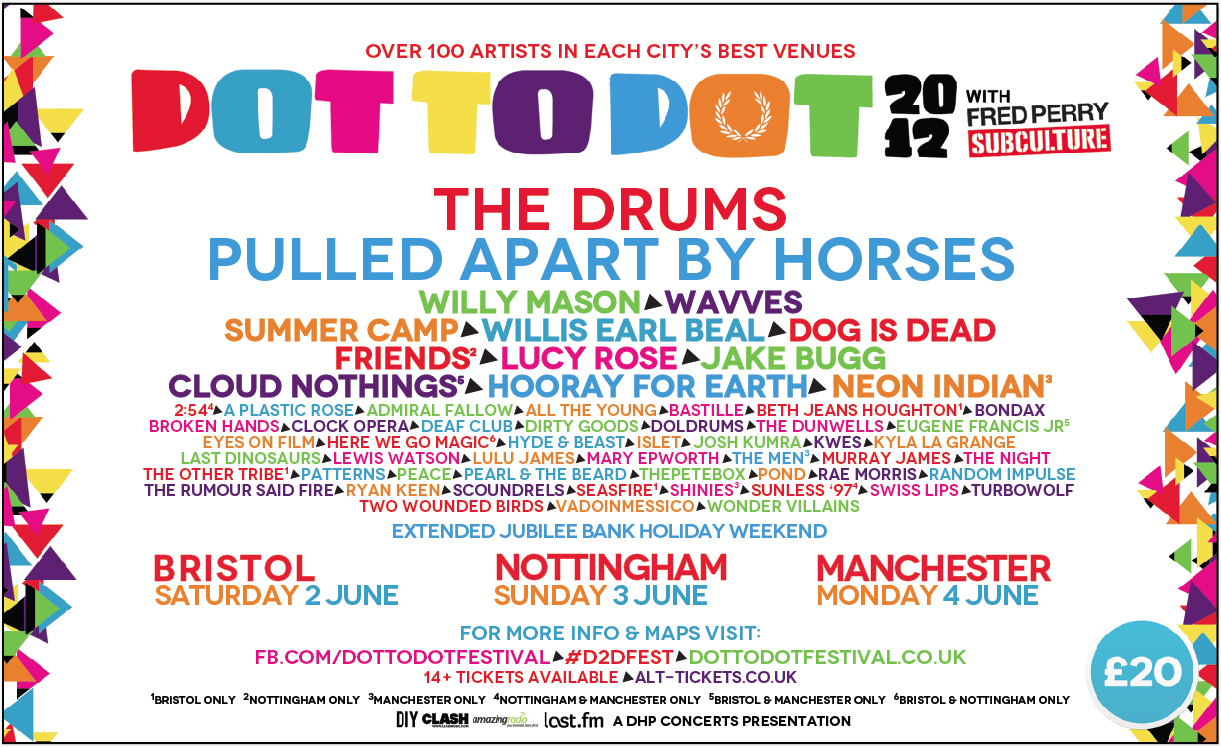 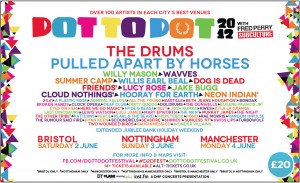 It’s always tough finding a starting point for a one day festival. At the ticket collection you could see the timetables being unfolded and met with looks of dismay at inevitable clashes or even the sudden urgency to tread across the town center to start the day off. It’s made even harder by Dot to Dot, it’s pedigree lineup of eclectic and diverse musicians made the day hard to schedule, but impossible to forget.

Many made the trek to Bristol Trinity Center for a debut non-London show from Pure Love, the new project from ex-Gallows man Frank Carter. The semi-anthemic nature of Pure Love’s material translated well to the live show and the crowd was made up largely of diehard Gallows fans who adore any work of the tattooed front man. The songs are a tad cringy, none less than lead single ‘Bury My Bones’ which gets a substantial sing along. Their only live dates in the UK aside from Dot to Dot are supporting Biffy Clyro which sort of figures. Maybe Pure Love won’t recapture the intense following that Gallows gained but Carter seems chuffed with the crowds who flocked for his new offerings.

Over at Thekla, the day was warming up with a set from a band called Peace, they appear about as hard to google as Tribes, Yuck and The Internet but eventually you’ll find that Peace are a Birmingham four peace who The Guardian called a hybrid of Foals and WU LYF. They strut on and pose accordingly with Lennon sunglasses and undersized leather. Their music is nice to listen to, shady bubbling tones underneath fairly howling indie rock. Stand out tracks include ‘Bblood’ (no typo there) and the spacey ‘Lil Echo’. They have a small hiccup when a rhythm guitar fails on them and their lead singers short interlude about “Not being really here” is less Foals and more Kanye but Peace put on a good show. What impressed me most was the ‘Merchandise’ link on their website being a direct link to an EBay search for ‘Peace’. Funny, right?

O2 Academy was playing host to the festivals solid headline slot from The Drums but earlier in the day it became a tie-dye trashy bonanza when Wavves brought their scuzzy San Diego charm to a rainy Bristol. For the Wavves novices, this set would have sounded indisputably repetitive with their bullish garbage punk being more a product of sound than song. Their mosh pit is the best of the day, the turbo-cool nature of front man Nathan Williams provokes a desire to impress him amongst fans with utter madness. Tracks like ‘Idiot‘ and ‘Post-Acid‘ all maintained the frenetic pace of the crowd but the setlist was an insignificance. Wavves came to kill, and everyone sort of died. For all 3 cities, the Californian surf-rock will have come up trumps.

Surprises of the day came from the packed out audience watching The Petebox (Britain’s most credited human beatbox) spit through a set of Eurythmics covers and some original material that is set to contribute to his upcoming LP. Downstairs in the Louisiana bar saw MAYANS muddle through a set with swapped around lineup that still captured their spacey and quite fantastic sound proving their localized tip-offs could be bigger than just the south west. Later at Thekla, the muffled synthesized sounds of Kwes fail to get the dancefloor they would on record which is a shame when the tracks sound so polished. It would seem the Kwes live experience needs a bit of rethought as fans are left somewhat deflated by the set.

Then came the highlight of the day, Willis Earl Beal was “drunk”, “irritated”, takes himself “very f**king seriously” and “just got out of prison” (he kicked a dutch tramp in the head the other day). There were moments when his irritation and crowd chitter chatter teetered on the age of being frightening but when he sings, when he bellows the soulful and rough tones are like nothing anyone has ever seen. He is one man with a guitar and a tape player but his renditions of songs like viral hit ‘Evening’s Kiss’ as well as album tracks like ‘Take Me Away’ and ‘Swing On Low’. Beal is a forced to be reckoned with. His angst and forbidding nature give his rough music a gravitas and almost threatening grandeur. He gives a free LP to a fan who sings along to every word of ‘Evening’s Kiss’ and leaves the stage amid a rush of cheers. Willis Earl Beal’s whiskey swigging blues is not a novelty but more a considered, and threateningly good sound.

As the night became the morning The Internet took to Thekla’s main stage with their third live show ever. Syd Tha Kyd unfolded a laptop covered in OFWGKTA themed stickers and whilst Syd seemed to be proud of her Odd Future beginnings – “this track was produced by my friend Tyler, you guys know him?” she seemed to revel in playing through tracks fro their debut LP ‘Purple Naked Ladies’. Mellow tracks like ‘Cocaine’ and ‘She Dgaf’ saw Syd wonder around the stage from side to side being a more confident front woman than might be expected. Their set is all too short, they slink off the stage even more chilled than when they came on. This is effortlessly cool, Matt Martians and Syd Tha Kyd prove, like Frank Ocean that escaping from the gimmicks of Odd Future is a real possibility.

Over with the headliners, The Drums do what The Drums do. Melancholy anthems that keep the energy of Dot to Dot alive. ‘Let’s Go Surfing’, ‘Best Friend’ and ‘Money’ demonstrate the songwriting prowess of the band alongside a crowd that shows they will always have an audience. They send off Dot to Dot in the best way possible.

Walking home, you can see timetables lying on the pavements and half drunk cans scattered outside venues. It was a hard day to organize with upcoming sets from acts like Peace and Mayans juggled with the major label followings of Earl Beal and The Drums. Whilst the day belonged to Willis, it was shared out pretty nicely. As one day festivals go, The Drums are fronting the best roster of 2012.