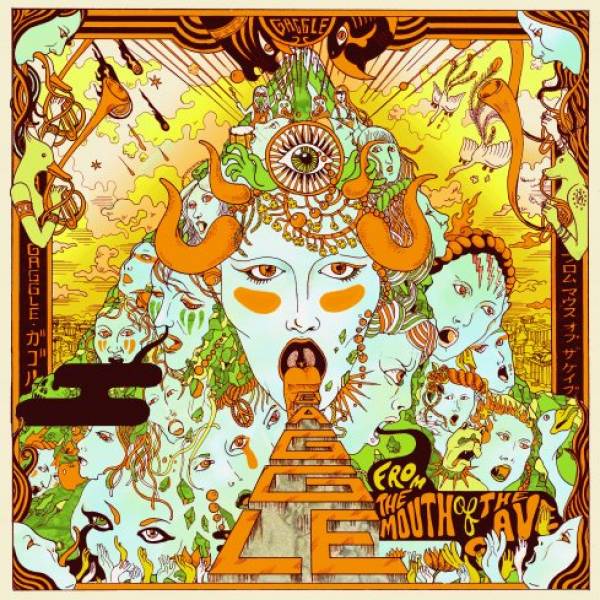 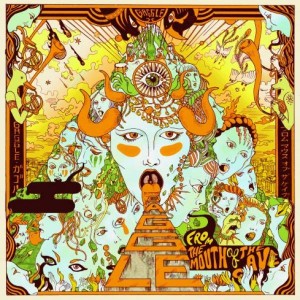 The all female ‘flock-of-Shegulls’, Gaggle, cast their nets wide for the debut opus, From The Mouth Of The Cave. Immersed in a polygenesis maelstrom, both musically (from  Malcolm Mclaren‘s Buffalo Girls to the Polyphonic Spree) and culturally (atavistic primal rage to Amazonian Congo warriors), Gaggle have thankfully broken out of their own esoteric, ‘power-choir’, straightjacket robes to offer up a few surprises.

But first, the epic menacing, Biblical scale atmospheres, which we’ve come to expect, are brought in for the opening, self-titled introduction. Chained together, heaving a giant prop through a MGM film studio vision of ancient Egypt, the brood toil and wail to the swaying slave master’s drum, before breaking those bonds to skip off into the sunset on an uplifting Arcade Fire-esque high. Lingering apocalyptic tones and omunious threats permeate throughout, especially on the Italian B-movie horror meets Hitchcock frenzied stabbing Gaslight, the girls chanting like a murderous gang of cheerleaders. The knife hits home on the even more unsettling Liar. A Hogarth etched cackle work themselves up over a cheating partner; the fatal blow finally struck, punctuated by a clash of cymbals. Carrion circle overhead on Crows -though at times the backing is more Sly & Robbie Carribean strut than gruesome gothic nightmare – as our sirens wail and bemoan a choral attack on some poor unfortunates.

Despairing of politics and war,  Gaggle’s most evocative, and best song to date, Bang On The Drum, surveys the battlefield as a rasping, throbbing synth baseline, searing strings and swooning melodies raise and fall: an escape from the groups usual bombast. Hearty and plaintive, it takes time to build from the atmospheric foliage at the start, but gains momentum and beauty as it goes on; perhaps their most ethereal moment yet. Further broadsides at the man continue on the timely tropicana, Grace Jones, sauntering, Power Of Money. Simplistically echoed in unison, the “I hate the power of money/How can a rich man be above the law”, mantra is delivered with an ‘uptown rankin’, swaggering, naivety. Happy Is A Country is a similar protesting cry from the wilderness, backed with UNCLE drum-breaks, sloping bass and gibbering Theremin.

There are the occasional messy sound clashes, and a far too heavy reliance on the 80s, but as a whole the Gaggle’s brand of vociferating, chanting and, even singing lullaby’s, proves that theres plenty of scope and desire to experiment.

2 thoughts on “Gaggle ‘From The Mouth Of The Cave’ (Transgressive)”