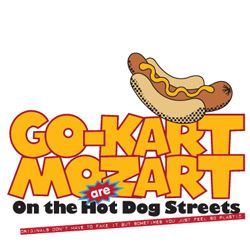 The first thing you notice about On The Hot Dog Streets is just how good it looks.  Glossy cover, very pop design (lettering inspired by the Clockwork Orange soundtrack cover).  Slogans, beginning with “Originals Don’t Have To Fake It But Sometimes You Just Feel So Plastic” on the cover, and instructions are littered throughout the inner sleeve and lyric booklet.  On the back of which is a list of books read and music played during the making of the album.  As well as other indexed ideas, including “Immense Song Titles Made Up By Me (Unused)”, good names they are too, and an idiosyncratic personal ad at the bottom.  All records should contain such things, it presents a much wider picture, and lets you know that what you are holding is important, something to engage with, on many different levels.  And what is particularly great about this album is that everything about it – the music, the artwork – declares ‘THIS IS WHAT A POP RECORD SHOULD BE’, which is something all pop records should do.  Pop music at its best is both disposable and eternal, completely of the Moment, and at that moment demanding your full attention.

Which Lawrence continues to do with the music.  It is rare to be utterly surprised when putting on an album, but the first song, Lawrence Takes Over, was completely unexpected.  Beginning with what sounds like cheap synths playing something off the Red Hot Chili Peppers’ Mother’s Milk album, it’s downright baffling.  Moving off into a 70s soft rock section, followed by an episode of pure Englishness (think The Damned’s Grimly Fiendish), and a stadium rock guitar interlude, before heading back into the full-on rock of the beginning but with it somehow all making sense now.  Shocking moments continue throughout the record.  Lyrics such as “The guy you are about to pick up is gonna die from AIDS” (Retro-Glancing) or “I’m still susceptible to vaginas’ allure” (I Talk With Robot Voice), or checking what song is playing that has this particularly catchy chorus and finding out it’s called Spunky Axe.  But unlike lots of younger bands whose intention is solely shallow shock tactics, you can tell that with Lawrence there is more going on, that these elements are only part of the greater whole of his artistry.

As with Denim (and indeed, eight of these songs were originally recorded for the unreleased fourth Denim album, Denim Take Over, with others of those ending up on the second Go-Kart Mozart LP, Tearing Up The Album Chart), the songs hark back to 70’s pop and glam, infectiously so, though played with the distinctive synthpop and electric guitar sound we’ve come to associate with Lawrence.  The seventeen songs flit between upbeat and mid-tempo, with choruses you want to sing along to almost immediately, and the album’s two mellower numbers – As Long As You Come Home Tonight and Men Look At Women – rounding things out nicely.  And the lyrics, despite the chanting quality of titles such as Ollie Ollie Get Your Collie or Come On You Lot, are always intriguing, thought-out, a vital component.

There’s been a lot of talk about this record, it took eight years to make, with a film (the excellent Lawrence Of Belgravia) documenting that process. It could very easily not have lived up to its reputation.  But it does.  It’s a statement worth hearing, and one whose songs will be stuck in your head for weeks to come.