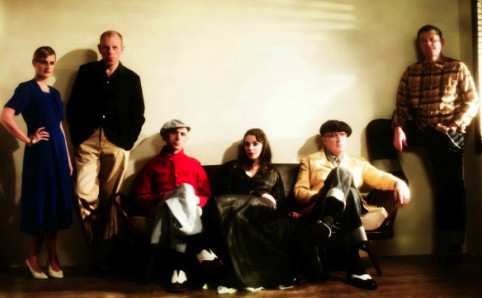 Love poem>> ‘sometimes I almost envy the need but don’t see the prize.’ This love poem from the ‘Young Soul Rebels’ album recites an insightful line about motivation and desire.  In producing this album and tour, Kevin Rowland definitely found the inspiration and impetus to bring it all together.

Tonight’s show takes place at the Barbican and it’s like a bunch of noir style gangsters have gate crashed a Vaudeville theatre. The guys are dressed in slacks and brogues, Kevin in trilby straw hat and Hawaiian shirt.  Helen O’Hara plays violin, a dancing violinist she stands in the same spot, centre stage. The drummer, a Matt Lucas look-a-like wears a red stripped Breton top and sailor cap. The whole thing runs as a performance, a relationship therapy session, exploring stages of love, interest, infatuation, lust, abandonment, apprehension, but never quite reaching the ultimate goal.

The set starts with him being, ‘So Lost,’ moving into the song ‘Me’, which concentrates on issues of fear, loss and paranoia. In ‘She Got a Wiggle,‘ Rowland and Pete Williams discuss this woman, they build her up into a kind of obsession. These subconscious ideas are directed to the Lauren Bacall-style image of vocalist and actress Madeleine Hyland who is projected – finally! – on to the screen.

Meanwhile, in ‘I’m Thinking About You’, Rowland puts everything into the performance, emotionally his whole body seems to feel every word, fingers flicking wildly. As Madeleine Hyland moves exotically around the stage, ‘I’m Always Gonna Love You’ declares a mutual admiration, until eventually fear takes over and it all comes tumbling down.  Having won her over, he leaves her crushed and abandoned, literally on the floor. The real drama and tension takes place, as she exclaims ‘Just go!’.

‘Incapable of Love,‘ is more of a meditation on why stuff turns out this way and what exactly is freedom anyway. ‘Nowhere is Home’, is more down-tempo, with Rowland crooning about lacking the strength to confront your demons, being free and running. In a Carrie Bradshaw-narrative style way, the set makes you consider questions, what is it that takes us to the real thing called love, more than an infatuation. Is it really an obstacle to freedom, or is the obstacle fear, the reality of trusting someone that much, a split between infatuation and love?

The second part of the show moves into some classic Dexys songs. It starts with Pete Williams, dressed as a police officer, asking for a statement, as Dexys move into the brilliant ‘Tell Me When My Light Turns Green.’ Other stand-out tracks include, ‘Come on Eileen,’ ‘I couldn’t help it if I tried,’ people jump up, as these songs resonate with the crowd. Requests for ‘Geno’ fly around the stadium, but aren’t met.   A brilliant show, as Kevin Rowland shares his feelings in this musical style cabaret.