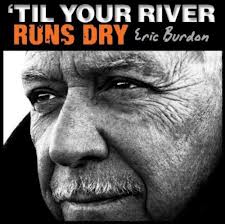 Wallowing in his natural Louisianan Delta environment, Eric Burdon posts a liturgy of protestations against his adopted US home on the blue’s cradling new album, Til Your River Runs Dry.

Promised to be the great guttural howling maverick’s most personal to date, the former Animals’ leader and front man of the psychedelic funk troupe, War, certainly hasn’t mellowed with age. A comeback that first began in 1995, with subsequent releases following at will, years apart, stalled again in 2006 (Soul Of A Man): a gap he shares with two of his generational peers, Scott Walker and David Bowie, who’ve also chosen to show their heads above the pulpit in the last six months.

His return is a timely one, appearing as it does on the eve of The Animals’ 50th anniversary – ABKCO will be doing the honours with a catalogue of complimentary release tie-ins. And a third volume of memoirs is also ready to drop.

Despite humble beginnings in Newcastle Upon Tyne, Burdon’s heart was always tied to America, not just musically but culturally too; or rather it belongs south of the Mason-Dixon line, finding common ground with the sagacious bluesmen of lore.

Carrying a ‘burdensome’ load, our disgruntled journeyman’s liberal rhetoric is given a glib platform from which to preach. Half, faith tested, holy man, half political campaigner, Burdon narrates his way through society’s ills, remaining calm and at ease as he settles into his meditative swing of hallowed blues and gospel.

Making no secret of his admiration for Obama, on the Bo Diddley standard arranged ‘Invitation To The White House’, he dreams of an audience with the president. In what can often lack subtlety, Burdon offers a cure to America’s problems, even if they seem a little naïve.

Forgiving the present administration’s own failures, the main vitriol is aimed at the Republicans – not just the last shower, but hinting right back to the Vietnam era.

Sounding like something Mark Knopfler might have scored for Auf Wiedersehen, Pet, ‘Memorial Day’ is a resigned plaintive observation on Afghanistan, Iraq, and to some extent, all of America’s oversea campaigns: “It’s a rich man’s war, but the poor will pay.”

Used to gently acclimatize the listener, the opening ‘Water’ should set out Burdon’s stall, with its’ chorus, “The enemy does not know who the enemy is.” Not exactly the most challenging of lyrics, there are plenty of these wise platitudes, the kind that only Burdon could be allowed to get away with, to be found.

‘In The Ground’ mixes its burial and oil metaphors poetically, whilst ‘The River Is Rising’ could be read as a veiled, William Faulkner-esque, psalm to the after effects of Katrina, and the constant prevailing threat of floods in the deep south.

In reflective mood, Burdon muses on the tragic, sad loss of his musical peers on ’27 Forever’. The lifestyle cocktail of fast living, hard loving, drugs and wild whiskey took quite a few victims with it. Conspiracy theorists can draw their own conclusions, but it is a strange phenomenon that so many iconic artists (Brian Jones, Janis Joplin, Jimi Hendrix, Jim Morrison) prematurely met their end during the golden era. Burdon mourns their passing.

There’s also a less mournful, but still a graveside tribute to the blue’s patriarch, ‘Bo Diddley Special’, which riffs on The Animals’ original ‘The Story Of Bo Diddley’.

Dropping his guard, Burdon moons about with a faux rock’n’roll apache beat and church service organ, eulogizing about his old friend. The knock-about tone is affectionate, and offers some amusing descriptions of both the man’s legacy and look: “He had a hat like a plate of fish’n’chips.”

Another legend of the Delta and surrounding New Orleans bastion, Taj Mahal, looms large too. Burdon’s playful mosey ‘Devil And Jesus’ bears witness to the twangs and nuanced flicks of Mahal, and the closing ‘Before You Accuse Me’, is a ‘Statesboro Blues’ suggestive mark of respect.

The river sure ain’t run dry yet, as the elder Burdon proves, baring his teeth for a remonstration with ‘the enemy’ and delivering an smooth rich blend of soulful, country and spirited blues.