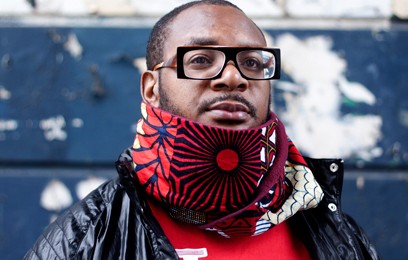 Out 8th April, “Kick Snare And An Idea Part 1” is the first of two upcoming singles under the “Kick Snare And An Idea” banner, from the Mercury nominated producer, rapper and all-round preternatural musical talent that is Ty. Marking the next step in an illustrious career, Ty signed to Tru Thoughts in January, sparking Music Week and CMU news features and high anticipation for new sounds from one of global hip hop’s best loved independent artists.

The lead track on this single, “Like You Never”, is a deep and multi-layered cut that finds Ty setting out his stall and airing his concerns about the state of his beloved music scene today, his philosophical and measured flow carried up on a euphoric melodic hook to a resolute chorus. The upfront video premiere for “Like You Never” was met with a Twitter storm, over 20,000 YouTube hits in a week, and official Playlisting on MTV Base.

Two more brand newies showcase Ty’s fabled versatility: the sparse, loping beat and laid-back fluidity of “Knock Knock”, and “Playing With Fire” with its staccato delivery over a melodic, dreamy soundscape. The latter track warns of the dangers of ignoring and undervaluing people, especially the young; fittingly it features celebrated rapper and poet Akala and grime MC Durrty Goodz, these younger performers each coming with a verse and injecting Ty’s fresh yet timeless sound with a vibrant, urgent hit of grime. Ty describes Akala – whom he first hooked up with on the 2010 Nas and Damian Marley ‘Distant Relatives’ tour – as “very influential, a leader. He’s driven, intelligent and talented.” He continues: “And Durrty Goodz expresses so much. The way they came and made the record – I wish I’d filmed it! They got it straight away. It’s gonna talk to the youth audience.”

While many know Ty simply as a great rapper or MC, he has always been involved in the composition and production of his music, and this has deepened over the course of his four albums (also leading to additional work for Scratch Perverts, Talib Kweli, Blak Twang and Arrested Development). These new Ty tracks, co-produced with long-time collaborator and musical brother Drew Horley at his London studio, have Ty’s DNA running right through them from beats to composition to lyrics. Elaborating on his creative process, he says, “The music comes first. Then the music calls out and says ‘THIS is what needs to be said’. The music, always, is the boss. Beats are personal. Everything starts at home, late at night…I have an idea, I get it down, and then we build on it in the studio.”

If there is one thing we can predict about Ty, it is that he will never be predictable. While a lifelong love of hip hop initially set him on his path, Ty’s influences come from prog rock, jazz, and strange records of all descriptions. With a reputation built on his originality and instinctive refusal to hop on any industry bandwagon, he is known for his frank and honest lyrics which have set him aside from much mainstream hip hop and allowed him total artistic independence. In 2001, Ty signed to Big Dada to release his acclaimed debut album, ‘Awkward’. 2003’s ‘Upwards’ then won him a Mercury Prize nomination, and the attendant media attention; and ‘Closer’ followed in 2006, again to many plaudits. Since his fourth LP, ‘Special Kind of Fool’ (2010 via BBE), Ty has featured and collaborated with acts all around the World, including a recent track with former Radio 1 DJ and producer Kissy Sell Out. Also respected as a spoken word artist, in 2012 Ty was asked to perform and host workshops for the British Council, culminating in the end of a 35 year halt on international performers in Port Sudan. He is also a member of The Hip Hop Shakespeare Company – having become involved at the invitation of Akala – running workshops with young people to show the influences of Shakespeare in today’s scene. Recently, Ty founded the Beat Inn, a Facebook group where beatmakers can share their creations. “It was a case of finding somewhere people could communicate this fanaticism with making music. A lot of people share this love affair, and I tip my hat to anyone who appreciates that process”. Now with over 1600 members, from bedroom producers to international stars, it clearly struck a chord.

Ty, how are you? So how does it feel to be signed to Tru Thoughts?

Is a great look but also a great responsibility  for me….

It’s not like all the doors fly wide open ….we still got work to do

You’ve been around for quite a while and in my mind you really hark back to the old days of hip hop when people actually used vinyl to make tunes [as per your track ‘Like You Never’’] Should we really go back to the days of scratching and Pac Man?

Not sure how to take I’ve been around for a long time. I make music… Period..

Should people hark back to olden days….. .? That’s not the message that I’m trying to get across with this song

It definitely not about going  backwards to move forwards

If the cultures lacking? Address it.. Is far too important to let it just shrivel and fade away

You were nominated for a Mercury Prize in 2003 for ‘Upwards’ Do you think the Mercury awards are a true representation of British music THESE days?

It’s nice to get your work noticed.. Is what all artist want to happen

I’m sure there are other platforms for validation now .. The more the merrier in my opinion

How do you personally like to make an album?

Albums just fall out of the person…. Some people depending on how they work can be technical and write down the themes etc….. But my brand is about my personal truth

I don’t repeat formulas or songs.. Or sounds… I try to just make music…… Not repeat prescriptions

Your music has been described as frank and honest….how to you differentiate yourself from the American ‘bling’ culture of American Hip Hop? Is it far too saturated now?

I don’t seperate myself from anything….  Whatever everyone is doing is fine for them…. I do me….   This new relationship with Tru thoughts is gonna allow me to do whatever music I feel like making…. So what is occurring in other circles doesn’t really need to be put down by me… ‘LIKE YOU NEVER’ as a song has been received especially well lyrically and musically and it’s the best feeling when you don’t have to explain your standpoint and your music does it for you….

You have also worked with a wind range of artists – Scratch Perverts, Talib Kweli, Blak Twang and Arrested Development and on the late Amy Winehouse Tribute, what draws you to work with certain artists/ producers?

I don’t make working with other artists a priority…. It’s not the first thing that springs to mind  it’s always about the music for me.. What does the song need….  Do we need sounds other voices other textures… I look at making music like   a painter looks at a painting..

I also very interested in your Spoken Word work, and your workshops with young people, showing the influences and works of Shakespeare in today’s music scene. It’s funny, but recently my 73 year old father said ‘Look, good Hip Hop is like Shakespeare, I just don’t like it when they shout at me’ Made me chuckle, but I’ve always seen the correlation between the two as well. How do you think the two correspond with each other?

I guess the first part of my answer would be… Is Shakespeare the only poet we should use to compare hip hop writing with?

When working with  Hip Hop Shakespeare company .. What we try to do is break down young people’s perceptions of  Shakespeare as being posh and something for the upper classes only .. Which he wasn’t …. I think hip hop suffers the same problems in reverse.. People think hip hop is only for a certain type or group of people… It isn’t..

We engage young people to appreciate that there are similarities in the themes Shakespeare wrote about about  and the current songs they listen to… Ie …love and desire,, consequences, power struggles… In modern music and tv,film

And we have fun with it…   It’s fun to break down the  rhythms  within sonnets. Most children are not aware of how rhymic the sonnets actually are….. Iambic pentameter etc etc

Your first EP on Tru Thoughts drops in April, will there be live performances/ a tour to back it up?