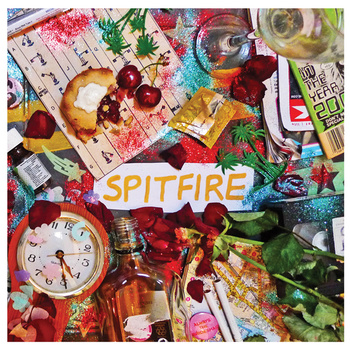 With the aid of an incredibly successful Pledge Music campaign, self-proclaimed “starry-eyed pushers of edgy glam-rock pop”, Jonny Cola and the A-Grades, deliver their second album ‘Spitfire’ to the masses. Well, at least the Internet masses.

As the band’s name suggests, the album is a pull-no-punches festivity of glam-rock anthems that takes delight in pick-pocketing the pomp and flamboyancy of the artists that spearheaded the original movement. The first thing worth noting about this album is its low production value. As mentioned beforehand, Spitfire was not backed by an established record label but rather funded through fan interest which ultimately shows come the final product.

Frontman Jonny Cola’s vocals hold up nicely as does much of the guitar work but the same cannot be said for the bands rhythm section. Drummer Marco Testa-Ryan’s work often appears distant and tinny lacking the body and intensity an album needs to stand toe-to-toe with any of this year’s rock records whilst bassist Simon Drowner is practically non-existent throughout.

With that said, the A-Grades arrive in style with their opening track ‘In the Woods’, a grinding sexy T.Rex/Thin Lizzy inspired riff that does well to set up the rest of the album. The Bowie-enthused ‘Tropical Beach’ is quick to capitalize on the band’s momentum delivering light-hearted familiar melodies that make this arguably the stand out track of the album.

Cola’s fascination with all things Bowie continues with newly released single ‘Straight to Video’ featuring a near perfect impersonation of the godfather of glam himself along with customary spacey wiring guitars and crashing symbols. Everything about the cut is so rich with Ziggy Stardust animated vibes that it’s enough to pre-empt Cola’s next line at any point to be “…and the spiders from Mars”

It is at this point that the A-Grades fail to detach themselves from Bowie’s almighty influence with tracks such as ‘Going Over’ and ‘Sunset Sunrise’ appearing as nothing more than cheap synthetic knock-offs whilst ‘Rain Stopped Play’ and ‘Wronghead’ flounder as album filler rather then the band taking time to explore any wild and exotic avenues. Perhaps the most discouraging track on the album is ‘Blow Up’ a song with the arrogance and sex appeal of a T.Rex anthem straddling atop a Gary Glitter-like strut that undeniably had the potential to be the records break away hit. The song is separated into three sections, each quintessentially glam in their own right but unfortunately result as a clumsy misguided mess when spliced together.

The only real sign of improvement for the A-Grades is ‘Semaphor’; a track automatons from the rest for its darker tone and Cola’s ability to finally convey a sense of individuality to his voice. Wonderfully assisted by a series of ghostly backing harmonies, the track also features Mauro Venegas and Jez Leather’s best guitar work making this the sleeper hit of the album. ‘Out of the Woods’ closes the album and is the perfect summation of the bands love affair with Bowie. The lyrics are an awkward ode to ‘Space Oddity’ as if written by a fan after Bowie had carelessly described his idea of Major Tom. The sweetly sad backing strings that accompany the fluent guitar work is catchy and delightful in places but not enough to save this overly conscious track.

As a whole, ‘Spitfire’ fails to deploy the glittery thrill ride the band had set out to achieve. Much of the album sounds like a “Greatest Hits of Glam as Recorded by…” CD whilst the rest manifest as the rejected notes left on David Bowie and Mark Bolan’s studio floor. Yes the album is typical of all the glam-rock conventions but something about this album tells us that even in the heyday of big hair and glittery face paint, Jonny Cola and the A-Grades wouldn’t have amassed to much.