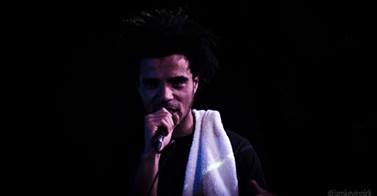 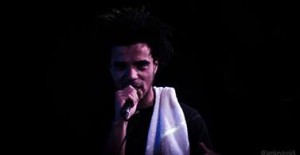 Performing to a crammed, enraptured audience, Hip hop MC, poet and preacher Akala shook the foundations of Cardiff city’s Moon Club tonight. Akala has the crowd in awe and nodding its head, as he takes us with him on a journey through his catalogue, rooted in social consciousness forged from his difficult North London London upbringing, Akala’s plugged into political awareness and an appreciation of the struggle of slavery of not just his own mix of Caribbean/Scottish heritage but the injustices of a unjust political class of bankers, dictators and out of touch rulers at home and a global concern that reaches around the impoverished and forgotten corners of the third world. Backed by a simple old school beat from drummer  Cassell ‘The Beatmaker’ (The Streets), warm vocal contributions and piercing strings: Akala gives them voice through his skillful flow each syllable fires like a cannon breaking down walls of privileged at one moment, and lyrically connects poignantly and personally at others. 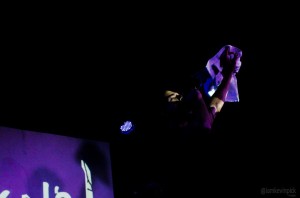 ‘KNOWLEDGE IS POWER’ he enunciates with a point of the hand like the preacher on the corner,  black tee shirt and white towel over his shoulder like the boxer ready for the bout ahead. Armed with a set of parables, the self proclaimed Black Shakespeare has come here to teach us not to feel inferior because of the way we speak or the position we hold in society or the colour of our skin. Before delivering the powerfully affirmative history of black struggle anthem ‘Malcolm said it’ with its soulful sample chorus line ‘If you ain’t got something to die for you never lived’.

While “Comedy Tragedy History” with its urgent strings and skittish Shakespeare referencing spit and fire delivery is positively incendiary,  it makes Plan B‘s recent work sound second hand and mundane. While the excellent sinister sizzling beat of ‘Shakespeare’ that’s part chest beating affirmation and contemporary baiting, menacingly burns up his 2005 grime history,  orchestrates a crowd of sweaty bouncing hands up revellers for the fiercely insistent 2013 single  ‘Lose Myself” the poetic flow of self empowering verses laced with the vocals of Josh Osho give way to the rock stomp of the chorus. Returning to a mixtape from last year he gives us ‘Absolute Power’ a crushingly brutal anthem that sneeringly plots out inequality that spans every strata of society from the struggle of his own upbringing on the streets,  to the injustice of those who can’t afford to eat, and the lack of education that wastes the talent, to poverty and unfairness and waste of war(“Cats and dogs in America and Britain/Eat better food then most of humanity /We spend our technology only on killin’/ How is this more than sophisticated savagery”) , following up the thread later on he’s telling metaphorical stories of four thieves of evil (A greedy Cartel of bankers, privileged monarchs of empire, Brutal selfish Third World Dictators and perverted religious orders ) on the superb ‘The Thieves Banquet’ from this year’s album of the same name,where Akala colourfully inhabits each thief in a rap battle off: to tell the all too prescient tale of corruption of power to a ghoulish sway.

Because Akala holds us all so closely in his spell as he teaches us about not just  the struggles of his past but injustice, inequality and positive action it’s fitting that when Akala is informed of the passing of the late great Nelson Mandela he calls for 30 seconds silence which is impeccably and respectfully held. Later he showcases effortless free styling taking crowd suggestions, managing to skilfully and wittily thread together phrases as disparate as ‘Hysterectomy’, ‘Fuck Nato’ and ‘Bin day Wednesday’…. 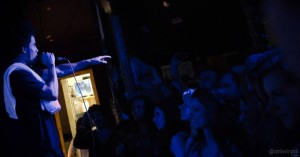 ‘You can keep the charts all I want is your hearts’ Akala chants as he climbs the side of the stage offering his mic to call and response of the front row during the bluesy licks, drum fills and soulful crescendos of closer ‘Find No Enemy’. A searing burnt manifesto, a critique of ‘urban’ music culture that concentrates on ‘tits and arse’ that forgets its blues history (Miles Davis, Hendrix, Billie Holliday) and celebrates ‘Clowns that swing their dicks around’ that Akala is the absolute antithesis of all of these commercialised stereotypes, that his voice is raw and authentic, his music stripped back to the old school, his words brutal and challenging of the class divide, all of this makes him one of the most important figures in UK Hip hop in 2013. And tonight in this dark corner of Cardiff he is our empowering leader.