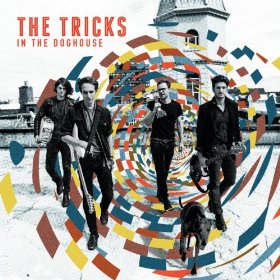 Welcome to another music in a different bedroom. The bedroom in question is that of John Bisset, guitarist and one quarter of The Tricks;  the music is that of the band, ‘Better (Bedroom Sessions)’ being one quarter of their recent ‘In The Doghouse’ EP.

By way of contrast to the other three songs on the EP, the Bedroom Sessions was not recorded at Unison Music Studios in Los Angeles but in the presumably more prosaic sleeping quarters of Bisset’s home in New Cross. The ambience of the room as captured on the song’s accompanying video is one of a casual, dishevelled vintage, and this feeling of slightly battered insouciant charm is what this acoustic version of the EP’s lead track/single ‘Better’ is really all about.

‘Better’ is an unashamed slice of relaxed vocal and guitar harmonising, into which elements of Blur, The Clash and even Springsteen have been distilled. Out of this fermentation process has come a sound much less concerned with protest than it is positivity and yet for all of that it still maintains a strong essence of rock n roll. It serves as a most welcome harbinger of next year’s début album from The Tricks.

The Tricks’ ‘In The Doghouse’ EP was released on 28th October 2013 through the Unison Music Group. The video for ‘Better (Bedroom Sessions)’ was published on 3rd December 2013.