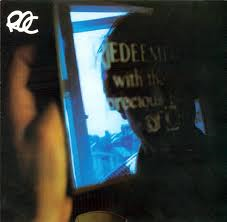 To quote a song title by The Fall, the arrival of the debut R.O.C. album in 1995 was clearly a case of ‘Right Place, Wrong Time’.

The London-based three piece were pushing forward by meshing guitar music with samples, beats, special effects and found sound field recordings. Little did they know that indie was about to start looking backwards and inwards with the advent of Britpop.

Not that that would have stopped them. In fact, the total absence of tactical careerist positioning is one of the things that make this album, lovingly reissued and pressed on vinyl (as well as CD) for the first time, such a refreshing listen some 19 years later. Perhaps people might be confused by a band with two lead singers, especially such contrasting voices as the softly caressing Karen Sheridan and the disturbing stream of consciousness of Fred Browning. Perhaps they might be disorientated by a band capable of the satanic grunge-sludge of ‘Excised’ one moment, and the hip-hop beats and sublime stoner pop of ‘I Want You…’ The next.

Er, deal with it, seems to be their resolute response here. Catchy as hell classics zip by – see also the crazed funk of ‘Hey You Chick’, slo mo opener ‘Desert Wind’ and euphoric climax ‘Hey Nicky’ – all interspersed with nightmarish interludes. Everything you want out of a great album, in short.

With a new EP for Metal Postcard in the pipeline, and their first live shows for some length of time also happening, perhaps the time is finally right for R.O.C. to get what’s due to them. Right place, right time, right corker of an album, you might even say.