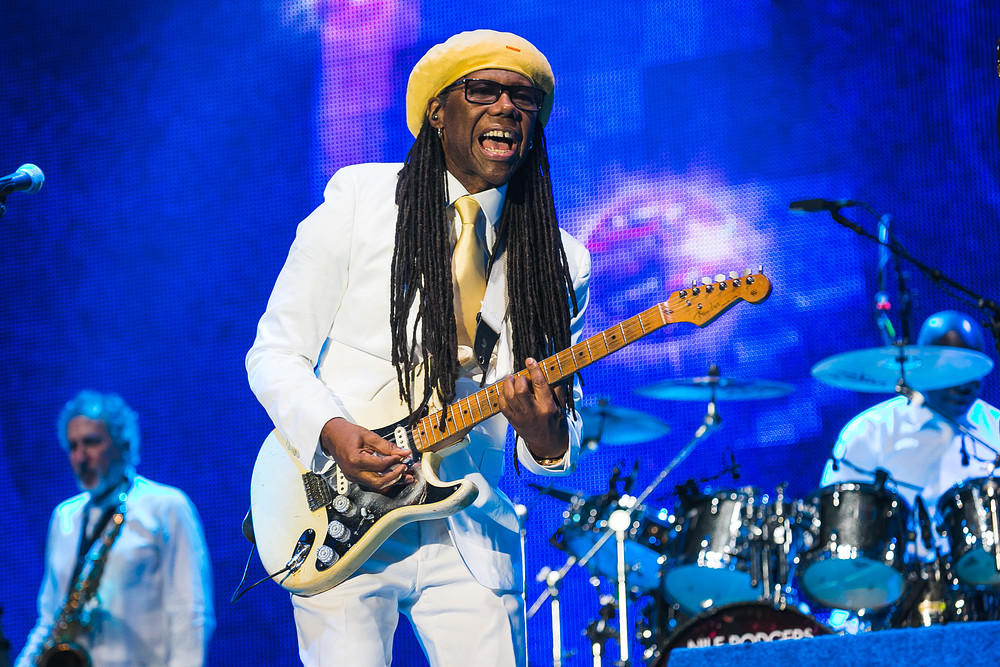 It was a weekend of firsts and lasts around Robin Hill Country Park on The Isle of Wight – and a hill it certainly is, with barely a level surface onsite. The last major festival of the UK circuit of the year, and its twelfth incarnation, came to a close on the Sunday night by lifting a Guinness World Record title for the worlds Largest Disco Ball adding the finishing sparkle to the Desert Island Disco theme. Measuring an incredible 10.33 metres in diameter it was verified by an official adjudicator and later illuminated and raised on a crane for Chic’s huge blowout festival finale. Rob da Bank made the announcement that this was to be Dan le Sac and Scroobius Pip’s last ever gig together as he introduced their Big Top set. Foals also announced their last show for eighteen months during their headline Main Stage set on the Saturday.

Thursday night saw Beck take to the stage of The Big Top wearing a leather jacket, black wide rimmed hat and Hawaiian shirt. The enormous open-sided tent was spilling out into the adjacent fields with fans trying to see the show. Opening with Devils Haircut and following up with Loser it fast became apparent that Beck meant business when it came to getting the crowd moving. The set featuring some amazing visuals also saw the band giving a medley of covers including Donna Summers and The Rolling Stones while introducing each member of the band. A trek back out of the main arena area and into the campsite territory found Uncle Acid and The Deadbeats announce to the Invaders of the Futures tent “We’re here to ruin your night” before literally launching an aural attack on the crowd. There’s no doubting these guys musical ability and there’s a good mix of old and new influences from Sabbath and Thin Lizzy through to BRMC. 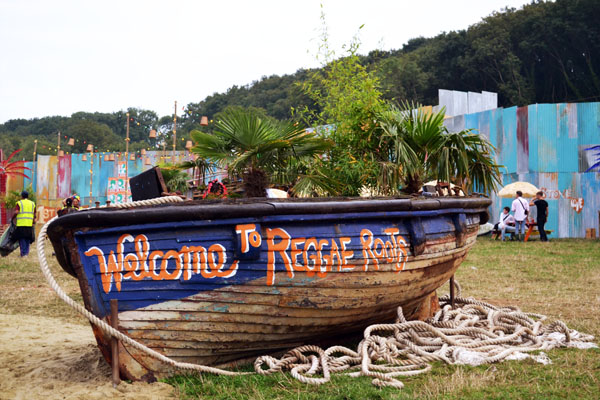 Friday saw some socially aware rapping, female backing vocals, dual Akai MPC5000’s all nicely rounded off with some live drumming courtesy of FTSE – effectively the work of Sam Manville made suitable for live consumption. With lyrics about our addiction to mobiles and with faces hidden under headscarves there is something of the angry, disengaged and unhappy youth captured perfectly for 2014’s electronic generation.

Brian Shimkovitz has run a pretty self–explanatory blog named Awesome Tapes from Africa for nearly a decade. Here he provides the soundtrack to the lunchtime Bollywood Tent by running through some of his vast collection of tapes for the crowd. The tent was fairly busy, only a handful were even on their feet and fewer still were dancing which was a pity because the tunes being played were definitely for dancing to. Boston, Massachusetts’ Bad Rabbits brought their hybrid of R&B and Rock to The Big Top. Not a huge crowd but vocalist Fredua Boakye knew how to get the people on side and demanded the audience split in two whilst running up and down the centre dancing.

The mesmerising Vaults took to the Invaders of the Future stage slightly late with the singer in a dazzling orange dress and quickly got in the swing. Electronic beats and haunting keys coupled with live percussion, accompanied by the absolutely note perfect lead female vocals and a string trio to boot really is a fine combination and live they really shone. tUnE-yArDs unmistakable sound went down well in The Big Top. The off kilter vocals and looping of Merrill Garbus is something altogether more impressive when it’s happening live. Headlining the Main Stage were hip-hop duo Outkast. Thousands had gathered on the hill that stretched back from the stage to watch and were more than happy as they launched with B.O.B. With Andre 3000 dressed in an all in one tailored black jump suit and a white Ike Turner looking wig along with Big Boi in a military jacket and shorts they looked every bit the international superstars they are, and began to prove they had the hits to match as they tore through Gasoline. A lengthy set meant they spent a fair amount of time teasing the crowd with names similar to Ms Jackson before playing the hit and in the end they cut the set shorter than the allocated two hours but no-one could accuse them of slacking. 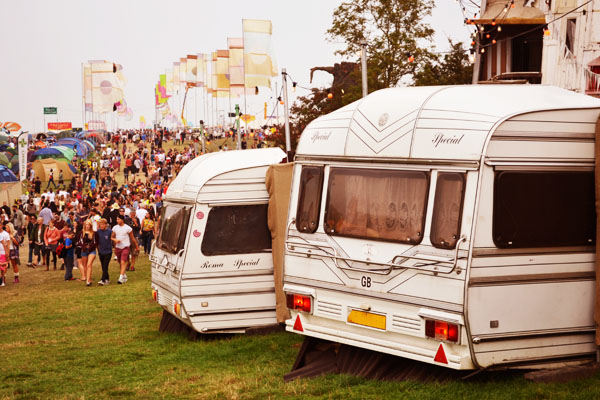 Saturday afternoon saw The Cuban Brothers rip up the Main Stage. With their blend of hip-hop, good times, breakdancing and close to the bone humour they really were outstanding entertainment. As mentioned, Saturday evening saw an “emotional” last ever gig from Dan Le Sac and Scroobius Pip. As well as pumping out the tunes the crowd had gathered to hear they spoke fondly of their first ever Bestival where they “weren’t even allowed on the actual stage” and had a “tiny DJ type booth instead”. Slipping out of the Big Top and over to the Main Stage Candi Staton seemed to be happy to provide the crowd with a covers medley. Having just finished an Elvis cover she screamed “Are you ready to party!?” before launching into yet another Elvis cover. Her extended version of “Young Hearts Run Free” got even most of the back of the hill up for a dance and set closer “You Got The Love” raised the last of the stragglers to their feet. “I love you from the depth of my heart, I LOVE YOU TONIGHT” she declared before leaving the stage. Kate Tempest played to a busy Invaders of the Future tent and it’s easy to see where the buzz surrounding her is coming from as she worked the crowd with ease.

Congopunq wasn’t a name I’d heard before but they were definitely a random highlight. A duo, one a performance artist of sorts, the other charged with playing all the music on a series of unusual drums (including a water cooler bottle) and electronics. The performance art was pretty unhinged at times. Throwing what can only be described as a string of plastic-water-sausages over the crowd and building a sphere with sticky tape and tube, shrink-wrapping it before swinging it from the lighting rig – precariously at that. The music was like global dance music where anything went and the multitude of instruments being played along with live vocals was staggering. SBTRKT in the Big Top drew a huge crowd, to the point it was hard to even get in the tent. Even trying to get a look from outside the very back or sides proved difficult as swarms of people coming towards as well as going away met in mass confusion. What I could hear sounded good but I didn’t stick around for the full set. Hoping to catch Factory Floor I was disappointed to find out on reaching the Invaders of the Future stage that they had cancelled. 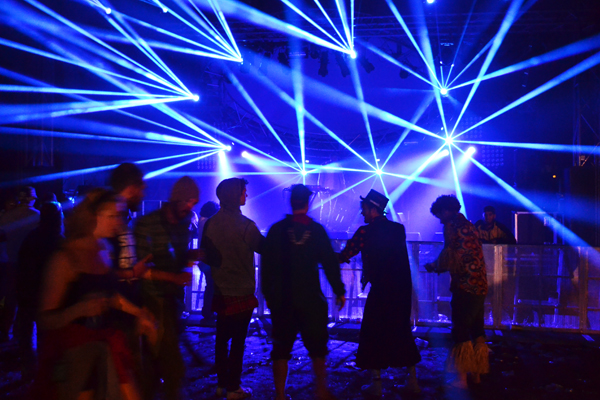 Instead of making our way back to the main arena we opted to stick around and catch Pional. An outstanding set of electronic music followed unfortunately to a relatively small, although appreciative, audience. Playing all the instruments himself as well as drum machines and providing excellent live vocals his set was a quality example of how a live electro set should be done. Heading down to The Port (a stage onboard an enormous ship on land) was mobbed, and seemed to be all weekend, Green Velvet finished his set and handed over to Annie Mac.

Sunday saw Mr B The Gentleman Rhymer lending his quirky take on things in The Invaders of the Future Stage with songs played on ukulele and some comedy lines. Public Service Broadcasting rocked the Big Top with their pastiche of soundbites set to guitars and banjos and whilst addressing the audience only via a very British sounding computer voice told of the various costumes he’d worn at previous Bestivals. The Main Stage found DJ Yoda stepping in to replace cancelled rapper Busta Rhymes and as always he provided a seamless mix of party tunes and incredible scratching that only he could pull off. Major Lazer seemed to have more gimmicks than anything else. Scantily clad female dancers twerking, mass crowd t-shirt swinging, inflatable hamster ball to crowd-surf, confetti canon, a crowd tornado… they pulled out all the clichés but it didn’t detract from the fact that it was essentially someone playing CDs while others danced around and shouted on stage. The hardcore masses down the front lapped it up but for me it was a bland show.

In stark contrast Nicky Siano warmed up the crowd for what I can safely say is the greatest show I have ever witnessed – Chic and Nile Rodgers closing Bestival 2014. Given that Rodgers broke down on stage early in the set while telling the crowd his guitar tech of near twenty-years Terry Brauer had passed away not long before the show, an incredible level of showmanship ensured that they still made sure everyone got what they came for – a spectacle. Bestival is famed for going all out and this set was a frankly scandalous example of that. As they tore through the hits that Nile had written/ produced for others as well as their own hits the crowd got more and more excited. The biggest disco ball in the world had already been raised and now Chic were providing the soundtrack by playing some of the greatest party songs ever written. The set closed with ‘Good Times’ and a stage filled with fans followed by an incredible fireworks display rang out across the site and more than likely the Isle of Wight.

Bestival is a wild, non-stop party and you’d be hard pressed to keep up for the duration, but with so many different areas, so much effort put into site decoration and the all out entertainment surrounding the music they do an awesome job of creating a real vibe that many festivals of this size struggle to achieve. 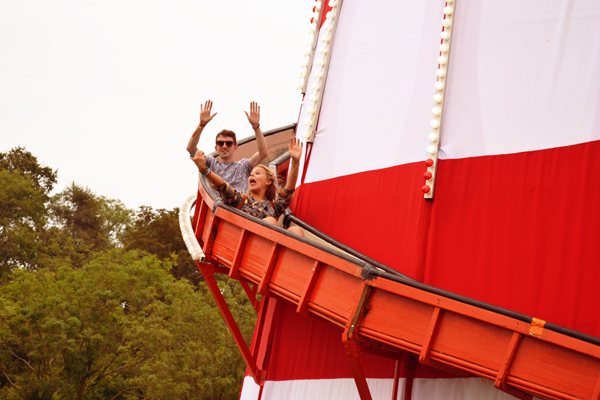 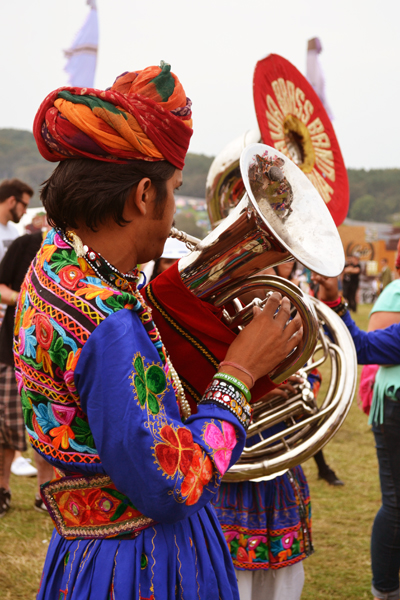 Photos by Eve Bulloch other than where credited.