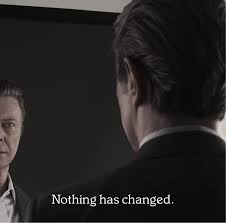 At the start of 2013, David Bowie announced on, his 66th birthday, that he would shortly be releasing his first album in ten years, The Next Day. And he did. It was a terrific ‘comeback’ – not least because it was assumed that he had, finally, retired, albeit quietly. There have been rumours ever since that there would be another studio album. Whether this materialises or not remains to be seen, but in the meantime he has announced another greatest hits-style compilation, Nothing Has Changed, which runs in reverse chronological order and goes back beyond ‘Space Oddity’ to 1964′s ‘Liza Jane.’

The tracklisting can be found here. The irony in the title is implicit: so much has changed in the last fifty years and Bowie has reinvented himself, mostly successfully, in that time more than even Madonna.

There’s one new track ‘Sue (or In A Season Of Crime).’ It’s a collaboration with New York’s Maria Schneider Orchestra, and it sees Bowie go jazz. Not, thankfully, in a hideous Michael Buble/Jamie Callum style way, but instead, this is jazz that evokes the music at its most unsettling, late night, film-noir. Think Bernard Herrmann’s score for Taxi Driver and you’re getting close.

In a funny way, it’s as unsettling and dramatic as the second side of Low. Like much of that album, it’s unlikely ever (I hope) to be sung at karaoke. But it is one of the most startling pieces of music you will hear this year. And it’s not out until November 17, so you will have to make do with radio rips for now. It shouldn’t stop you being able to marvel at it.

1 thought on “The return of David Bowie”