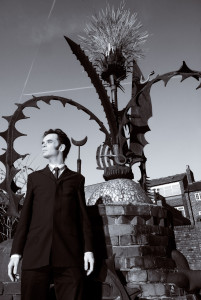 Photo credit Chris Saunders To celebrate Halloween today, Thomas Truax gives us a run down of his 12 favourite Spooky songs! ‘When I was a kid I used to stay up, or sneak up, late and watch old horror films. This to me was the best thing possible in the world. On occasions when there was, say, an old Roger Corman or Hammer horror film scheduled to come on television at 3 a.m. and my parents decided that was too late, I would secretly still wake up and turn it on (with the volume very low of course). This just increased the wonderful sensation that I was getting up to something deviant and exploring something forbidden. I decided in those wee hours that the best possible goal I could set out for in life would be to try to become a horror film star like Boris Karloff, Bela Lugosi, Vincent Price, Christopher Lee, Peter Cushing. It seemed a fail-safe goal because – unlike with things like rock n’ roll – the older you got, the more cool you became. But maybe I got it all wrong. The world has changed. They don’t make those kind of horror films anymore, and Christopher Lee is now recording with a metal band at 92 (which, actually, is pretty cool when you think about it).’ Anyway…

12 Spooky Songs to get you into the mood for Halloween:

The Ventures – The Bat (from Ventures In Space) Spooky sirens, a sense of menace, impossibly groovy. Too short, but there’s an album’s worth of these gems.

The Moontrekkers – Night of the Vampire (produced by Joe Meek) Aw Joe Meek. Obsessed with the paranormal, eventually suicidal and homicidal. Reputedly not a very nice guy, but a genius in a home studio LONG before home studios were anything but a complete oddity. He supposedly turned down Bowie and the Beatles who both wanted to work with him, instead introducing us to peculiar talents like Screaming Lord Sutch and the Moontrekkers. And we’re probably better off for it.

Rube Bloom & His Bayou Boys – Mysterious Mose “He plays on every instrument but there’s just one tune he knows…” My friends and fellow animators of Screen Novelties in Hollywood made possibly about the best puppet movie EVER, based on this late 20’s track: What’s not to love?

Screamin’ Jay Hawkins – I Put A Spell On You I guess I am lucky to be able to say I saw Screamin’ Jay play live. But to be honest it was a little disappointing. Very late in his career, on a bright sunny afternoon in at Central Park Summerstage, his band seemed too much like bored hirelings just going through the motions. He did have Henry, his plastic skull on a stick, but he didn’t rise out of a coffin at the start, which I found disappointing. (To be fair, it probably wasn’t a very appropriate weather for lying in a coffin in central park). It should’ve been more like this:

Thomas Truax – Everything’s Gone Halloween Cheeky of me I know, but we were on the subject anyway weren’t we? I’m proud of this one and certainly can’t be argued that it wouldn’t fit in with the vibe.

Siouxsie and the Banshees – Halloween The album Juju with John McGeoch on guitar was the Banshees at their sharp and jagged best. There’s a lot of tension in here. It feels a little like maybe, against Grandma’s advice, you ate too much candy out of the bag while trick-or-treating, and now you’re off your head from a sugar rush.https://www.youtube.com/watch?v=fZb5I5MO8bQ&feature=youtu.be&list=RDfZb5I5MO8bQ

The Damned – The Dog I’m pretty certain this song is about the Anne Rice ‘Interview with the Vampire’ child vampire character Claudia, but I love that it doesn’t wear that on it’s sleeve. If you’re unfamiliar with the story there’s no way you’d know it wasn’t just about another girl, which makes it extra mysterious. A lot of people disapproved of the Damned as if they were selling out when they got more into their, er… more goth-ish period. But I think Dave Vanian was in full Dracula regalia since pretty much day one, so it wasn’t like they were reinventing themselves. It’s just that Sensible went off for a while in his furry rabbit ears to record ‘Happy Talk’ – at the end of the day to me it’s all punk.

Jill Tracy – Evil Night Together Jill makes wonderful haunting records. She once invited me to perform on a bill for a few nights with her and this Thrillpeddlers Grand Guignol show in a place called the Hypnodrome in San Francisco. A century ago French Grand Guignol was the theatrical equivalent to todays splatter films. There was a LOT of blood. So much so, that there were a couple of times I came close to slipping on the floor and breaking my neck while playing the Hornicator.

Cocteau Twins – Treasure (Album) Traditionally I like to carve pumpkins listening to this. It works for that. Some things you simply have to actually do before you fully grasp why it makes perfect sense. Kind of like listening to Liz Frazer’s singing.

Bauhaus – Bela Lugosi’s Dead Who’d have thought a nine-minute first-take live-played recording with a basic Bossa Nova beat, some dub-style echo, some lyrics David J scribbled on address labels, three chords and supposedly the first time Peter Murphy ever sang into a studio mic would end up warming so many blackened hearts and increasing business for so many smoke-machine companies for all these many years? I sure wish John Peel were still around to introduce the world to these things.

Flights of Helios – Succubus Like any succubus worth her salt, she draws you in slowly and seductively, with very pretty shimmering moments but there’s the sense of something pretty scary coming along…and it is. This is brand new – just got released today as I understand – so don’t go saying I’m completely stuck between the 1930’s and 80’s. 😉