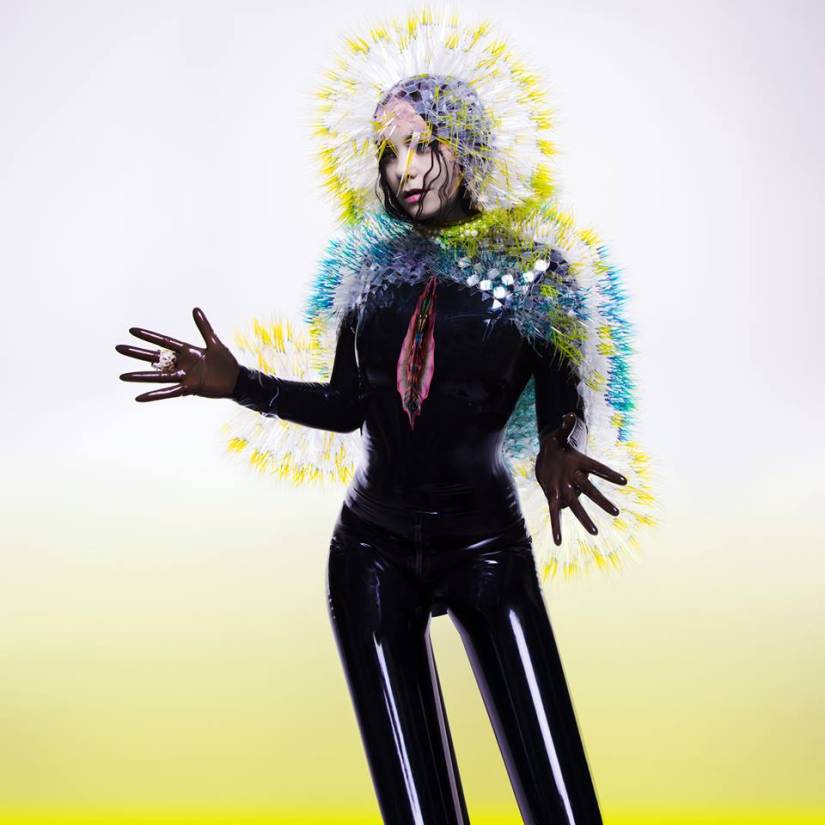 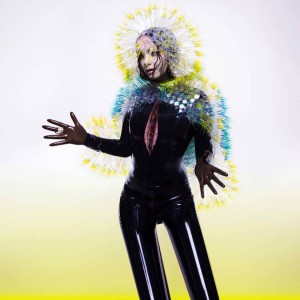 The sheer uniqueness and startling creativity of Bjork‘s work means that any new album from her is liable to be anticipated and then poured over by critics and fans. Having only been confirmed a couple of weeks ago, as you’re doubtless aware by now, the album was leaked and its release brought forward. You’ve probably also read that it’s a break-up album, inspired by her split from her partner of over ten years, American artist Matthew Barney.

The break-up album is hardly a new concept, and one of the most perennial themes in music, Bob Dylan‘s Blood On The Tracks, celebrates its fortieth anniversary this year. But how does Bjork approach such a record? Perhaps it’s stating the obvious to say that a break-up album is going to be nakedly personal in nature: for Bjork that means that the lyrics are upfront, rather than coated in mystery. This begins the album artwork, which sees her with her chest torn open, as if to suggest that a part of her has physically been taken, in tandem with the none-too-subtle observation that this tear resembles a vagina.

Bjork has worn her heart on her sleeve before, most noticeably on 2001’s Vespertine. It’s poignant to go back and play that album now, as we the listener have the benefit of hindsight, that the man she loves so much on that record will break her heart spectacularly. To listen to the refrain of ‘Pagan Poetry’ – ‘I love him, I love him, I love him, I love him’ is poignant enough for us as listeners; it may be (quite understandably) that she may never perform the song live ever again. Vulnicura meanwhile, is a nine song album where she charts the breaking-down of her relationship, how she felt in the aftermath and begins to look to the future

The album opens with the beautiful ‘Stonemilker’ which has been described as being the saddest song she has ever recorded. Perhaps with good reason. ‘Moments of clarity are so rare…I better document this’ she sings. This is the sound of Bjork trying to keep herself grounded and sane than simply as an idea for a song or album. ‘Show me emotional respect’ she pleads. ‘Stonemilker‘ gives us an view into a relationship where one partner is open and the other closed-up, which may be where things started to go wrong for them.

A relationship may be going through a rocky patch and sometimes we can lie to ourselves that it’s going to be okay. ‘Maybe he will come out of this loving me,’ she ponders on the chorus of ‘Lion Song.’ ‘Once it was so simple, one feeling at a time.’ On ‘History of touches’ she awakes in the middle of the night to look at the lover who is pulling away from her. ‘I wake you up in the middle of the night to express my love for you.’ It’s a very female album – and this lyric is almost the other side of the coin of Ian Curtis‘ second verse of ‘love will tear us apart’: ‘why is the bedroom so cold/you turn away on your side.’

The second part of the record is more challenging, as she deals with being left; abandoned, as a partner and as a mother. This is the most intense part of the record, and with the music to go with it. ‘The Black Lake’ clocks in at over ten minutes, ‘Family’ at eight. It may be said that when a relationship ends, particularly where it has been a real partnership, it is a form of grieving. And yet no matter how hurt she may be, it’s dishonest to deny the part that another played in your life, for a time, even if that time is over. ‘If I deny us, I’m denying my soul to grow’ she concedes.

The final third of the record looks forward to the future. After the intensity of the middle third of the record, it’s perhaps says something that the appearance of Antony Hegarty on ‘Atoms Dancing‘ comes as something of a light relief. It’s credited as a featuring performance rather than a duet, which is appropriate ‘I’m dancing towards transformation.’ She may not be out of the woods with how she’s feeling, but she’s starting to sense that there may yet be a life beyond it all. And on the closing ‘quicksand’ she moves from focusing on her own break-up to connect with others who have been through a similar thing. Bjork has spoken of wanting to show others that they are not alone, and for many of us of whatever sex, there is comfort to be had in acknowledging that we are not alone in our most private thoughts and worries,

There’s a fantastic set of collaborations on the record, as well as the afore-mentioned Antony Hegarty, there’s the collaborations with producers Arca and Haxan Cloak. These are definitely good choices for working with Bjork who has a long-established track record of working with other very innovative artists. (I’m thinking of Tricky, Thom Yorke and the Brodsky Quartet just off the top of my head) who combine to produce something very original.

Is it an easy listen? No, it’s not, but then nor is it a particularly difficult one. (Certainly less harrowing than much of Nico‘s work.) Each successive listen, whether focusing on the nakedly personal lyrics or the beautiful if complex music reveals another facet. There have been reviewers who have compared her to the latter-day work of Scott Walker, making music that’s to be admired and respected, rather than enjoyed. I think this is unfair (on both her, and indeed to Walker). I’ve played this record numerous times whilst reviewing it, and not only do I think it’s going to be an album that will be one of the year’s key releases ( in a way like Let England Shake and St. Vincent have done so far this decade), but one we will want to play for a long time to come.