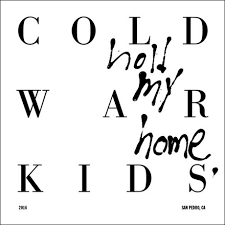 I’m not quite sure why we’re getting this album – Cold War Kids’ fifth – a full five months after its US and Australian release but there’s one thing that hits you immediately. Let’s just say if you’re a fan of 1980’s production, this is going to be right up your street.

Before the rest of you run off screaming though, I ought to point out that this isn’t necessarily a bad thing, especially on ‘Hotel Anywhere’, which sounds like U2 in their late eighties pomp but again, don’t let this put you off, especially if you liked The Triffids or even The Godfathers, both of whom there are shades of here.

There is no shortage of air punching anthems, such as the ‘We are not alone on this road’ section of ‘Drive Desperate’, which starts out alarmingly like eighties (there’s that word again) AOR, but whose glam rock stomp puts paid to that issue immediately. The lyrics, whilst sometimes wilfully obtuse, are generally exemplary. “A trance, the engines of despair, the taste of desert air, the wheels while we turn, they will slowly burn” laments frontman Nathan Willett in a track which effectively mirrors the loneliness of life on the road. I think.

There are some splendid tunes here, but whilst this full on, big sound complements some tracks adequately, there are also some which suffer tragically. ‘Flower Drum Song’ is a shining example. It’s clearly a well crafted, vivid song that urges its protagonist not to put up with domestic abuse, and while it strives to perhaps emulate the raw energy of, say, The Black Keys, its over the top production make it sound like more like INXS or Roachford.

Elsewhere, there are commendable efforts like ‘All This Could be Yours’, an intensely joyous number that belies the frustration of its author with the apathetic attitude of a friend, lover or relative who refuses to help themselves (“But I’ll have sympathy when you get off your seat”). Or the terrific groove of the title track, an apparent homage to Talking Heads, with scintillating buzzsaw guitar that showcases why this band can still be relevant.

And they can. Let’s just hope they don’t immerse themselves TOO heavily in eighties culture. We don’t want the next album produced by Stock, Aitken and Waterman after all…