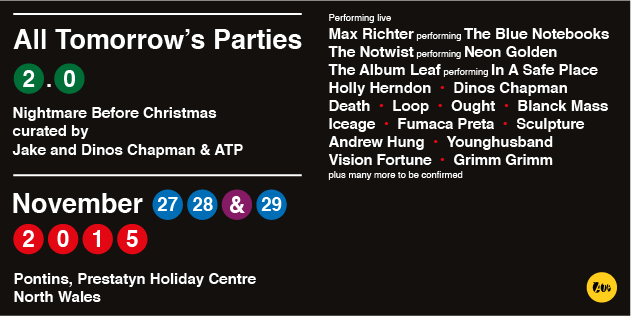 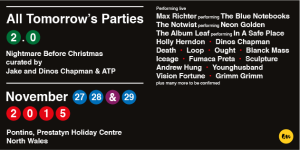 ATP is back. In truth it has never really been away – something that ATP Iceland will clearly affirm – but now some 15 months after ending a long association with its trademark festivals in UK holiday-camps at Minehead and Camber Sands, All Tomorrow’s Parties 2.0 has announced that it will return to the same event format this November in the brand new location of Pontins Holiday Centre at Prestatyn in North Wales.

And a decade after they had curated the very first Nightmare Before Christmas, the British visual artists Jake and Dinos Chapman will once more reprise that role in conjunction with ATP. With many more acts yet to be announced, the glittering line-up so far includes the neo-classical composer Max Richter performing in full his second album, the 2004 release The Blue Notebooks.

In a similar fashion, the German indie-rock band The Notwist will play their fifth studio album Neon Golden in its entirety, and The Album Leaf – the solo musical project of the American electronics wizard Jimmy Lavalle – will perform their 2004 Sub Pop/City Slang release, In A Safe Place.

Other artists who are already scheduled to play on the venue’s two large-capacity stages include Holly Herndon, Loop, Ought, Death and Blanck Mass.

Full details of ATP 2.0 Nightmare Before Christmas can be found here