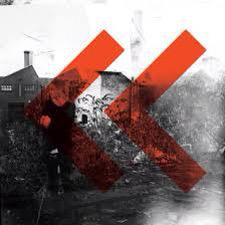 A minimal Linn drum beats insistently, a thudding bass dances alongside a Yamaha keyboard and whooshing samples, all laced with a knowing that taps into a deeper unsettling seam of post-millennial disquiet. This is LoneLady aka Manchester artist Julie Campbell‘s second album ‘Hinterland’ released on the home of experimentalism and electronics, Warp Records. It is immediately at the heart of the dancefloor yet thought provoking and utterly captivating.  Campbell recorded, mixed and produced her new album in her home studio, Concrete Retreat. She then travelled to an industrial region of Michigan to complete the production with Bill Skibbe (Austra, The Kills, The Dead Weather) at Keyclub Recording Co, a treasure trove of classic synths, drum machines and a 70’s Flickinger console that had one previous owner , namely one Sly Stone.

In this environment Campbell has sculpted a post-modern, post-industrial vision that cracks the fault lines between the on-the-edge-of-town fractured sounds of Detroit, Manchester, London and Berlin. Existing at the intersection between funk, post-punk and disco, any fussy production is just stripped away to reveal a pure core; a crafted, sleek collage rustling with the post-punk of Manchester artists of yore like a Certain Radio and New Order, yet drawing the dots between Parliament and Funkadelic.  Scythed by Campbell’s knowing tone that is riven with the attack of Grace Jones and which collides with the cut-ups of Patti Smith, it still sounds like something utterly personal. Campbell’s uniquely oblique lyrics are at times detached, at others hallucinatory, see-sawing between nihilism and hedonism. She is at the heart of the party but uncertain whether she really wants to be there.

Hinterland creates an atmosphere and groove from second one, takes you by the hand and leads you toward your own private disco for the mind. ‘Into The Cave’ sets out the tempo early on; the drum machine snaps and the dexterously funky bass-lines and industrial sample stabs are decorated with Campbell’s Ballardian shots of polemic (“solid things melt in twilight”).

“you can’t stop this bunkerpop”

‘Bunkerpop’ – a song which could almost be the album’s manifesto – creates a place where you can dance like nobody is watching, where putting a record on is to conjure presences. The insistent beat, the percussive twitch, the glitchy buzz-slap punctuated by an almost euphoric encapsulation of the feelings of wanting to be alone yet still wanting to be desired at the very same time. It is the sound of living on the edge of society amongst the abandoned Victorian architecture of Manchester. Campbell calls it “an inescapably cement-coloured North of England psyche.”

“hinterland, that’s where I’ll always be…”

The title track’s wonderfully funky dancefloor shudder is a thrill; it is perhaps the album’s most revealing track documenting as it does Campbell’s subconscious struggle to come to terms with modernity. While the soundtrack is perfectly pitched, strings stab, scalpel like riffs scratch, synths sweep; it is an unstoppable bricolage of Parliament jiving with early Prince in Campbell’s HQ, a semi-derelict building tucked behind a network of shuttered shops and rubble-strewn outskirts at the Manchester-Salford border, all overlooked by the looming watchtower of Strangeways Prison.

“the kaleidoscope I’m inside”

An outstanding highlight ‘Groove It Out’ anchors Hinterland, clocking in at six minutes it bleeds the lines between funk, disco and post-punk marvellously encapsulating the dance floor shudder of the Detroit sound that is implanted with the knowing post-punk rhythms of Gang of Four. It is sewn with the attitude of our heroine, whose vocals survey the dystopia amongst the thud of drum machine, litters of playful futurist samples and bassy grooves. What makes this track unique are the spaces that exist between each enticing instrumental loop, allowing LoneLady the platform to excel.

The second half of the record echoes with an evolution of the sound from her more solo driven debut album, 2010’s ‘Nerve Up’  which is more sparse, more brutal and more fractured. The judder and cracked intense post-punk howl of ‘I Can See Landscapes’ exhibits why she has the names of Wire and PiL on her collaboration roll.

With a striking, androgynous, almost boyish arty look, LoneLady is an artist in every sense of the word. She sifts through the debris of musical history to source the shiny trinkets from youtube that she talks about in her songs – “Sharevari at The Scene, the frazzled Loopzilla, John Carpenter’s Assault On Precinct 13 and more…” Subsuming these disparate fragments of sound and remodelling them in her own image, she’s partly aware of the past yet uncovers the present and shifts it towards the future.

LoneLady’s vision of a modern world is haunted by the past and lies decaying at the outer reaches of the urban sprawl. Her view highlights the contradictions of modern living, the need for space yet the need for genuine human contact in a technological driven new millennium culture.  It is also an album brimming with tunes, skeletal, post-punk and artful, yet grooving with the ghost’s of the best disco records. Yet it is more than just another album, because with ‘Hinterland’ Campbell has not just crafted one of the best albums of the year so far, but created one of the most powerful artistic statements of 2015.

LoneLady – Groove It Out from Warp Records on Vimeo.

Hinterland was released on 23rd March 2015 via Warp Records