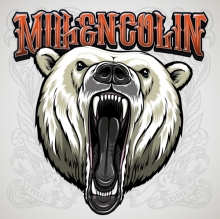 Like many people, my first experience of Millencolin came from ‘Tony Hawks Pro Skater 2’ and still to this day I can’t hear the riff and drum beat of ‘No Cigar’ without being taken back to my childhood and the literally hundreds of hours I put in to the game back in 2000. Now for a game with only 15 songs on its soundtrack, it goes without saying that I became fairly familiar with the tracks included, and whilst its predecessor opened doors to a whole array of alternative music to my prepubescent self a year or two earlier, the uplifting skate-punk of Lagwagon and Millencollin, as well as the angrier, heavier punk of Bad Religion and ‘Swingin’ Utters’ on THPS2 was like lighting a fire in my belly to the extent that I still listen to all four bands regularly fifteen years down the line. Imagine my excitement then that a couple of days after finally seeing Lagwagon live, the new record from Millencollin falls through my letterbox.

Seven years is a long time to wait between records by anyone’s standards, not least for a punk band of Millencolin’s standing, but even after a single listen to True Brew, it starts becoming apparent that time or age haven’t dampened their spirit. If anything, it’s given the band a new lease of life, lighting a similar fire under themselves as they did in me; the record harking back to both their roots and their influences in equal measure. ‘Autopilot Mode’ for instance is nothing but ’90s skate-punk, and smacks of Bad Religion, whilst the eponymous True Brew kicks off a trio of tracks that could easily be taken from any one of the band’s pre-2002 records.

One of the most interesting things about ‘True Brew’ is just how politically charged it feels in comparison to earlier releases; ‘Sense & Sensibility’ deals with the growing problem of right wing political parties and racist nationalism in the band’s native Sweden, whilst the aforementioned ‘True Brew’ deals with old punk crutch of staying true to yourself at all costs. It’s the deft balance of politics and uplifting anthemics that makes True Brew the record it is, whilst those who were worried by Machine 15‘s slightly less “traditionally Millencolin” sound, it will almost certainly quash any doubts. A fantastic return to form from one of the genres most celebrated bands. They say familiarity breeds contempt, but in this case it breeds nothing but reassurance.