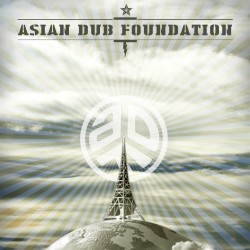 Asian Dub Foundation perform the UK premiere of their live score to George Lucas’ directional debut ‘THX 1138’ at The Barbican, Friday 19th June with the new album ‘More Signal More Noise’ out on the 10th July. To celebrate we have the first listen to the track ‘The Signal and The Noise’ below. A raw, live sounding track that see’s the dub foundation shaking the sound system with their incendiary rhyming and melting pot of bhangra beats, hip hop and instrumental crescendos.

“Famed for their electrifying fusion of punk rock, electronic beats, reggae, bhangra, hip-hop and politics, return with a freshly reinvigorated & retooled line-up to release their new album with Adrian Sherwood back at the controls.

‘More Signal More Noise’ showcases a band shot-through with a new found sense of positive energy, militancy and purpose. Recorded in just three days straight to tape by a thoroughly tour drilled band, and mixed in another three, its urgency and pure joyousness shine through on the finished record.

The story of ADF’s rejuvenation begins in 2012 when the band agreed to Secret Cinema’s subversive request to re-stage their live soundtrack to Mathieu Kassovitz’s ‘La Haine’ (originally performed at the Barbican in 2001) at London’s notorious Broadwater Farm Housing Estate – a fitting setting for a film about urban dislocation, given that it was on the spot of one of the UK’s most infamous riots. The white heat of that show acted as a catalyst to cement the line-up that made this record – founding guitarist Steve Savale re-joined by original members Dr Das (Bass) and Rocky Singh (drums), and former vocalist Ghetto Priest returning to the line-up for the first time in a decade. Alongside Aktarv8r and new recruit Nathan ‘Flutebox’ Lee, the band has once again become a force.

“I think we sound more alive here than on our previous records,” says Savale. We’re uniting stuff that are not often united, radical creativity with a raw primitivism, the primitive experimentalism of the best leftfield rock’n’roll, the best dirty, up-front bass music.” – Tune into both the signal and the noise, and prepare to have your mind blown, and your dancefloor torn up.”