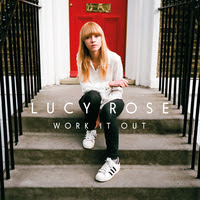 Lucy Rose returns with her second album, the follow-up to the 2012’s Top 20 hit Like I Used To. Far from sounding like the cliched ‘difficult second album’, this set of songs from the sometime Bombay Bicycle Club collaborator is fresh, commercial and contains several tracks which may serve up the much needed breakthrough hit single, not least the second song ‘Our Eyes’ which was streamed back in March as a taster for the album. Producer Rich Cooper (Mumford & Sons, Tom Odell) brings a pleasingly uncluttered sound to the record, but at the same time it does come across like a big, expensive major label release. The songs are allowed space to breathe and there is plenty of light and dark.

Opener ‘For You’ is a classic ‘start quietly / explode into life’ first track which really wouldn’t make sense anywhere other than pole position on the album; ‘Like an Arrow’ bounces along with ‘Radio 2 A-List’ written all over it, (it is being released as a single simultaneously with the album), while ‘Nebraska’ wouldn’t have sounded out of place on Feist’s ‘The Reminder’, which is high praise indeed.

Refreshingly, the songs don’t outstay their welcome, and indeed it is difficult to see why the lovely ‘Fly High (Interlude)’ was restricted to just 1 minute and 24 seconds, as it is a really nice moment which recalls The XX at their height. Having said that, the 14-track album perhaps would work better with a little trimming, penultimate track ‘Into the Wild’ does little to disprove The Go-Between’s Robert Forster’s published theory that the weakest track on an album is always the last but one song, and a couple of songs don’t really bring anything different to the table.

Another standout song is ‘Cover Up’, (already available to download on iTunes ahead of the official album release), which rumbles along quite darkly with the mandatory vintage synth sound, but done really effectively.

The album ends on a high note, ‘Fade Away’ a dramatic Florence-ish finish, albeit with a far more subtle delivery. The space and minimal touches in many of the songs mean that when a song like ‘Fade Away’ comes along, it has all the more impact.

There really is a fine line between mega-selling and cult concern and the fear is perhaps that Lucy Rose is being aimed squarely at a Radio 2 audience, and if the record doesn’t do well, as a result she perhaps wouldn’t have enough perceived ‘cool’ to succeed on an indie. It would be  a shame though, as Rose has ideas in spades, and more importantly, a really good set of very listenable and charming songs.