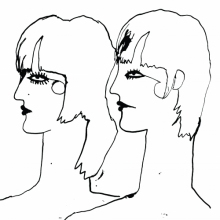 The chaotic clatter at the beginning of the debut album by Drinks is clearly a clever ploy to entice us in, with guitar ‘riffs’ so simplistic that your grandmother can probably play them, and regal sounding vocals that could conceivably have come from an early Pink Floyd LP or ‘S.F. Sorrow‘ era Pretty Things.

‘Focus On The Street‘ continues to mislead us on our merry dance by sounding for all the world like 1980s John Peel favourites The Nightingales, their DIY ethos very much in evidence, slightly discordant and stubbornly confrontational. It would maybe work better, however, as a shorter, two and a half minute scowl than the rather long winded bedroom rehearsal that made it onto the final cut. You can just imagine them standing around shrugging their shoulders at each other in confusion as to how the hell they’re going to finish the song, which just kind of breaks down and runs off with its tail between its legs.

I should have known though, with Tim Presley of White Fence acclaim and Cate Le Bon making up the duo, this was never going to be a nostalgic snapshot of musical history. A piranha infested cesspool where Drinks nibble at the cadavers of fallen idols, perhaps, but never offer up anything as polite as a handshake from this moment on.

The first clue that something is amiss is on the brilliant ‘Cannon Mouth‘, where Le Bon sounds as though she’s sucking moonshine from the kitchen sink through a straw, before Presley joins in on the splendidly infectious chorus. Then all the post-punk posturing is thrown ruthlessly out of the window and we are invited to fill our heads with prog. ‘Spilt The Beans‘, in particular, inflicts the repetitive drone of Le Bon’s ‘Windows in my house‘ refrain in a manner becoming of the voices that the mentally imbalanced form in their heads before carrying out a random, senseless act of violence. Or so I imagine. If this had been released in the sixties, people would be shrieking about the satanic implications and banning Drinks from cocktail parties everywhere. Think Nico, think Marianne Faithfull, and think Marlene Dietrich. Now sit them all down in a dimly lit room with a bong each, and you’ve pretty much got the idea.

By the time we get to the six and a half minute ‘Tim, Do I Like That Dog’, we have been dragged on a hallucinatory trip through hell’s pet shop, kind of creepy and at the same time utterly riveting. At first it seems like they’re just taking the piss, but it’s so unsettling that it’s simply impossible to ignore.

There are lighter moments, granted, but the overall feel is one of uncertain menace, like Mick Jagger in ‘Performance‘. This is never going to find a mainstream audience, but the aura of discomfort which permeates the mood here will ultimately render it one of the most memorable releases of 2015.