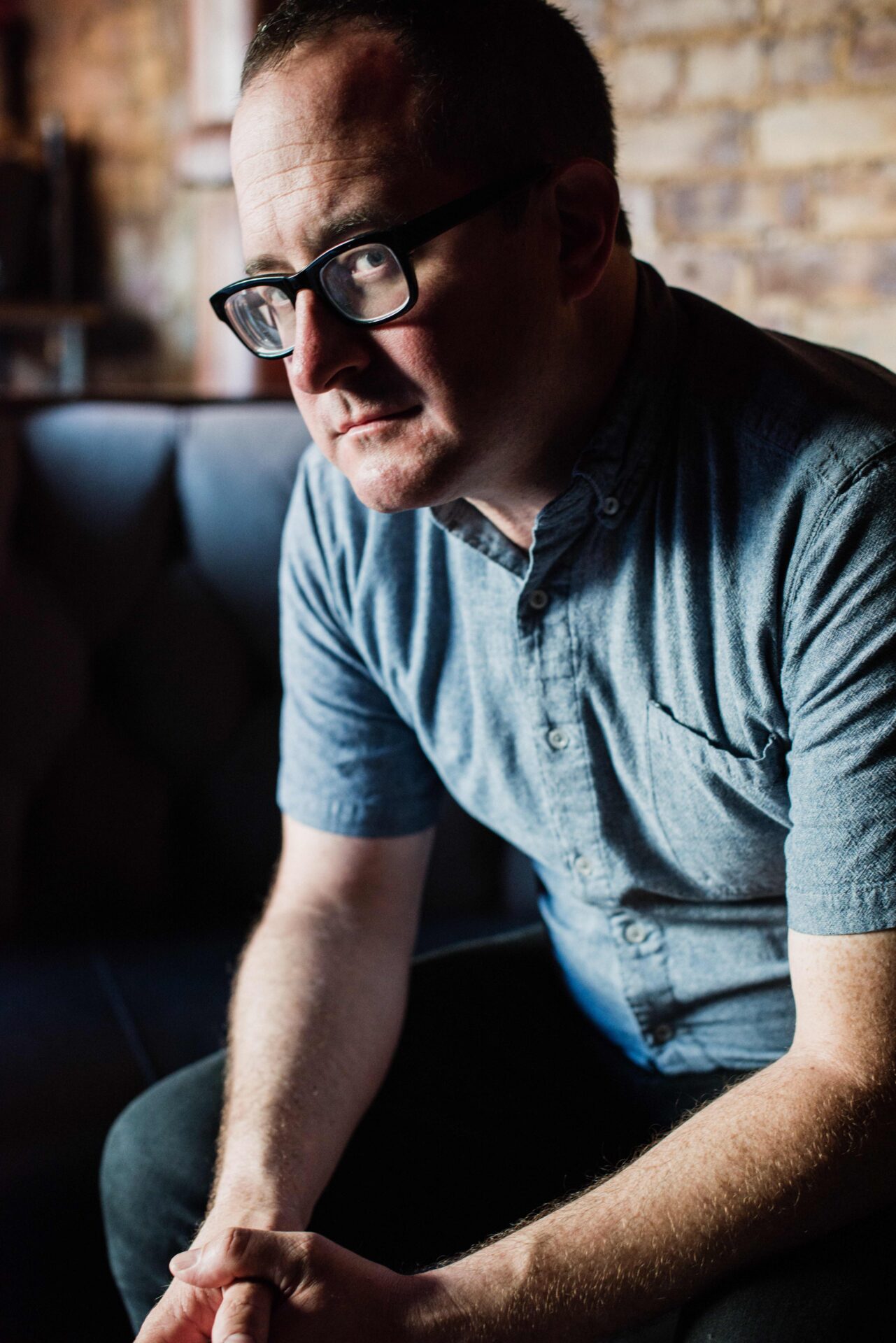 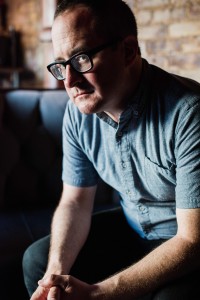 Craig Finn and his band, The Hold Steady, have pretty much soundtracked my life over the past decade, so when I was offered an interview with the great man, the answer was only ever going to be “Yes!”, even though I had just twenty minutes to prepare my questions and a lot of frantic scrabbling ensued. My five year old son, Stefan, bought me a smidgeon more time, as he was vocal in his desire to tell Craig how much he loved the song ‘Going To A Show‘ (“over 100%!”) and the singer gracefully obliged with a short chat – “Always nice to reach out to the younger generation, I think”.
Frivolities out of the way, we got down to the more pressing matters of 9/11, former colleagues, and, of course, his excellent new album, ‘Faith In The Future‘…

I’d have thought that, with a voice as distinctive as yours, it would be difficult to distinguish your solo work from your output with The Hold Steady, yet somehow, it sounds completely different. How?!!

Thanks, I really appreciate that. Can I just say that the UK on the whole has always been a really amazing, hugely supportive country that embraced the kind of storytelling that we do very early on, and I’m so grateful for that. People do ask me all the time how I know which is a Hold Steady song and which ones are solo. I think there are a couple of answers to that. For one, in The Hold Steady, I just write the lyrics. The music is generally Tad (Kubler), but I will have some input – it’s mainly a case of fitting my words around what’s been written. For my solo stuff, I generally write both. Secondly, from the get-go, when I met with Josh Kaufman, we made this decision to do something more ‘age appropriate’ with the new album. Something that, as a 44 year old, seemed natural, and also hopefully more elegant and hopeful.

They’re a lot more laid back, in general, than Hold Steady songs…

Yeah, we also made a decision to work on the mellow songs to let the narratives shine through. You wouldn’t necessarily notice, but there were no drumsticks used at all on ‘Faith In The Future‘; it was all brushes and very few cymbals, which gave it a very different attack and allowed the songs to come through. The stories drove the song, you know? Most of the album was just me and Josh. Just two of us, and sometimes Joe, so the arrangements are pretty sparse and unadorned. And that’s a lot easier than having to say to a band member “OK, you’re not needed on this one”!

Despite the differences, quite a few of the new songs do feel like they are about peripheral characters in the world of Holly, Gideon and co (who feature prominently in much of The Hold Steady’s work)…

I always like writing new characters – in fact I think four of the songs on the new record have people’s names in the title! – because it frees you up from doing something confessional. I read a great quote recently that said “All novelists have just one character…and that is themselves”, and I think that’s true – there’s probably a part of myself that’s in every character I write, but you know, if I was writing purely about myself, all my songs would be just about going to the grocery store or walking to the post box! I feel like I should be writing about bigger things than that and that’s what these characters help me to do.

Well nothing like that has ever happened to me, but that whole premise of someone leaving one relationship to join another, more financially secure one that is a lot more volatile, well, you don’t have to live in New York City for too long before you see it happening to others.

And ‘Sandra From Scranton’…

That one focuses on people who are aging hippies, still caught up in some kind of hipster lifestyle and trying to hang on to their youth by doing the same things that they did in their twenties. There are a lot of those people around, but I have a different way of looking at life these days: My version of growing older is not getting depressed or being in denial about it, but instead it’s “Hey, we’ve survived!”. You know, I’m maybe the top end of the age bracket to do what I’m doing, but I don’t have a big mortgage or car payment that I can’t manage, and I think there’s some honour in that. 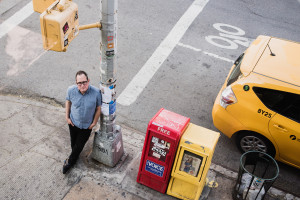 ‘Newmyer’s Roof’ is something of a highlight. I understand that this one IS a true story…

Yeah, and you know what? It’s just like the craziest thing to talk about now. Chris Newmyer was my boss at the time 9/11 happened, and when it did, she was like “Come up to my roof, we’ll be able to see it better from there”. You know, it sounds really terrible and unemotional, and now I look back and think “God! What WAS that?”, but at the time, it was three in the morning and it made perfect sense at that very moment to sit up on the roof watching the towers going down with beers in our hands.
At the same time, unbeknownst to me, my future girlfriend was working in the third tower, but she disobeyed orders to remain in the building and got the hell out. Some years later, we meet, fall in love, move in together and have been happily doing so for many years now. And she’s made my life so much better. In some ways, that’s what ‘Faith In The Future’ is all about – perseverance, whether that is with a relationship, following your own mind or going to work, plugging away and working towards a better future.

If we can move from the future back to the past for a moment, I’ve seen The Hold Steady on a number of occasions, and what has always struck me is that I’ve never seen a band who is more ‘at one’ with its audience. I don’t feel like I’m merely ‘going to a show’; it feels more like we’re all in this together…

That was extremely important to us, and probably THE most important thing that we set out to do from day one. You know, I’ll sometimes look out at the crowd and see two guys with their arms around each other, who I know hadn’t previously met. I’ll think “Wow, we really hit the jackpot tonight”. Above all else, I think the thing I’m most proud of is that we were able to execute that.

When I interviewed your former bandmate, Franz Nicolay, earlier this year, he voiced concerns about your transition from, in his words, “fairly neutral, even amused narrator of people’s bad behaviour to dispenser of paternalistic advice and moralistic judgement”. I think he was referring specifically to ‘Wait A While”. How would you respond to that?

You know what, I think he’s probably right. There was this thing I got into that I sort of regret – throughout history there have always been these kind of ‘advice songs’, you know, Little sister, don’t you do what your big sister done‘ and all that, and they kind of appealed to my sense of humour. I started to think it was funny, and tried to write some of my own. It was meant to be partly tongue in cheek, but I don’t think too many people got the joke. I don’t think it was such a good thing for me to get into, and yeah, I think Franz was being very astute there.

Going back to the new album, ‘Saint Peter Upside Down’ sounds like your ‘Northern Soul’ song…

(Laughs) I always knew I wanted horns on that song, after hearing how well they’d worked with some of The Hold Steady tracks. That one, I don’t know if you know the story, but when Saint Peter – Simon Peter – was crucified, he insisted that he should be upside down when it happened, as he felt that it would somehow be disrespectful to Christ if he was crucified the same way.
It’s also something you see in films, like when the mob gets you – being hung upside down, and I had this sound envisioned – I wanted it to feel like the bad guys were after you, you know, like someone’s in way over their heads – a kind of “Shit, here we go” feel.
And I like that thing of juxtaposing images that are depressing or bleak with an upbeat positivity in the music. So the horns bring this kind of levity, a real fun thing to the song.

We had lengthy discussions about all manner of other things, such as career highlights (singing with Springsteen, of course), his love of using ambiguous double meanings in songs and the lives of those most frequently recurring characters in The Hold Steady’s repertoire, but that last quote, in a nutshell, is what the new record is all about, as Craig himself alluded to earlier – the concept of creating something positive out of a seemingly hopeless situation – ‘Faith In The Future’ indeed.

Faith In The Future’ is released on 11th September on Partisan Records.