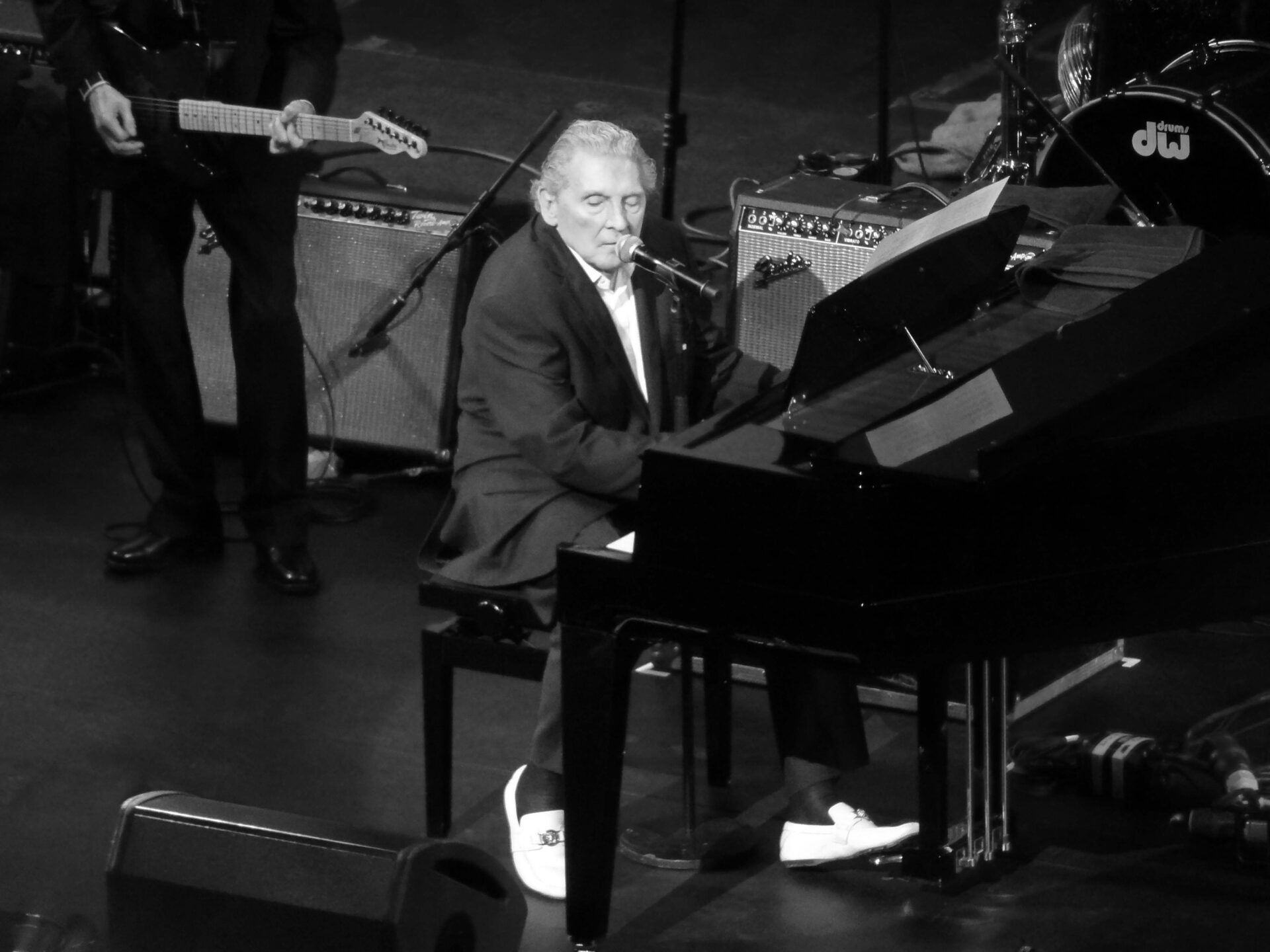 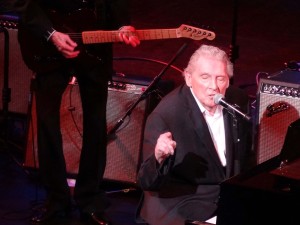 Jerry Lee Lewis is a difficult man to like. Parts of his public persona are defined by stories of gun-toting violence (in 1976 he shot his then bass player, accidentally it would seem, in the chest), hard drinking, drug abuse and seven marriages. The third of these in 1957 to his 13 year old cousin, whilst he was still married to his second wife, may well have then been perfectly acceptable in his Louisiana homelands but brought upon Lewis a wider approbation which led to him being outlawed from most radio stations in the US. Two subsequent wives died in tragic, some have even suggested suspicious circumstances.

There was Jerry Lee Lewis’s upbringing immersed in Pentecostal preaching, religious fervour and racism. There is also his apparently untrammelled arrogance and volatile temperament, flashes of which we see tonight. True to his lifetime sobriquet of Killer, and singing wildly off-key, he murders ‘You Win Again’. But instead of accepting his now inability to make those higher notes he rounds on first his drummer – stopping the Hank Williams classic mid-song to do so – and then immediately afterwards the sound engineer for what were clearly Lewis’s own shortcomings.

But set against his many failings as a human being are tales of Jerry Lee Lewis’s great humour, generosity and charm, a narrative in which he is presented as the most perfect of southern gentlemen. And then there is his irrefutable place in musical history. One of the true pioneers of rock’n’roll music, he is the last surviving member of the Million Dollar Quartet. Along with Elvis Presley, Johnny Cash and Carl Perkins he played an impromptu session at the Sun studios before Christmas in 1956, the recordings of which passed into rock’n’roll legend. Chuck Berry and Little Richard aside, he has outlived them all and tonight he is in London for what will undoubtedly be his last ever performance in the capital.

Now 79 years old, the tour is billed as Jerry Lee Lewis’s 80th Birthday Farewell UK Tour (the only other date is in Glasgow on Thursday). That it takes place in the London Palladium on a Sunday night only adds to its acute sense of nostalgia, a fact that Lewis reinforces by opening with ‘Drinking Wine Spo-Dee-O-Dee’, a song that he had performed at his very first live appearance way back in 1949. 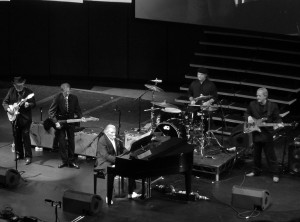 Lovelace, who has been right by Lewis’s side since 1966 – perform a wide selection of rock’n’roll, blues, boogie and country covers taken from right across his incredible recording career. Lewis’s voice may not be the potent force that it once was – he occasionally struggles to reach notes at either end of the register – and age and infirmity have long since kissed goodbye to his hammering the keys of his piano with feet and elbows, but his fingers can still move across those keys with remarkable speed and dexterity.

Lewis relentlessly pounds out the rhythm to Roy Orbison’s ‘Down The Line’, adds a gorgeous rolling score to the melody of ‘Before The Night Is Over’ and underpins the poignancy of ‘Don’t Put No Headstone On My Grave’ with some glorious lines. He concludes Charlie Rich‘s magnificent country staple by asking that they make his own headstone “a gold monument”. You suspect he is not joking with his request. The inclusion of ‘Somewhere Over The Rainbow’ is badly misjudged but ‘Whole Lotta Shakin’ Goin’ On’ – the Big Maybelle tune that first propelled Lewis to international fame in 1957, and which you would not begrudge him just throwing away tonight – is still after all those years a potent exercise in highly-charged sexual abandon. 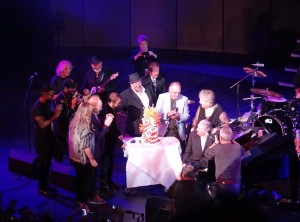 No sooner do the last strains of ‘Great Balls Of Fire’ subside than the evening’s Master of Ceremonies – the wretched Mike Read who at one point seemed more intent on impressing upon the sell-out crowd his past association with the Princess of Wales than honouring the star guest – summons the arrival of a huge birthday cake for the Killer. Twenty three days shy of his actual birthday and wheeled on stage by Robert Plant and Ringo Starr, the spectacle pushes the event towards an almost farcical, end-of-the pier dénouement.

There is no doubting that you would have much rather caught Jerry Lee Lewis at the Star Club in Hamburg in 1964 when, backed by The Nashville Teens, he recorded what is still rightly regarded as one of the greatest live albums of all time, Live at the Star Club. Fifty years ago, Lewis was at his crazed, unrestrained, fire and brimstone best, producing an incendiary performance that embodied everything about the free-spirited reckless freedom of rock’n’roll. Tonight as he hurtles towards his ninth decade on this planet he is clearly, and understandably no longer that same man. But love or leave Jerry Lee Lewis, to be able to say that you have seen him at all still has to go down as something very special indeed.