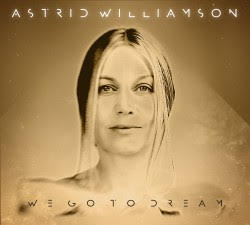 Astrid Williamson first came into public view in her band Goya Dress in the mid-1990s, who were signed to Nude Records just after Suede had hit big with their first two albums on the same label.

Goya Dress split after one album, 1996’s John Cale-produced Rooms, and since then Williamson has been releasing albums under her own name; this is her fifth solo outing and follows 2011’s Pulse.
We Go To Dream begins with its title track and undoubted high point. It was a smart move to choose this track to give away as a freebie ahead of the album’s release, as it whets the appetite with its moody soundscape sitting somewhere between Massive Attack and The Blue Nile, with perhaps a slight sprinkling of The xx. Williamson’s vocals are a nice fit for the instrumentation, which demonstrates her versatility, having sounded equally at home on Goya Dress’s very different and much louder guitar-based songs.
‘Loaded Like A Gun’ starts off like Pulp‘s vocoder-ed version of ‘Common People’ but goes off at a tangent, but maybe strays a little into MOR territory. It is a comment that could be levelled at other tracks on the album, such as ‘Say Goodbye’, which almost sounds like Eurovision-style dance-pop. Not bad by any means, but maybe not the best direction to head for.
If you liked Goldfrapp‘s Tales Of Us, then ‘Vermillion’ may well appeal; it is a gorgeous song that really makes the most of Williamson’s very honest-sounding and appealing vocal, which is restrained and elegant atop the minimal backing. Scattered also showcases this side of Williamson’s character, with just a piano for backing.
‘Home’ is perhaps the most successful of the electronic / dance tracks here as it glides really nicely with tasteful synths and nice backing vocal touches without overdoing anything or trying too hard.
‘Beautiful Muse’ is really unlike anything else on the album, with its almost waltz-like live percussion, (rather than the electronic beats of some of the other tracks), and an extended outro that works really nicely.
‘Saint Saviours’ rounds the album off and is a really nice track, again with minimal piano backing, but this time with luscious backing vocals.
It may have been an idea to build the album around ‘Saint Saviours’, ‘Vermillion’ and the other beat-less tracks, (Williamson is a classically-trained pianist and she really sounds at home on these songs), and maybe put out an EP of the more electronic stuff  as a more cohesive album could have resulted.
Still, Astrid Williamson is a real talent and this album further shows her versatility. I for one am glad that she is still around.
[Rating:3]