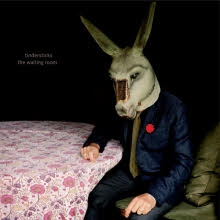 Twenty-two years after their wondrous debut album made them my go-to band for long dark nights of the soul (which, thankfully, are far less frequent now than they were back then), Tindersticks continue to plough their own melancholy furrow, untroubled by the attentions of the general public, the mainstream media and, scandalously, the Mercury judging panel. During that time, their albums have fallen roughly into two categories: the focused, cohesive works of genius that demand being listened to in full (Tindersticks II, career high Simple Pleasure, and 2012’s stunning return to form The Something Rain), and those that sound like a random grab-bag of songs (all the others). The Waiting Room is very much in the latter category and manages to be brilliant and awful at the same time, occasionally even in the same song.

The bad comes in the form of some of the weakest ‘Sticks material for some time. ‘Hey Lucinda’, a duet with the late Lhasa de Sela (who last appeared with the band on 2003’s ‘Sometimes it Hurts’) frequently threatens to turn into something interesting without ever actually doing so; the title track is a forgettable mess; ‘How He Entered’ is another one of those spoken word tracks that often pop up on Tindersticks albums – the tune is pretty, but it’s devoid of the narrative & dark humour of ‘My Sister’ or ‘Ballad of Tindersticks’, or the knob gag payoff of ‘Chocolate’.

The good, though, is very wonderful indeed. The best thing here is, unusually, an instrumental (one of three on the album), ‘Fear of Emptiness’, which sounds like nothing less than OMD‘s ‘Souvenir’ covered by Lee ‘Scratch’ Perry, if you can imagine such a thing. ‘Second Chance Man’ is vintage Tindersticks, a song of new beginnings couched in a lugubrious arrangement that hints that the second chance may not last long. ‘We Are Dreamers’ may also have an optimistic title but it’s dark and menacing, underpinned by a deep Sunn0)))-like drone. And closer ‘Like Only Lovers Can’ harks back to Simple Pleasure, a beautiful soul-tinged ballad about how lovers get tied together for better or worse – “You never know what you’ll find, when you stay too long” – that sums up my relationship with this marvellous band. They may be flawed, and they may release messy albums like The Waiting Room, but they still make me feel like no other band can, and after 22 years, we’re inseparable.