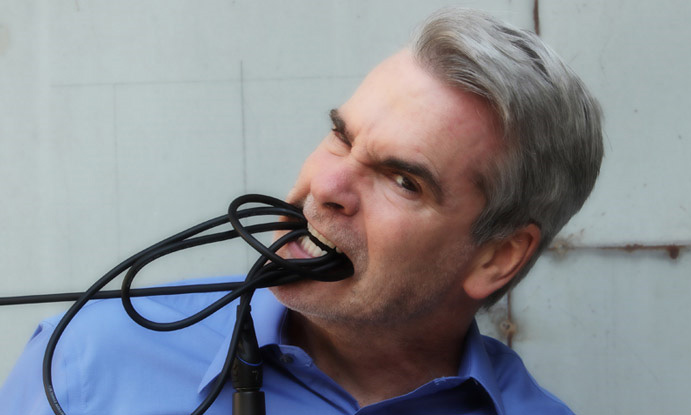 An evening with Henry Rollins is rarely disappointing, Rock n’ Roll’s foremost troubadour and teller of tales has his spoken word package honed to perfection after decades on the road. What began as a side project in between bands has all but eclipsed those bands to be Henry’s main avenue of getting his energy, thoughts and expressions out there. It’s a reliable package; Mr. Rollins will be scarily punctual, wrap the mic cord around his hand several times and proceed to deliver an almost non-stop two and half hours of stories. Some will be about music, some will be about travel, politics, whatever has caught his laser like focus since the last time he was in town. There will be moments of hilarity, poignancy, observations, sadness and joy, but all wrapped in a package that ends up being both inspirational and positive.

Tonight, given the timing, the first section is given over to his memories of David Bowie and Motörhead‘s Lemmy. His recollection of Lemmy as a “genuine bad ass with a heart of gold” are backed up by tales of their encounters over the years. As different as they are, you can tell Rollins had a genuine affection for the Motörhead frontman, and that “if I could get just one laugh out of him when we met, then I was good for another year”.

The tales of Rollins and tinsel town, usually give good mileage. As a bit part actor it’s clearly not as important to him as music, but he likes the challenge; whether it’s low rent fare like the family movie Jack Frost where he played a psychotic ice hockey coach, or the more satisfying roles like his turn as a Neo Nazi in Sons of Anarchy, Rollins’ dalliances with the acting world are fuelled by his desire to push himself into the unknown. As he candidly admits “I’m not qualified for any of this”.

This strain of self deprecation continues through his travel tales, as he tells of face to face encounters with Seal lions while learning to dive for a documentary series, and Baboons in South Sudan. Not content with being a vocalist, producer, writer, and actor Henry it seems is also something of punk rock David Attenborough. His story about listening to the album Raw Power by The Stooges, while sleeping on an Antarctic ice shelf, neatly serves to be both really funny and to tie his worlds of music and exploration together.

The evening is wrapped up with sobering tales of some of his encounters with fans, people who have lost loved ones, or have had hard breaks in life, but have found a unifying strength in his work. Clearly moved by such tales he admits that “I need these gigs more than you do”. It’s a sentiment stripped of any kind of show business attempt to reach out to an audience, which is perhaps why so many of us keep coming back to hear Uncle Hank time after time. We’re checking in on him, as he is on us.