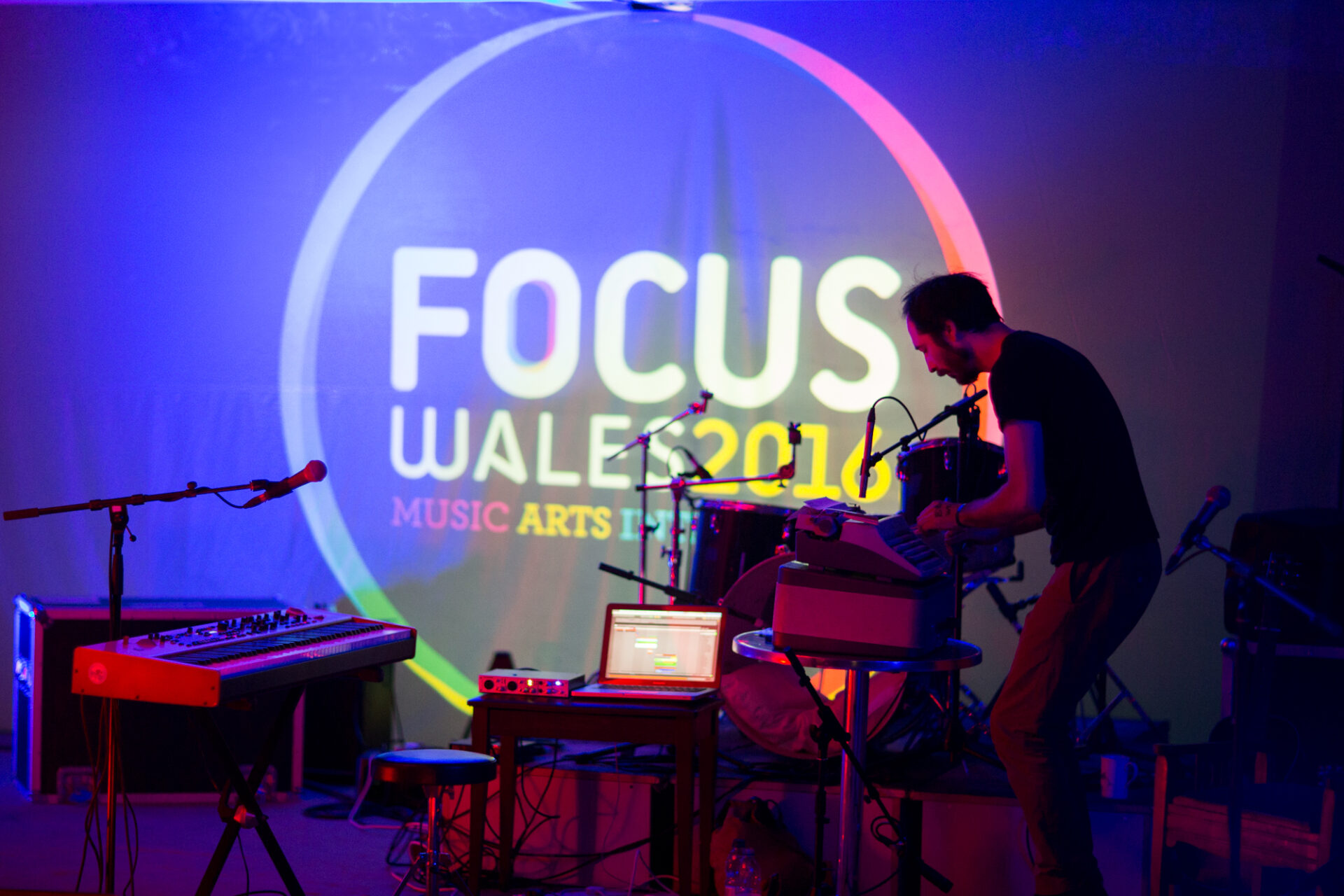 The piercing sound of a car alarm punched through the air the minute I stepped into a hotel bar to meet my FOCUS Wales hosts.  Looking out of the window we quickly ascertained the problem was caused by a gigantic tour bus stuck in the middle of a quiet narrow street.  It’s not your usual sight in Wrexham, a picturesque small town in North Wales.  Then again, most things about FOCUS Wales turned out to be less predictable and more inspiring than I could possibly imagine at the start of my four-day adventure.

For a few days each spring, Wrexham (population 61000) becomes a busy music hub, attracting festival goers and delegates from across the UK and much further afield.  As the name suggests, the festival is an opportunity to showcase some of the best of new music and arts from Wales, with an added bonus of visiting artists from the rest of the UK, North America and continental Europe.

With over 200 bands taking part in this year’s event it would have been impossible to see everything, but what we hunted and gathered made FOCUS Wales our new music discovery destination.  With venues closely clustered together it was easy to explore and see plenty of music in one night.  From the pop rock of Sunshine Underground to the indie pop exuberance of Los Campesinos! top of the bill shows were party time all the way.  Welsh Music Prize 2015 nominees Hippies vs Ghosts‘ packed-out live debut show was a serious contender for a gig of the year.  Bands with years of experience couldn’t have played a tighter, yet more boisterously set!  Another first live show came from The Anchoress, aka songwriter and multi-instrumentalist Catherine Anne Davies, whose recent album Confessions of a Romance Novelist provoked a great deal of positive critical attention.  Poised but slightly nervous, she played to an attentive crowd spinning story lines of her fiercely clever pop.

Despite the prominence of indie, it was possible to find real diversity of sound across the festival.  North Walian experimental multi-instrumentalist Meilir  presented an imaginative and intricate set that employed the use of a typewriter and a gravel tray as well as more familiar string and keyboard musical implements.  Nottingham’s Girl Jaws exploded into the night with a post-rock infused industrial sound ‘n’ light show that wouldn’t have been out of place in a much larger setting.  Within minutes, the tiny upstairs bar room was packed to the gills with people locked in a grip of thumping techno beats.

The mysterious gothic splendour of St Giles Church, one of the Seven Wonders of Wales, provided a perfect and poignant setting for Gwenno’s musical sermon.  Considering that her debut solo album Y Dydd Olaf deals with themes of cultural identity and resistance to corporate homogeny, the songs acquired a new depth; gentle cosmic sound textures floated effortlessly across the vast space of St Giles. Magic!

Playing to a festival crowd is never an easy experience unless your name is Meilyr Jones.  Just a few bars into the first song ‘How to recognise a work of art’ everyone’s attention was fixed on this flamboyant showman.  When the music stopped there was an overwhelming roar of joy, people shouting for more and queuing to chat to this future legend.  In fairness, GIITTV picked him as one of our big hopes for 2016 and he certainly did us proud.  Earlier in the day we couldn’t resist the temptation to speak to our young hero:

Away from festival venues, Wrexham’s entertainment industry seemed to revolve around karaoke bars that were in plentiful supply, open all hours and filled with unique local characters. Another slightly anachronistic surprise came with a realisation that street food revolution is yet to make its mark on this Welsh town.  With many festivals paying more attention to overpriced food and drink line-ups than to music or genuine community feeling, it certainly didn’t feel like a flaw or an oversight.  Who needs a hand-reared organic concept burger with an ironic name when you can have cheesy chips for £1.50?

Apart from persistent sound issues in some venues (not a minor matter!), FOCUS Wales gave us four days of festival bliss that other, more established city events simply fail to deliver. Unlike Leeds or Liverpool, Wrexham is not a big student city with an established network of recognised music venues.  It is not on a major touring route, nor does it have an affluent population eager to spend their cash on live music.  However, it is a place full of character and genuine welcome; a place where people come together to party and enjoy music rather than turn up to update their Instagram and indulge in Michelin-star catering.  Created by a small community of local artists, this festival is born out of passion and commitment; that’s what sets it apart from many more commercial city events springing up all around the UK.

What happens in the future is hard to predict.  As is often the case with successful DIY events, rapid growth can have problematic consequences.  We certainly hope to be back in Wrexham next year to see new Welsh talent and, of course, to join local karaoke troupes.  FOCUS Wales, see you in 2017!