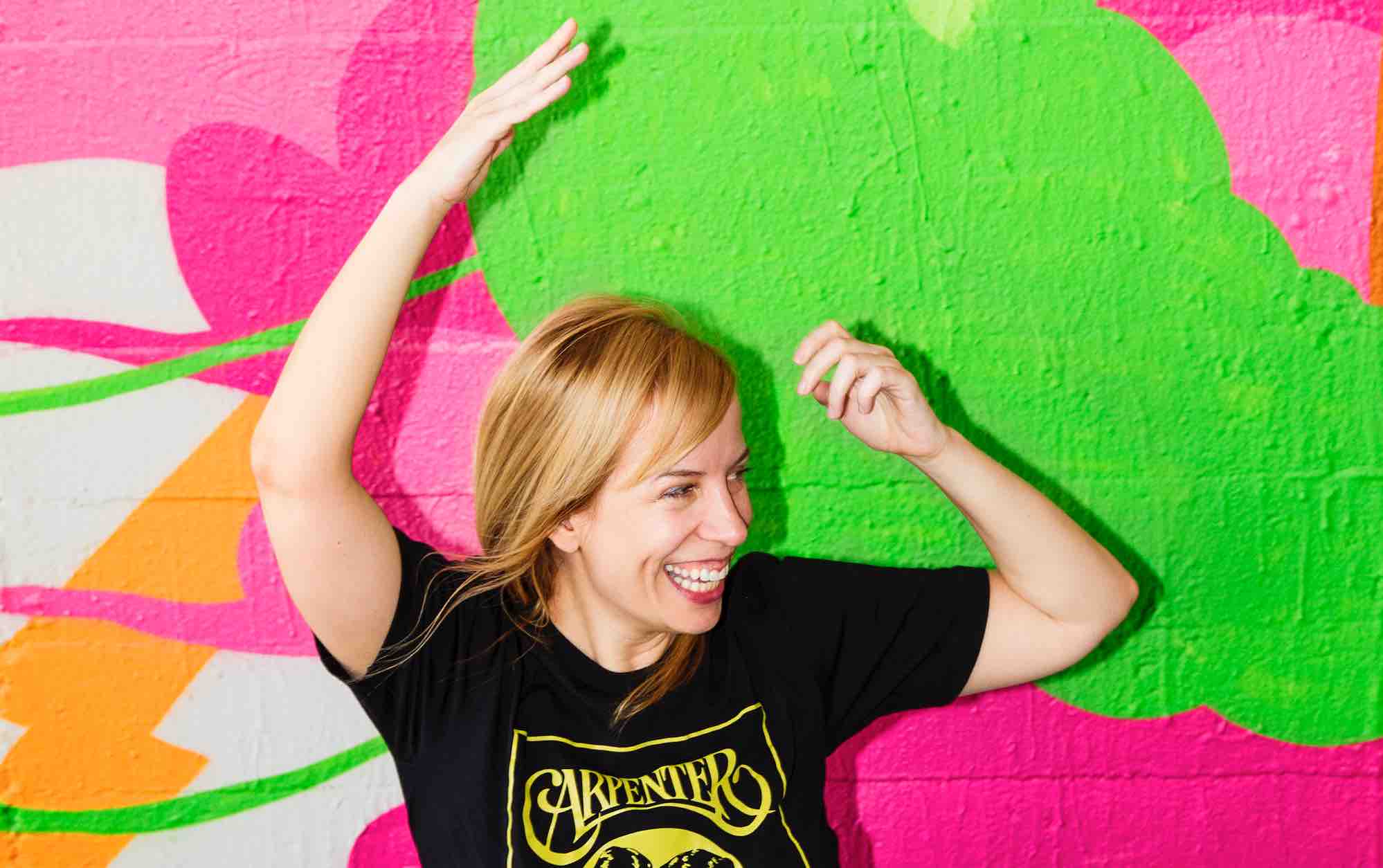 We have the premiere for the forthcoming Hologram Teen twin track release ‘Marsangst’ and its flipside ‘Hex these Rules’ .

Hologram Teen, for the uninitiated among you, is the alter ego of former Stereolab-er Morgane Lhote who on occasion has come to describe her sound as techno krautrock citing motorik pop, 70’s horror, space prog and disco as its keynote drivers.

It’s fair to say that the forthcoming twin track from Hologram Teen through the happy robots imprint, coming in a 300 only pink wax edition, isn’t quite equipped with the immediacy of her debuting Deep Distance offering from the tail end of last year. Yet while you might initially raise an eyebrow to this, there’s no escaping the fact that its cut so insidiously kooky and infectious, that you don’t immediately realise that just while you’ve been put under siege by its fried electro powerhouse motifs, that it’s managed to blind side you taking up residence in your headspace. Into the bargain decorating the gaff in vividly vibrant fluorescent swirly collages that impishly reveal differently with each passing glance. Whereupon its delayed aftershocks only surface in an unguarded moment when you find yourself disturbed by its pinball ricochets pinging furiously within the grey matter.

Ridiculously trippy ‘Marsangst’ is an 80’s adoring Balearic binary bop pill that harvests elements of Moroder, Yello, Tom Tom Club and forgotten rapscallions the Cuban Boys into its thirsty mainframe and shocks them through the club cool grooving of an Arthur Baker terra-forming tumble dryer. Only to drop them into the surreally playful funk fused Dadaist dimpled game world of Nintendo and Game Boy all observed and mind controlled, as were, by the omnipresent hard wired hive mind of a ‘Tour de France’ era Kraftwerk.

Admittedly, our favoured side is the flip where looms ‘Hex these Rules’ which should prove a Festival fanfare for the coming summer season and takes its core ground template from a subtle toning of Ryan Paris’ 80’s hit ‘La Dolce Vita’. As it deliriously mutates across a shape-shifting sound board that courts and chimes to the funk struck hybridisation of Agents aren’t Aeroplanes, classic era ZTT, Air and John Lurie , sumptuously distils said gathering into a subtle psychotropic lunar located floor thumping solar Studio 54 setting with a particularly playful Add N to X furiously scrambling about doing naughty things to the sound decks.

Morgane Lhote (aka Hologram Teen) says of the release:

“My first single “Post-Apocalypteacakes” had a dark, horror movie soundtrack feel to it and I felt like working on a more light-hearted Dance track that still had weirder. quirky elements to it. “Marsangst” started as a really sparse techno track with only drums, bass, some compression, and the keyboard riff sample. As I started developing the musical draft and adding different parts, a more sci-fi futuristic vibe started to appear and the German vocal samples definitely lent a more Krautrock feel to the whole proceedings. I liked the concept of a sort of space exile, with somebody stranded on Mars, and the story unfolding alongside creepy keyboards and slowed down vocals.

As soon as I started working on it, I thought of Adam and Happy Robots Records as I thought it would really fit his vision of robotic, electronic pop. I approached him about releasing the single and thankfully he said yes! We go way back from playing gigs together in London in the 2000s so it’s great to work with an old pal who’s on the same musical wavelength. I first wanted quite a simple, two-colored single cover but Adam reminded me that Hologram Teen is a “colorful” act so I went for something much louder and we both agreed on pink vinyl. Funnily enough, Squeeze”s “Cool for Cats was also first released on pink wax in 1979 so it’s a great musical omen. The B side “Hex These Rules” is about sleazy preachers and ABBA going on a bender with Richard Pryor… I was really influenced by Balearic Dance music for that track and the feel good single releases of the Barcelona-based record label Suara.”