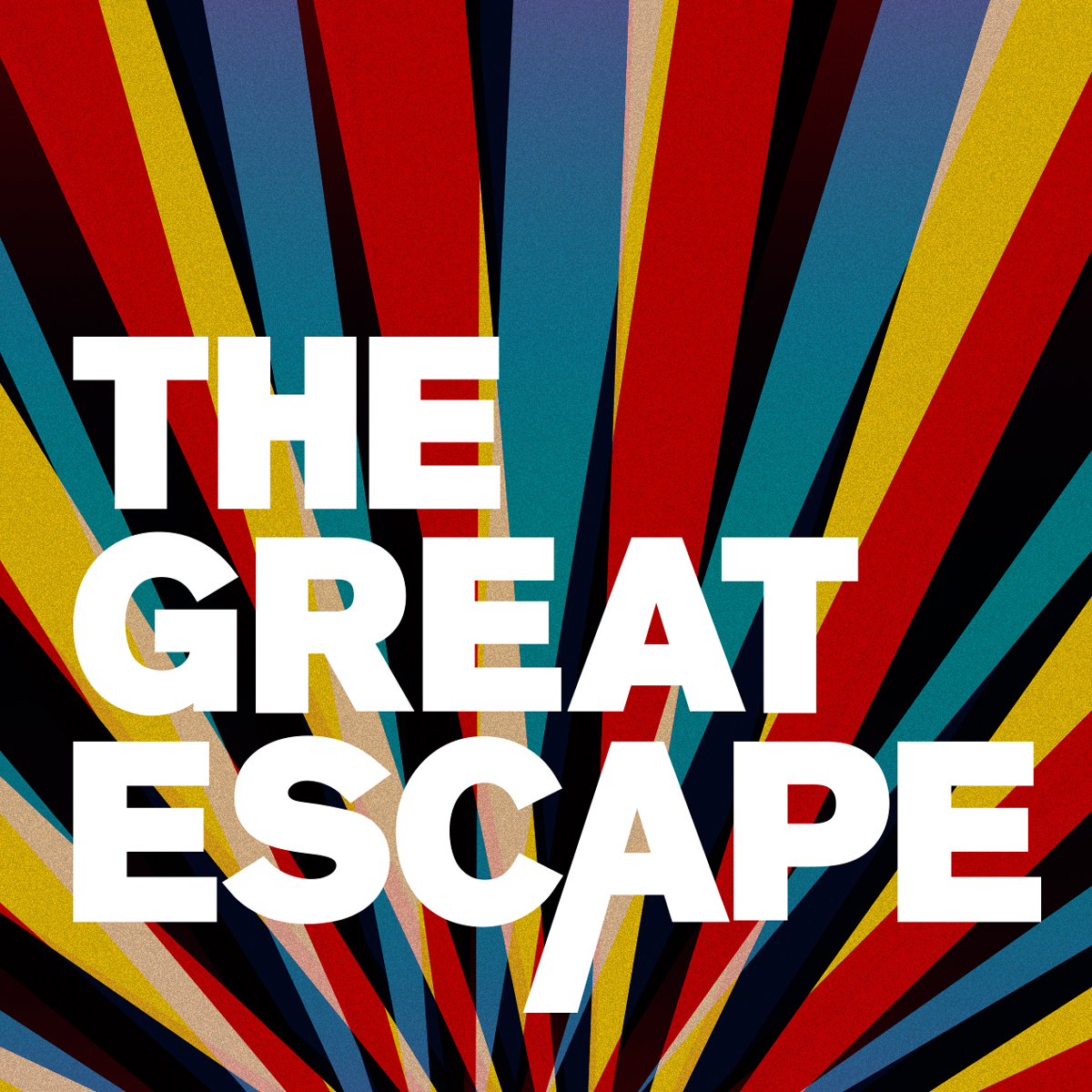 We sent two people to The Great Escape this year, our Features editor Nick Roseblade, and Christian Cottingham.  Here’s what happened.

Nick Roseblade:  Brighton is made for The Great Escape. It’s a no-brainer, in fact, it almost feels like it was written into the town charter.  In 1313, the charter does mention a three-day feast of St. Bartholomew in August, which is basically the same thing.  This year’s TGE, its tenth in total, was bigger than before, with over 300 bands playing in over 35 venues.  The only problem was trying to fit everything that you want to see over the three days!

The star of Thursday was Brodka.  Her brand of psych-pop wasn’t just breathtaking, it was invigorating.  Imagine elements from all of your favourite female musicians and singers, combined into one artist.  Then the musical backdrop is 1960’s Nuggets garage rock, but with massive pop hooks.  Then throw in that the band were all wearing white robes and smocks and you’ll start to understand how and why Brodka is incendiary live.  The only problem was that her 30-minute set felt too short…

Friday’s standout surprise show was from Nadine Carina.  Her blend of Grimes electro dream pop won over the packed crowd.  Then it was all about Ninja Tune artists and UK Hip-Hop. Earth Agency had made The Prince Albert their home and showcased the best in UK Hip-Hop and Grime.  Riz La Teef proved why he is one of the UK’s best DJ with a solid set of bangers, classics, and new cuts before Riko Dan destroyed the stage with some forward-thinking lyrics and flows.  Then it was over to the Komedia for Conner Youngblood.  Youngblood is a singer-songwriter, but by running his acoustic guitar through effects pedals and with vocoder-styled vocals he creates a sound that is warming, but also mechanical.  Just a short walk away, Meilyr Jones‘ take on chamber pop was an extraordinary spectacle that drew a big crowd!  After an agonising walk and queue, I was finally let into The Anchoress.  In the grandiose Paganini Ballroom, she overcame sound issues and showcased why her debut album is being lauded as a future classic.

Saturday was full of dream-pop and electro workouts.  The day started at The Prince Album with the woozy electro dream-pop musings of Kelly Lee Owens.  In 30 minutes she proved why the likes of Dan Avery and Ghostculture are so smitten with her.  After that, I was in the mood for something heavier, so I managed to catch Canada’s Chastity.  Imagine a hardcore Faith No More and you’re on the right tracks.  As the afternoon break was drawing in I hot-footed it to The Green Door Store and caught We Are The City.  Their brand of Progressive Indie-Pop has seen them become cult heroes in their native Canada.  After the break, and a refreshing stroll along the beach, Aldous Harding was next on the list.  Dark haunting folk that dealt lyrically with life, love, redemption, and death.  While I was walking through town to get to the next show, I stumbled upon Nerija.  This London-based group play a hybrid of Afro-Beat and Jazz with attitude and verve.  Next on the list was Stevie Parker.  This was another surprise hit, as her brand of electro-pop was full of warming lyrics but juxtaposed by a stark musicality.  The night was rounded off by Pional downstairs at Patterns.  Their mixing of house and dream pop worked better than it sounded on paper and brought my festival to a glorious close!

A special mention should be given to the Alternative Escape.  What makes it so exciting is that if you can’t get into your desired show, just pop into your nearest pub/bar and see something unknown and incredible instead.  This year’s line-up was packed with bands from Brighton and beyond, including Hunck, Wyldest, FUR, and Egyptian Blue.  Each showed why they are getting attention and with a bit of luck, they should be playing on The Great Escape shows in the not too distant future.

As with all festivals there were some scheduling issues, but given the number of bands playing and the distance between some of the venues, there were always going to be problems.  Next year’s 11th festival is pretty much a done deal, but will they top this year’s line-up and its feeling of collective togetherness?  That’s one answer we all don’t mind waiting to find out!

And, honestly, the programme’s daunting: 72 pages of capsule introductions such as ‘Four-piece alt-rock group based in London named after the god of unrequited love’ and ‘Brighton’s Yonaka are ready to make waves in 2016’ alongside a schedule that looks like the classic ’80s video game Breakout.  At one point we saw a young woman in tears because she couldn’t work out where to go next, and it’s easy to empathise – The Great Escape is legendary for unearthing artists that go stratospheric not long after, with Bon Iver and Adele both having played tiny shows to adoring crowds, and the Fear Of Missing Out can be crippling.

Much better then to ignore the programme (and our editor…) in favour of just rambling through.  Sure, it’s a risky approach when there are this many ersatz Royal Bloods lurking, all overdrive and empty swagger, but it also means you stumble upon Northeast Party House twice.  Sounding like LCD Soundsystem when Daft Punk were playing at their house meshed with extrovert Blur the Australian six-piece weld massive melodies to even bigger rhythms, all insistent drums and driving synths and compelling, mathy riffs – like Bloc Party when they were still good.  Nottingham’s Eyre Llew aren’t bad either, although the only sound louder that their howls of caustic reverb is the mutterings of a crowd debating which Sigur Ros track they’ll reference next, whilst Idles are unrelentingly intense, post-punk snarl and savage wit.  “This song’s about the NHS,” growls frontman Joe Talbot ahead of a torrent of guttural screams and slicing riffs, the chandeliers and grand fittings of the Paganini Ballroom shivering in response.

With tinnitus louder than the passing cars we stagger to St. George’s Church, the pews and candlelight an amniotic lull amid the breakneck clamour of the wider festival.  Australia’s Ry X is gorgeous too, his pared-back folk and yearning falsetto echoing Patrick Watson and Bon Iver, beautiful and intimate and only slightly offset by the cans being cracked open by the bar at the back and the fire alarm that goes off in the encore.

A fire alarm would have been welcome during Chastity Belt’s set, mind, and a heck of a lot more memorable than whatever they were doing onstage.  There’s no forgetting Finland’s Elifantree though: ‘Pablo Picasso, Charlie Chaplin and David Lynch,’ says the blurb, and for once it’s barely hyperbolic.  With saxophone, synths, shrieking Bjork-like vocals and the best drummer of the weekend the trio move from dreamscape to fever sweats within the same bar, enigmatic and unnerving and wonderfully unpredictable.

More straightforward but equally bracing are the Swedish-American FEWS, riding a wave of album hype that sees the line outside the tiny Hope and Ruin receding into mist and a guestlist that ensured that it stayed that way.  A tight bind of Interpol coil and Savages brood their stage presence borders on sociopathic, the volume swelling dangerously during eight-minute closer ‘Ill’ whilst vocalist Frederick Rundqvist rocks back and forth into the light – it’s a thrillingly airless assault.

But best of all are Canada’s Doomsquad, playing to a pitch-black room under blood-red lights, their drums fearsome and portentous like the intersect between an illegal rave and a pagan ritual.  Half-heard vocals loom from the darkness chased by thick layers of bass and horror-movie stabs, chiming guitars and spectacularly incongruous flute, jarring and hypnotic and ruthlessly, terrifyingly kinetic.  It’s exhausting stuff but invigorating with it, much like The Great Escape generally, and as Jagwar Ma close the 2016 edition with their beats compelling our bodies to bouncing even if our feet can’t take it anymore it’s obvious that the runes have come up good this year – the next wave of music looks pretty damned exciting.