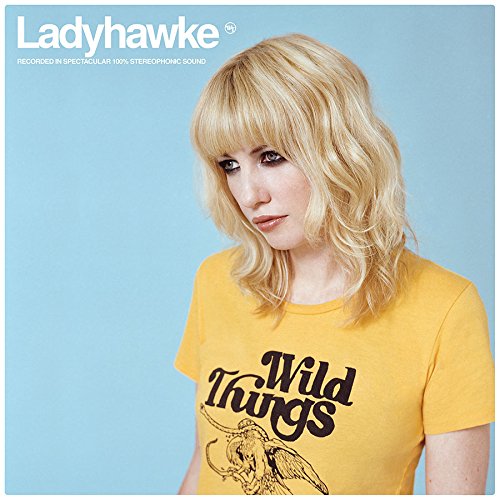 It’s been ten years since the peak of 80’s revivalism, and thirty years since the decade itself, yet it feels like its influence has never really gone away. Ladyhawke’s 2008 debut was lumped in with the electro-pop revivalism of peers such as La Roux and Little Boots, but her rock leanings align more with modern pop stars such as Taylor Swift and Haim, whose take on retro moves feel rich and glossy. Wild Things, the third album from the New Zealand chanteuse, comes three years after the poorly received Anxiety, and while it doesn’t feel like any new ground covered, it’s definitely a career peak that makes perfect sense in the current climate.

That’s not to say Wild Things is a complete re-tread. It does a few things differently; namely, it turns the guitars down, and the synths up. It’s a disco album at its core, not just in the glistening electronic arpeggios that form much of its backbone, but in the way it feels warm and inviting, rich and lush in its textures. Ladyhawke borrows from dance music in the vein of Cut Copy and Fred Falke, using starlit chords and thick basslines, but plays loosely with them in a mix of New Wave and stadium pop. It’s all familiar ingredients, but mixed together well. Exceptionally well.

Every single track on Wild Things comes with a booming chorus, and the album is full of vocal hooks, instant riffs and faultless harmonies. Ladyhawke’s pop instincts feel innate, the kind that ask ‘have I heard this before?’ It’s difficult to pick out highlights on such a well-rounded album, but there’s many great moments: the ‘na-na-na’ hook of ‘The River’; the fuzzy cajole of ‘Money To Burn’; the sepia-toned ‘ooh-wah-ooh’ of ‘Golden Girl’. The effect is immediate: Wild Things is an easy album to enjoy, undemanding in its obvious charms.

It’s an album strong enough to overcome Ladyhawke’s weaknesses as a performer. She’s never been an exceptional vocal talent, her voice functionally bland enough to service previous material.  On Wild Things, that functionality becomes a blankness that serves these songs. The limits of her voice constrain her writing and performance, which means these songs form shapes in familiar outlines. It means Wild Things feels timeless, unattached to pop trends or her own backstory. This is an album that doesn’t want to impress with technical proficiency, but is silently impressive with its effortless mastery of pop.

Even the most fervent 80s nostalgia comes with an acceptance of the decade’s tastelessness. Pat Benatar, Cyndi Lauper, Stevie Nicks – these are all figures who represent the less stylish end of the period, and at her strongest, Ladyhawke would easily rank alongside these icons. Wild Things isn’t a question about taste: it’s a question of timelessness, and on its expert take on pop, it seems strong enough to endure beyond any revivalist trends.