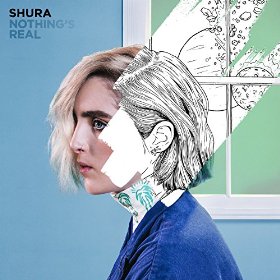 2016 is another year where the imprint of the 80s looms largely over pop music, The 1975, Ladyhawke, Niki & The Dove and Kristin Kontrol have made some of the strongest albums of the year with their take on that aesthetic. Nothing’s Real, the debut album by 25-year-old Manchester-born Shura, is equally indebted to the 80s and puts itself ahead of the competition by a long way. It’s a perfectly curated debut that takes its influences and turns them into something very special.

Nothing’s Real springs into life with the title track, which is the story of a panic attack set to disco. Moroder space synths and an addictive bassline lead to the first of many glorious choruses as Shura sings, “they’re telling me I’m fine, they’re telling me there’s nothing wrong”, backed by classy disco strings. It would fit perfectly on a Disco Discharge compilation next to classics by The Flirts or Laura Branigan. ‘What Happened To Us’ takes its cue from the often-imitated Fleetwood Mac at their poppiest. The chorus has an irresistible sheen that makes the long wait for the second Haim album much more bearable.

Greg Kurstin co-wrote the latest single, ‘What’s It Gonna Be?’ and it has a neon lit chorus that justifies comparisons to early Madonna, not just in style but also in quality. It stands with the best songs that Kurstin produced for Tegan & Sara. Its accompanying John Hughes-style video highlighted just how perfectly she captured her desired sound.

Nothing’s Real isn’t just about big bright pop moments, there’s an introspective side that comes out in the ballads. Shura’s first single ‘Touch’, is over two years old, but hasn’t lost any of its charm. ‘Touch’ has a similar mellow R&B atmosphere that sounds like the brilliant Jessie Ware. The sleek groove of ‘2Shy’ has flourishes of delicate Sade-like synths and subtle percussion — it’s a beautiful combination. These songs encapsulate a retro feel but Shura’s instincts keeps things contemporary.

Shura reflects on a breakup on the stunning, ‘Kidz ‘N’ Stuff’. In an understated hushed tone, she sings, “I never thought that we’d break up, I thought we’d get married and have kids and stuff”. It’s heartbreaking. The way she conveys vulnerability is one of her biggest triumphs as a performer.

Shura has made a pop record, but there’s no sense that she’s playing it safe. Her use of old audio clips of herself and her family give the record a unique edge, as well as a personal touch that helps the listener invest in Shura as a person. She doesn’t stick to the three minute pop rule either. Nothing’s Real ends with the epic, ‘White Light’. The subtle funk of the melody spreads itself over seven minutes, without ever losing focus. The slow build of the New Order-like guitars towards its climax is one of the details that makes Nothing’s Real a satisfying listen.

Nothing’s Real rivals KING’s We Are King as 2016’s most fully-formed debut. The whole record blends together seamlessly with nothing but refined songwriting and outstanding production. This is a brilliant record constructed by someone who sounds like they should be on their fifth record by now. It’s exciting to think this is only the beginning for Shura.