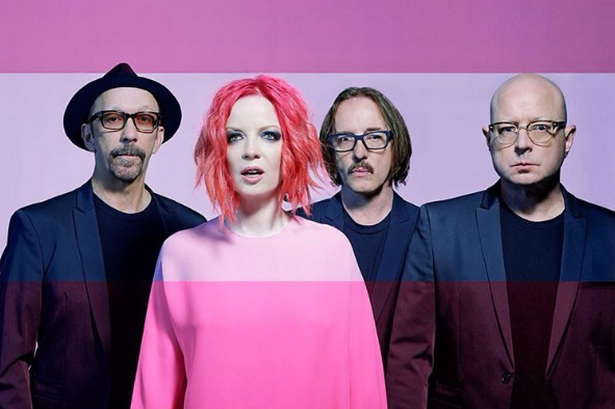 Can a band sound too much like itself? After a hiatus of four years since the release of Not Your Kind Of People in 2012, Garbage return with an album that sounds, well, like Garbage. A mature version compared to earlier efforts, perhaps, but then they are more mature. Ageing happens to the worst of us and this is less stupid girl, more contemplative adult over the whole. That could be the problem with this record if it’s not slightly hyperbolic to describe it thus. It’s not really going to surprise anyone. Maybe it’s not meant to. If you like the band, you’ll like this. That’s the beginning, the middle and the end of it.

In no way is that meant to resolutely undersell the record. Tracks such as ‘If I Lost You‘ which uses a processed version of the beat Madonna nicked from Public Enemy for ‘Justify My Love‘ ooze a sleek and sexy appeal [despite its characteristically introverted lyrics]. Superficially livelier efforts like ‘Blackout‘ and ‘So We Can Stay Alive‘ give a reasonable punch to the solar plexus, but it’s hard to think the record has been in gestation for a long while. Indeed, apparently it was, “less fussed over [than previous records]”, according to Shirley Manson. “Immediacy“, was the appeal in the words of co-member Butch Vig.
Not that Garbage have anything to prove of course. With a career stretching back 21 years to the snarling pop of ‘Only Happy When It Rains‘ via the sophistication of ‘Milk‘ to one of the unlikelier ever Bond themes, ‘The World Is Not Enough‘, it’s been pretty illustrious. The band formed by Vig, Duke Erikson, and Steve Marker – with Manson joining swiftly thereafter – has always managed to tread a very dexterous line between credibility and wide appeal. The goth-like aspects of some of the music and Shirley’s own openness about periodic struggles with mental health and emotion go down well with a certain demographic. The high production values and, yes, pop hooks took things to another level where multi-million sales figures were and are the order of the day. All that artistry and studio acumen is present on Strange Little Birds. Whether it has pretence towards grasping a new, even bigger, fanbase seems moot, though.

That said there are moments that hint at more. Opener ‘Sometimes‘ with its minimal but bulldozing percussion and sonorous strings and piano is irresistible in an understated way. An emotive and downbeat song against something altogether more bruising. Redolent of many of their tracks that description may be but it goes a little further and is certainly effective. Both humane and machine-like at the same time. With a little bit of space and sparseness, as is so often the case, more of a song is revealed and quirks and idiosyncracies highlighted that get lost in more compressed numbers. Quite beautiful.

That feeling of dislocation extends further across tracks like ‘Night Drive Loneliness‘. An angst that, unlike other tracks, never gives into the overt and overly demonstrative. That sense of a band in full control is welcome though that possibly risks the caveats noted. Immediacy may be the claim but it’s polished and perhaps that circle of inspiration yet control is the thing most bands kill themselves to square. Parts of this record manage it, parts do not.

Will not disappoint the fans one bit. For the more circumspect, there are three or four killer tracks and the rest is good but no more. A third of a genuinely brilliant record, two-thirds simply decent.