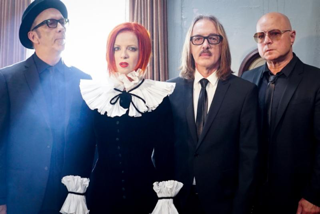 Garbage have revealed a brand new, politically charged music video for their current single, ‘No Horses’ watch it below. Released last month, the track is in aid of the International Committee of the Red Cross with all of the band’s profits from sales and streams being donated through to the end of 2018. The track is available HERE.


“It’s been my observation that when governments disregard their citizens for their own greed, the ensuing soundtrack usually kick’s ass. Like Nina Simone’s ‘Mississippi Goddam’ or the Clash’s ‘Straight To Hell’, ‘No Horses’ made me realise that I’m not going insane, these really are fucked up times. The lyrics are powerful so the challenge was to add something visually that wouldn’t ruin the individual’s interpretation,”

Garbage kicked off their co-headline ‘Rage & Rapture Tour’ with Blondie on July 5th in Saratoga, CA and will be touring the U.S. for the duration of the summer. Both bands along with an opening slot from Sky Ferreira played to a crowd of 17,000 fans last month, selling out LA’s Hollywood Bowl. Support for additional Rage & Rapture tour dates will be provided by John Doe & Exene Cervenka followed by Deap Vally. A complete list of upcoming live dates and ticket information can be found HERE.