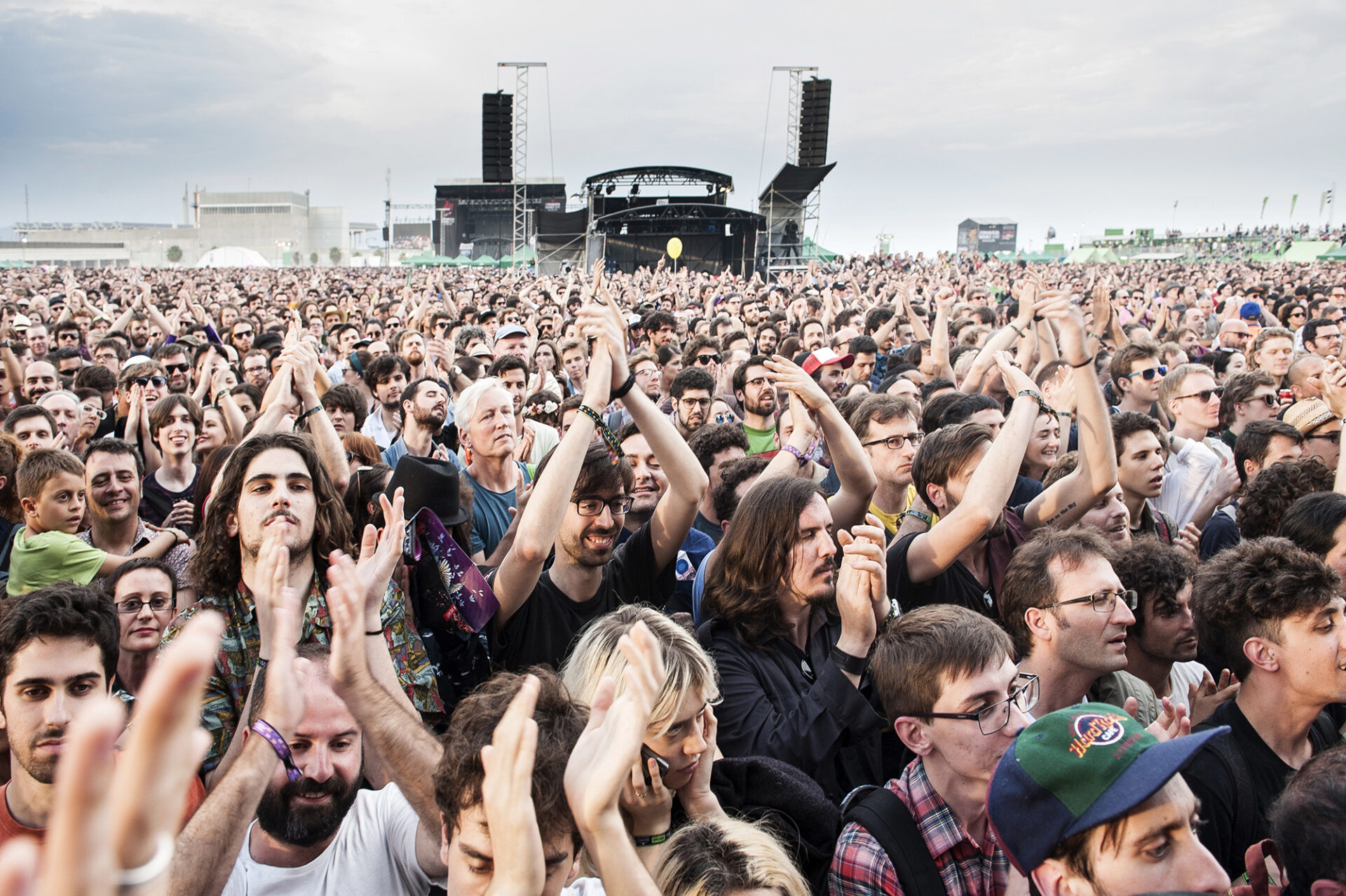 There is no doubt that Primavera Sound benefits significantly from its location. Frankly, Barcelona has everything – great weather, beautiful sights, incredible food and drink. Seven hells, it even has a beach. But what makes Primavera Sound one of the greatest festivals in Europe is that it not only manages to attract a marvellous and disparate bill to the Parc del Forum on the south east coast of Barcelona (arguably the finest bill in Europe this year) but that it seems to coax out flawless performances from everybody who performs there. And this year, the bar for what was already great was raised that extra notch during a quite magnificent weekend of music that touched the soul, stirred the emotions and wringed every ounce of energy from our dancing feet. Here are some of our highlights from the weekend…

Suede – Wednesday 1st June: Primavera Stage
And then it’s time for Suede, who continue their incredible Indian Summer in the most glorious way. The introductory salvo of tracks is completely ludicrous: ‘Introducing the Band’, ‘Outsiders’, ‘Killing of a Flashboy’, ‘Trash’, ‘Filmstar’, ‘Animal Nitrate’, ‘We are the Pigs’. It’s an extraordinary reminder of what an astonishing repertoire of songs they have and the band play them like it’s the first time – Brett still lean and prowling; Codling, Osman and Gilbert in total synchrony and Richard Oaks playing as well as I’ve ever heard. It’s generally a greatest hits set tonight, though ‘Sometimes I Feel I’ll Float Away’ from 2013’s excellent Bloodsports still thrills and the aforementioned ‘Outsiders’ is superb, though unfortunately neither can touch the quite astounding acoustic version of ‘Still Life’, which carries incredible pathos and emotion through the night sky. And although many of the crowd take time to get into it, by the time they close the main set with ‘Beautiful Ones’ and then the final ‘New Generation’, everyone is bouncing around. Absolute national treasures and long may they continue.

LCD Soundsystem – Thursday 2nd June: Heineken Stage
So LCD Soundsystem. Back. A gig we never thought we would see, but then here we are at the Heineken Stage. It’s just past 1am and we’re waiting in stunned anticipation. And then James Murphy comes onto the stage and the crowd going ballistic. For a man who should be used to this acclaim by now, he seems genuinely stunned by the reception; almost as if he never expected it. But then as soon as they start into ‘Us vs Them’, you remember what a thrilling, inventive band they really are. And then when they follow it with ‘Daft Punk is Playing at My House’ the war is won before it has even started.

What follows is one of the most glorious and life-affirming sets I’ve ever had the privilege to see. The atmosphere in the crowd is one of communal joy and love for this unique band. And the music is simply incredible. ‘Tribulations’ pulsates through the night sky, ‘Losing My Edge’ is sung-spoke along to by everyone and a superb ‘Dance Yrself Clean’ is greeted with mayhem in the audience. And the band are superb – a full percussion section complementing the beats, Murphy animated and screaming. And then we come to the finale – an utterly spellbinding ‘All My Friends’ reverberating through the audience connecting friend with friend and new friend with new friend. It is one of the most astonishing moments of communal joy I’ve ever experienced at a gig and one I genuinely never thought I’d see again. And as the last throbs of sound leak from the speakers and we all file away, one word is on the lips of everyone around – “Wow”. That pretty much sums it up – wow.

Radiohead – Friday 3rd June: Heineken Stage
The crowd and the crush for Radiohead is initially overwhelming and difficult to deal with. I know it’s a band people love but forcing your way through an already packed section is unacceptable and totally against the Primavera Sound spirit. But what happens once Radiohead come on is incredible. Everyone stops still, makes space and begins to dance to the opening ‘Burn the Witch’. And then something even more incredible happens when they play ‘Daydreaming’ – everyone goes utterly silent. Literally no-one makes a sound around us. It is astonishing. And the band are stupendously on form during it, teasing out the delicate, crumbling intimacy of the song with utter mastery. The opening section is basically playing A Moon Shaped Pool in order. The bass to ‘Decks Dark’ dances with the piano part, the picked guitar of ‘Desert Island Disc’ filters through the night and then the trembling, stuttering, shifting juggernaut of ‘Ful Stop’ lifts things up onto another level entirely. It is thrilling, progressive, visceral music. And then Jonny Greenwood tunes into Spanish radio, a series of cracked phrases tumble out across the audience and all of a sudden the colossal bassline for ‘The National Anthem’ powers through the crowd like a nuclear blast. And it is at that point I realise I am watching one of the best gigs of my life.

This is a greatest hits set. But it is a greatest hits set by one of the greatest bands of all time. And they pick the songs without any pretention or motivation – simply because they are great. I had wondered whether Radiohead might choose to go obscure and do a The King of Limbs-heavy set. But no, we genuinely get the hits. ‘Talk Show Host’, ‘Pyramid Song’. A breathtakingly beautiful and delicate ‘No Surprises’. ‘Karma Police’ evokes a singalong that extends halfway to Las Ramblas and back, and doesn’t cease until three minutes after the end of the song. It’s almost as if the whole crowd realise they’re seeing something special and the band take that energy and give it back in spades. As aloof as they can seem, as a live band Radiohead thrive off the efforts and appreciation of the crowd and the one-two knockout of ‘Idioteque’ and ‘Bodysnatchers’ has everyone breathless and ragged, only to be immediately soothed by ‘Street Spirit (Fade Out)’. It is absolutely extraordinary.

The encore is the victory lap. ‘Bloom’ sounds magnificent once freed from the quizzical shackles of The King of Limbs, ‘Paranoid Android’ is a flash of force, creativity and a series of magnificent compositional considerations that still sounds unique nearly 20 years on. ‘Nude’ provides a moment of beautiful respite before a thundering ‘2+2=5’ and an explosively funky ‘There There’ finishes things off in style.

Or does it? That’s all that’s written on the setlist. But here the band are back on stage, guitars in hand. There’s a strummed G-Chord; it sounds somewhat familiar. It can’t be? Surely. Phil clicks in and… OH MY F**KING LORD, THEY’RE PLAYING ‘CREEP’. Literal pandemonium ensues amongst my part of the crowd. People are screaming with joy, clambering onto each other’s shoulders, bellowing the words into the night air. It is the most unexpected, off-the-scale and magnificent moment possible – even though Radiohead have gone on to release so many better tracks over the years – far better – that initial breakthrough still carries a certain mystique. And they do it perfect justice – Thom’s voice carrying beautifully through the air, Jonny’s guitar crunch sending shockwaves, the final section seeing tears, hugs and a sense that we have just witnessed something quite extraordinary. I have seen Radiohead be great before – Oxford in 2001, Manchester Apollo in 2005, Leeds Festival in 2009. But I have never seen anything like this. If this is to be their final album and tour, they are finishing in the style that befits true champions, true heroes, true pioneers. There genuinely aren’t enough words to describe the magnitude and magnificence of this two hours. But there are feelings, feelings of sheer, utter and complete joy.

Brian Wilson – Friday 3rd June: Heineken Stage
But more impressive than that is Brian Wilson and his Band, who include founding Beach Boys legend Al Jardine and his son Matt, who beautifully and respectfully delivers the falsetto parts. Now, anyone who has seen the excellent Love and Mercy biopic knows that Brian Wilson has had his share of bad times. And he still isn’t altogether better. But my word, he is on form tonight. And what we witness is something of intense beauty, power and magic. Wilson is here in full, pointing to his heart, lifting his hands to the sky and giving us the most beautiful gift – the peerless, transcendent, flawless Pet Sounds album in its entirety, from the first moment to the last in exact order. The arrangements are so perfectly done that each note and timbre of the record is lovingly and deferentially captured. And between Wilson and Matt Jardine, they deliver these words of love, heartbreak, loss and yearning with an extraordinary passion and timeless beauty. To select individual moments from a record so immaculately held together would be unfair, but all I will say is that I had to crouch down to wipe tears from my eyes during ‘God Only Knows’. Truly, it was that overwhelming.

We look and see we’ve still got 40 minutes to go. So what do we get? A selection of some of the greatest pop songs Planet Earth has ever known. ‘Good Vibrations’, ‘Help Me Rhonda’, ‘I Get Around’, ‘Surfin’ USA’, ‘Surfer Girl’, ‘Don’t Worry Baby’. And completely unexpectedly – ‘The Monster Mash’. It’s a beautiful celebration of music as the sun shines over us – we’re so happy to be with Brian today, to share his gifts and his music. And he is loving it – smiling and even joking (“SHUSH YOU” he yells with a smile on his face during the rapturous applause for ‘Good Vibrations’ “WE NEED TO PLAY YOU SOME MORE SONGS!”). By the end of the set, as we jump around in joy to ‘Fun, Fun, Fun’ our hearts are full of sheer joy and love for this unique, beautiful man and his heaven-sent talents. Thank you Mr Brian Wilson. Thank you so, so much for that.