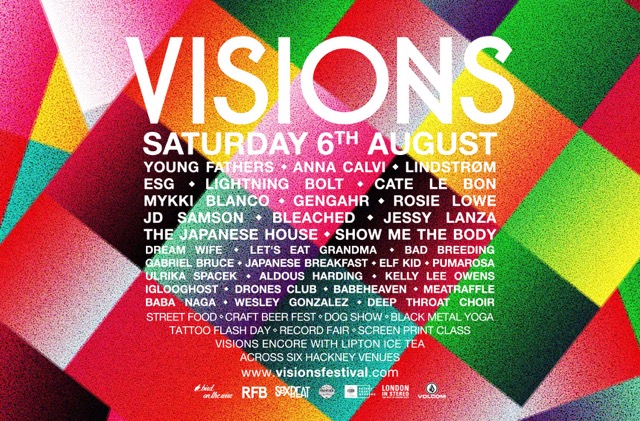 The music line-up has just been rounded off with some significant additions.  Welsh singer-songwriter Cate Le Bon will be providing tunes from her latest album Crab Day, while London based singer Rosie Lowe will also be appearing.  Former Let’s Wrestle frontman Wesley Gonzalez, Meatraffle and Gabriel Bruce are also on the bill.  Completing the line-up is Hackney’s all-female Deep Throat Choir, who will be performing a set of covers.

Visions isn’t just about the music though, and they’ll also be hosting a craft beer and street food festival with some of London’s best traders providing tasty treats for punters.  The Space Studios outdoor courtyard will feature creative outlets, where visitors can learn how to brew their own beer, get their own custom tattoo or buy vinyl both new and old.

For something a bit out of the ordinary, this year also sees the festival hosting their first dog show, hosted by Jen Long and judged by The Big Moon and Marika Hackman.  Plus, anyone in need of limbering up in the morning will be able to attend a special yoga class at Moth Club, with a soundtrack made entirely of black metal.

Tickets are still available from the Visions Festival website.