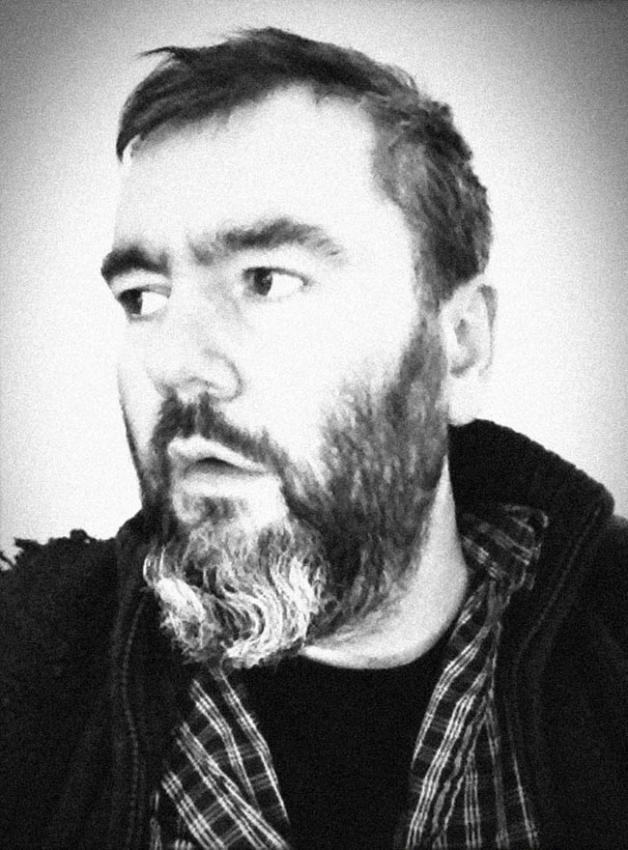 I’ve got to be honest, I was a little bit nervous about interviewing Aidan Moffat. Not that I don’t like his music; on the contrary, I’ve been a fan for the best part of twenty years. I suppose the man responsible for some wonderfully bitter lines over the years might be a little, well, grumpy. But when I speak to him he’s in Brixton, promoting the film Where You’re Meant To Be, he is really very warm and chatty.

‘It’s the first time I’ve ever had to write a tagline for a film, and I think I summed it up quite well,‘ he says. That tagline, by the way is ‘a funny wee film about music and death.’ He recalls that it ‘was just a tour film to begin with. Paul Fegan who was making the film got Commonwealth funding. Meeting Sheila Stewart changed the course of that.’

Sheila Stewart, who died in December 2014, was the daughter of Belle Stewart, a proud member of Scotland’s travelling community and Moffat credits them both with ‘sparking my interest in looking at Scottish folk music.‘ The film looks at the different relationship that they had with these traditional songs and the issue of ‘if we should help these songs evolve or keep them preserved in amber.’ Cheerfully having different approaches to this idea – not a new issue in folk music – Aidan says that ‘I’m not sure we were friends but we did get on.’

One friendship that goes back many years is that of Malcolm Middleton, his partner in the Falkirk band Arab Strap. Having had a very productive ten years between 1996-2006, they called it a day, and have now reformed. Much to the excitement of the Scottish population. Though he modestly describes it as ‘just a birthday party celebration,’ he’s clearly very touched that the band’s gig at the legendary Glasgow Barrowlands (widely viewed as Scotland’s best venue, I can testify that it sweats rock’n’roll ) sold out in just forty minutes. ‘The dates mark twenty years since we first played.’ Even when the pair called time on the project they remained in touch. Interviewing Middleton in 2007, he told me ‘Aidan’s still a mate.’ They appeared on each other’s records and toured together as solo artists. ‘We were much better friends after we split the band,’ Moffat reflects. ‘It’s done wonders for our friendship.’

He’s politely guarded when I ask him about future plans for Arab Strap. At the moment, there’s three gigs lined up in October in the UK, and there’s a new remix of their debut single ‘The First Big Weekend’ out now, remixed by Chemikal Underground labelmate Miaoux Miaoux, and entitled ‘The First Weekend of 2016’ for now it is just the three gigs, though he hints there may be more.

Moffat’s been very prolific as an artist over the years and has collaborated with a number of other acts. Under the name The Sick Anchors, he collaborated with Mogwai’s Stuart Braithwaite, producing a version of Atomic Kitten‘s ‘Whole Again’ that transformed the song from disposable pop to a version that could bring a tear to glass eye. He’s made two albums with experimental Scottish jazz artist Bill Wells – and his next project is an album with RM Hubbert. He’d known ‘Hubby’ for a number of years, and first collaborated with him and Franz Ferdinand’s Alex Kapranos on ‘Car Song’ on the 2012 Hubbert album Thirteen Lost And Found.

Politely telling me that it won’t be until ‘sometime in the future if there’s more music from Arab Strap’, the thought occurs that Moffat is truly one of the most prolific and diverse artists working in Scotland today. And while he may have once opened an album with the immortal line ‘It was the biggest cock you’d ever seen/but you’d no idea where that cock had been,’ in his hands and delivery, these observations of life remain never less than compelling.