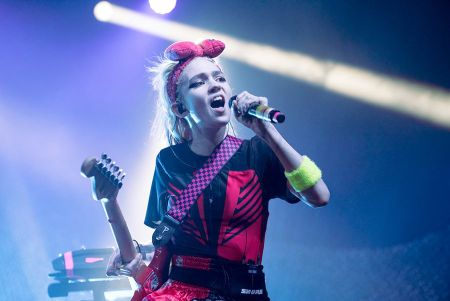 Grimes‘ return to Bristol has been a long time coming. Fans now on the cusp of leaving school might have seen her last show in the city while chaperoned by a parent. In 2013, forced by illness to cancel a European tour, Claire Boucher seemed overwhelmed by the huge success of Visions. Ensuring the following album, last year’s excellent Art Angels, exceeded expectations took the best part of four years. And then this gig, originally scheduled for the university’s Anson Rooms, was delayed by three months. For once, the term hotly anticipated makes sense.

Yet on the night, the high temperature is a nervous energy. People enter the venue through airport metal detectors and over-caffeinated traffic wardens bark at them if they dawdle for a moment on the stairs. The opening act, and indeed the piped filler between the two advertised sets, is everyone’s drunk uncle’s self-inflicted garden fork accident, the Labour party.

Glittered younger fans grasp upwards for shining heroes and who can blame them? How does one join them? Early in the evening they dance in isolated pockets, but by its end they force themselves together by sheer mutual will. Support act Hana is vivid and assured, but retains just enough of the bedroom dancer to bridge the gaps. A few back-lit parasols are all it takes to make a world that’s alien but within reach.

After she leaves the stage, angry, fearful rants immediately return to fill the space. However, as Grimes springs into ‘REALiTi’, the tension evaporates in a candy-scented haze. The O2 is known locally for its poor sound and, as ever, the bass is thunderous. Watching upstairs through a metal grille is like watching phone footage on YouTube. It’s a shame that’s all some punters get, because at the front, kids dressed as fairies are having the time of their lives.

Grimes has the enviable ability to transform her weaknesses into towering strengths. She babbles nervously, apologises frequently and sings as though possessed by a demonic toddler, yet these qualities combine into a performance of thrilling charisma. She’s suffering from flu, but feeding off a crowd desperate for fun, she gives a breathtaking show. It’s the temporary relief many people seem to be craving.

Anger occasionally flares at the colder periphery of the crowd. During ‘Kill v. Maim’, a guard furiously shoves people aside, charging towards the stairs, and those nearby noticeably tense up. Has he seen a fight? No, he’s seen a man vaping.

At other times, the mood is self-congratulatory. Near the end, Boucher says something of which only the words “country” and “fuck” are audible through cheers. And well done to the drunk guy who “voted Green in the referendum,” we’re all very grateful you didn’t “vote for apathy.” Douglas Coupland wrote that history can’t champion or feel sorry for the middle class and “any small moments of intense flaring beauty […] will be utterly forgotten.” That’s entirely proper, but it’s hard the begrudge these guys the chance to exclaim “how good was that?” Even this week.