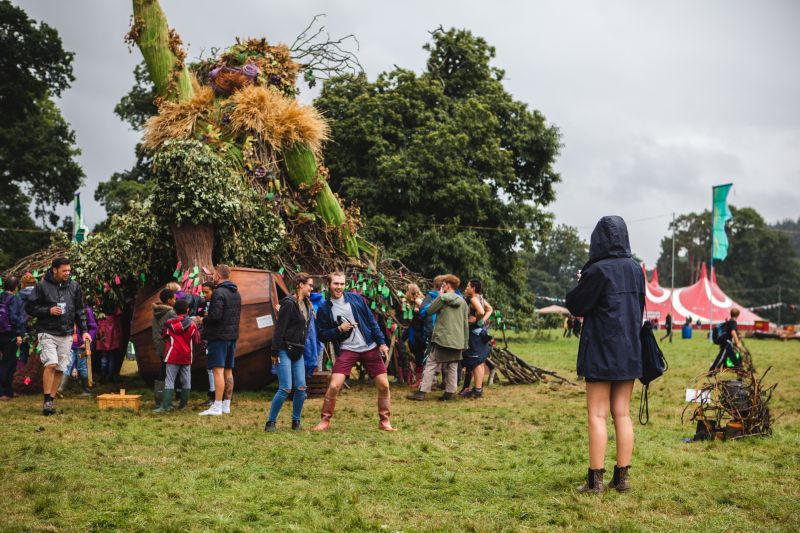 There was a moment during this year’s Green Man Festival when the crowd started singing ‘Happy Birthday’ to Whitney‘s sound engineer.  An instance of togetherness that summed up the atmosphere of the festival.  It was this community spirit that helped to make this four-day event in the Brecon Beacons one of the highlights on the UK summer festival circuit.

While it was tempting to spend an entire weekend watching movies and comedy, Green Man was still all about the music.  Things kicked off on Thursday night with King Gizzard and the Lizard Wizard‘s brand of break-neck,  heart-stoppingly abrasive psych rock. The Australians injected a dose of punk-rock angst into the genre, even when frontman Stu Mackenzie whipped out his flute like he was playing in Jethro Tull.  Despite some nifty lighting, headliners Wild Beasts were less entrancing.  New songs from their latest, synth-laden album Boy King, however, did pack some extra punch live.

Green Man Rising competition winner Tony Njoku opened up Friday with sparse, intricate yet emotionally deep songs from his album In Greyscale.  Far from being bland, Njoku provided a thoughtful, contemplative start to the day.  It was more of a black and white affair with Danes Palace Winter, whose brand of indie is often expansive but just doesn’t always hit the high notes.  While they do have a few decent indie-pop tunes, their set felt a bit flat, reflected in the slightly lukewarm response from the audience.

Meilyr Jones couldn’t possibly be flat even if he tried.  He commanded the stage with a star-like presence that never overshadowed the blisteringly mischievous fun of his chamber pop.  His stage banter was fresh and his gentle lilt betrayed sharp observations.  “We played a festival in Cornwall recently.  There were a lot of Olivias there,” he noted, before introducing his song ‘Olivia.’   Everyone started laughing. We all knew exactly what he meant.  But at times it seemed that even his most excellent backing band were never quite sure what Meilyr might be up to next.  Frequently slipping into Welsh, he claimed to be talking about his keyboard player Richard Jones, who appeared to be pretty amused by it all.  It was a set that demanded to be watched. 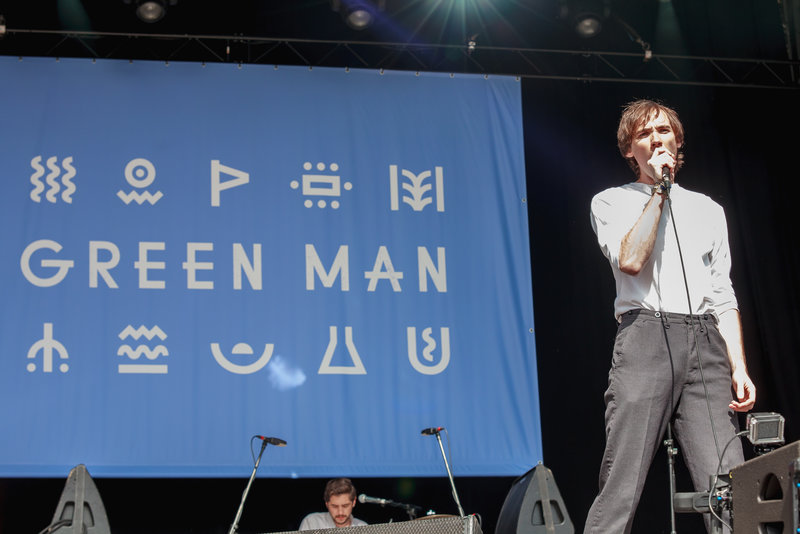 Julianna Barwick‘s simple looped vocals, cello and piano created an ambient, meditative vibe that washed over the crowd.  Perhaps Barwick even managed to chill the equipment out because technical difficulties meant Kamasi Washington was 20 minutes late. But it was worth the wait.  Washington and his crew blasted through a number of funked up numbers from his aptly titled LP The Epic.  It was also a family affair.  Washington talked about his band like brothers and sisters, and his equally talented father even joined the group on stage for a few songs.  The most touching part came before the smooth ‘Henrietta Our Hero,‘ which Washington had written for his grandmother.  “It’s not what you have, it’s what you do” he said, echoing her words and gaining rapturous applause in the process.

Former Let’s Wrestle member Wesley Gonzalez livened up the Walled Garden with a few of his off-kilter, witty pop tunes (and enough banter to match).  Watching Gonzalez was like watching a punk rock Elvis.  His swagger and intense stage presence were something special.  And he had the tunes to match.  The Scott Walker-inspired ‘In Amsterdam’ was filled to the brim with earnestness, showing off why he’s becoming “one to watch.”   In contrast, there was no banter to be found at Floating Points’ set but with good reason.  Their simple looping, kaleidoscopic light display moved in time to the music and was hypnotic. 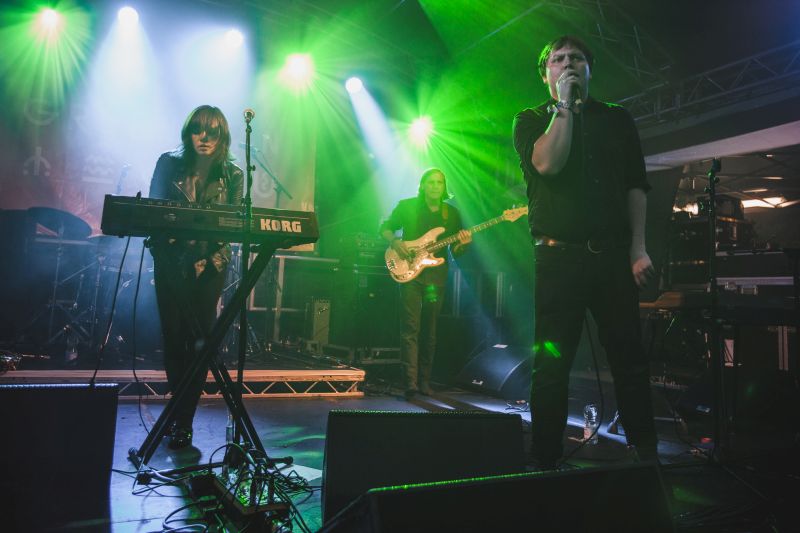 One stormy night later came a trio of rising bands to kick off Saturday.  Belfast trio Sea Pinks’ jangly indie pop isn’t anything unique but the sunniness of tracks like ‘Ordinary Daze’ did brighten up the wet afternoon.  FEWS drew a pretty massive crowd, something that didn’t go unnoticed by the band.  Guitarist and singer Frederick Rundqvist seemed overwhelmed by the reception the band received.  He shouldn’t have been surprised.  Their angsty post-punk, sometimes with a motorik or psych tinge, was ferocious but not without catchy hooks.  London duo Formation were powered by heavy percussion, 80’s synths and cowbells.  They came across a bit like an angrier version of The Rapture, especially on dark new single ‘Drugs.’ 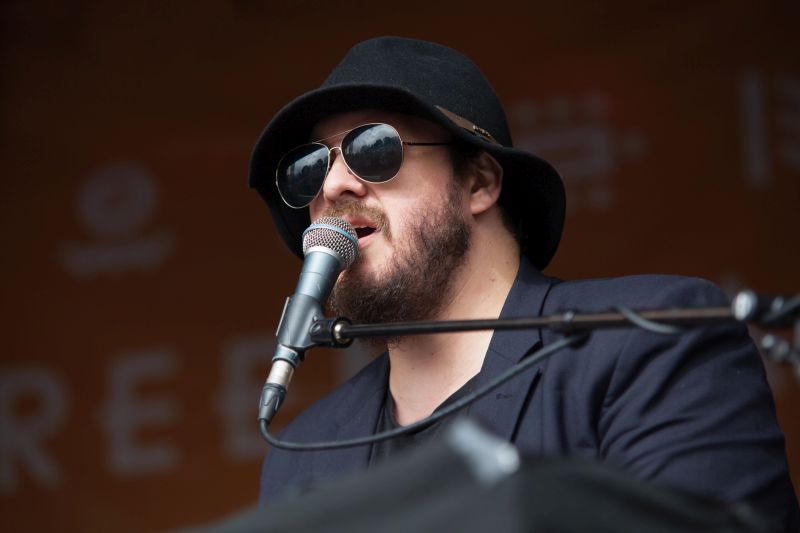 Visa problems and deportation prevented BC Camplight from playing Green Man in 2015, but mastermind Brian Christinzio, who now lives in Manchester, finally made it to the festival.  He and his crew of Mancunians made up for being a year late to their set by powering through distinctly rougher, heavier versions of songs from their genre-bending album How to Die in the North.  ‘Just Because I Love You‘ and ‘Love Isn’t Anybody’s Fault’ morphed from being twinkling, retro pop gems into energetic rock numbers.  Christinzio’s wry and sometimes surreal take on love, murder and life was still at the forefront of the songs.  “Don’t let your kids hear this one,” he advised before the particularly twisted ‘Good Morning Headache.’

More child-friendly was the twee-pop of Liverpudlian singer and flautist Laura J Martin.  It’s too bad Martin had a couple of technical difficulties, meaning her delicate voice was all but drowned out by the music.  But you can’t drown out the comedy stylings of Yorkshire singer John Shuttleworth.  As usual, he was armed with his Casio (now with a MIDI!) and board of crazy sound effects (some that get “a bit New Order”).  He slipped in a couple of new numbers alongside old classics.  As the mass sing-along proved, ‘Y Reg’ will never get old.  By the end, lighters were in the air for the beautiful ode to shepherd’s pie, ‘Can’t Go Back to Savoury Now.’

As founding member of German legends Neu!, Michael Rother knows a thing or two about krautrock, having spent 40 years perfecting his art.  Rother was a man of few words, only pausing to thank the crowd, but it only took a couple of tracks from his back catalogue to whip them up.  Some of Rother’s influence is arguably present in the work of psych-pop outfit Jagwar Ma.  Their new album, Every Now & Then, comes out in October, so their set was an opportunity to test-drive new material.  It seemed as if the group haven’t changed their sound too much, wrapping house beats and synths around pounding drums and catchy choruses. Although these songs were an unknown entity, they packed a serious punch and kept the crowd in a euphoric state. 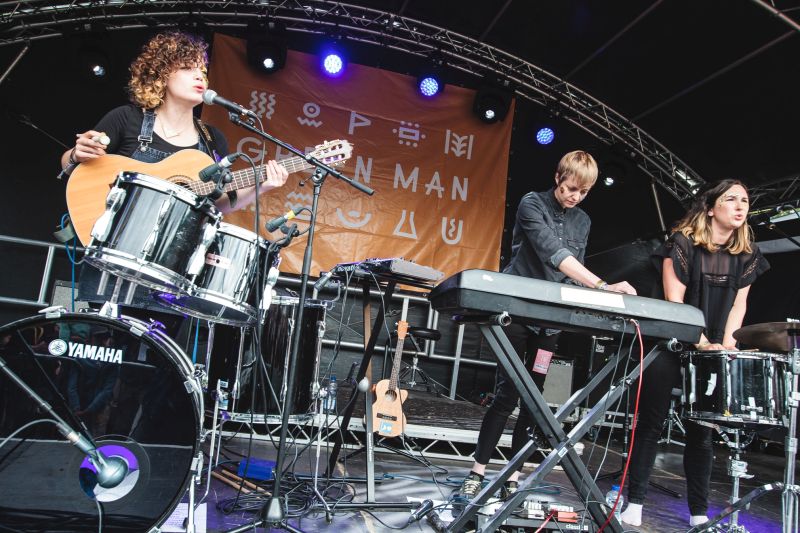 Former Green Man Rising winners, Nottingham trio Haiku Salut were the perfect start to Sunday.  The band’s intricate combination of looping electronica and space age bleeps coupled with accordion and some thumping percussion never dissipated in the open air.  Happy Meal Ltd. certainly knew how to make an impression.  Dressed in bright orange furs, 1930’s slacks and one striking red and black suit, they won the prize for “Most Uniquely Dressed Band.”  Like a hybrid of Roxy Music and New York Dolls, they smashed together krautrock, post punk and new wave elements with glitchy house beats.  Even their frontman fell somewhere between Human League‘s Phil Oakey and Mark E Smith.  It kind of worked in places and was intriguing, but the abrupt tonal shifts seemed to leave some a little mystified.  There’s no puzzle surrounding why Whitney’s sparkling 70’s sound has gained a huge following.  ‘No Matter Where We Go’ and ‘No Woman’ received rapturous applause.  Drummer and singer Julien Ehrlich also showed he’s an affable character, making friends with a young boy wearing a Black Sabbath t-shirt named Toby and continually apologising for swearing.  No wonder people have fallen head over heels for them. 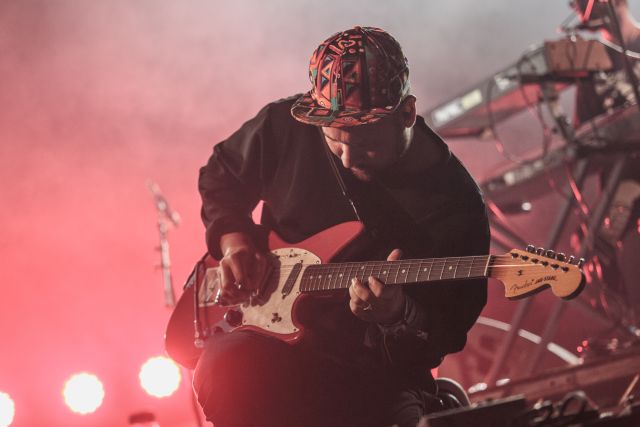 Unknown Mortal Orchestra already have a legion of fans in place, but the swelling crowd just didn’t seem to be in to most of their set.  That reaction was an enigma, since their performance was rammed with loose drums, catchy hooks and funk filled basslines that really should get people moving.  The party atmosphere UMO tried to ignite didn’t fully materialise until the closing double-whammy of ‘Multi-Love’ and ‘Can’t Keep Checking My Phone.’  By contrast, people were instantly grabbed by Hippies vs Ghosts, something of a Welsh supergroup who closed the Rising stage.  Although they’ve only got a handful of songs to their name (“we’re new to this you know“), their fast-paced psych-rock with tricky, almost math rock elements had the crowd in raptures.

Afterwards there was still time to take in a headliner.  Despite being the more downbeat of the options, the rare opportunity to see Grandaddy live was one not to pass up.  Across an hour the Californians powered through their slightly grungy take on rock, cut through with intricate synth details and swirling bleeps.  It didn’t take them long to bring out crowd favourite ‘The Crystal Lake,’ which came with its own visuals of skateboarding teens. Indeed, much of their set was accompanied by videos that sometimes seemed random, while at other times told an intriguing tale.  During the airing of a brand new song, a short film played taking us around a Japanese IKEA.  It was a fascinating watch but one that slightly  distracted from the song itself.  Frontman Jason Lytle isn’t one for banter but he did have a little fun with the audience.  At one point he lead into a song and asked “are you ready?” only to jokingly start repeating his intro.

And then finally came the ceremonial burning of The Green Man, followed by an impressive fireworks display lighting up the night sky.  Over its 14 years of existence, Green Man has been the most consistently brilliant event, promoting family-friendly activities, bringing in new art forms, creating a caring friendly vibe and, most importantly, offering outstanding music line-ups that go way beyond its folkish beginnings.  Unlike many of its contemporaries, it has remained a fully independent event, with no corporate connections and strong local links.  In truth, it’s easily the best festival in the entire country and we’re already counting the days to its 15th anniversary year in 2017.

This year’s Green Man Festival was held in the Brecon Beacons, Wales, between 18th-21st August 2016.