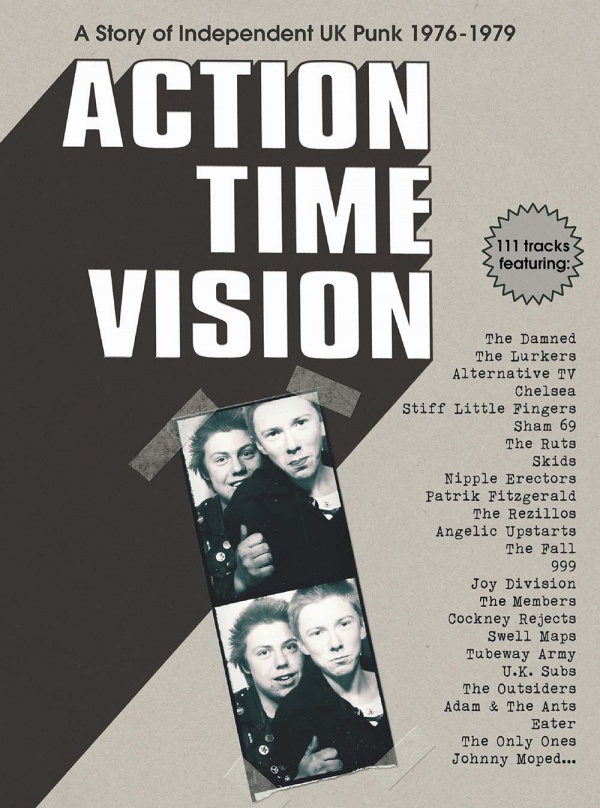 December 9th marks the release of Action Time Vision, a tremendous new punk compilation – a four disc set focusing, in its entirety, upon UK independent releases within the genre. With the help of Cherry Red themselves, God Is In The TV managed to track down a handful of key players – Nick Cash from 999, Dave Henderson from Disco Zombies, Kid Dee from The Adicts and punk afficionado Mark Perry, creator of seminal fanzine Sniffin’ Glue and frontman for Alternative TV.

What was the first punk record you heard?

The first punk record I heard was the first Ramones album, which I’d read about in the NME & bought on import from a shop in Soho, London in June 1976. It sounded like a breath of fresh air. At the time I was listening to a lot of US country rock type stuff – Neil Young, Little Feat etc – and The Ramones seemed to make all that sound redundant after just one listen. I went to see The Ramones at the Roundhouse in July 1976 and started to find out about other bands that were starting up, like The Damned. I wanted to do something myself but wasn’t a musician, so I thought of doing the fanzine as a way of getting involved and spreading the word, so to speak.

After the initial excitement of the punk scene had calmed down and the bands were being written about by the regular music press – NME, Sounds, Melody Maker – I lost a bit of interest in doing Sniffin’ Glue. I just didn’t think there was a need for it anymore.

I had doubts about where punk could go in the early part of 1977. New bands were coming through but a lot of them sounded the same and seemed to be following the same format as laid out by the likes of Sex Pistols, The Clash, The Damned, Buzzcocks etc. I was more interested in what the likes of Throbbing Gristle and Wire were doing. I wanted to get away from rock music. The Clash signing to CBS was the nail in coffin for me at the time. After that, every band just wanted to get a record deal as quickly as possible. In my opinion, creatively, a rush to the bottom.

So, in January 1977 I started a record label, Step Forward, with the help of Miles Copeland, and then Alternative TV as a way of getting my ideas across in a different way. I thought that punk had got a bit bland after the initial rush, so wanted ATV to be a bit more adventurous in its approach. I was listening to a lot of reggae and Can at this point and wanted to reflect that in my music.

I know I’m biased; I put the record out on Step Forward, but I’d go for Sham 69’s ‘I Don’t Wanna’. To me, Sham 69 summed up what was possible after punk kicked the doors of the music industry in. They weren’t some fashionistas from the King’s Road but ordinary blokes who had something to say. Punk was their outlet for years of pent up frustration, like it was for so many young bands up and down the country. Shame that, in the end, they also succumbed to the lure of the big record company deal.

Could punk – or its equivalent – ever happen again?

Short answer, no! Punk happened because people were fed up with the music scene at the time. That’s just not the case anymore, you can play or listen to anything you want these days. If you want to check a band or scene from any genre out now, a couple of clicks online and you’ve seen the gig, heard the record, bought the t-shirt…the lot. There’s no commitment or time put into anything anymore. Don’t get me wrong, there’s still some great music out there. In fact, it’s probably more interesting musically than it was in the 70s, what with the amount of bedroom recording etc. But, nothing will be as original and influential as Punk.

What are your strongest memories of the early days?

I remember ringing up the local Dj Andy Archer to play ‘Easy Way Out‘ on his daytime show, which he did do. Considering his radio show was very middle of the road, back then to play a punk record, especially one depicting suicide, was quite outrageous!

We didn’t see that side at all. In fact we used to practice at our local youth club with Rastas and did many early gigs with the local reggae group Jah Warriors.
All three of us (Pete, Monkey and myself) went to the ’77 Rock Against Racism gig in London featuring The Clash, X-ray Spex, Sham 69 and Steel Pulse. We have never put up with any shit from the far right and have never affiliated any political views.

Standout tracks for me would be The Killjoys and The Snivelling Shits ’cause I knew then that punk wasn’t all about pompous art student kids in Kings Road. I liked DIY in punk rock and still do. It’s what punk was all about…

999 were one of the first wave of punk bands, we’ve been going since 1976. I put our longevity down to the fact that the band has a worldwide following who appreciate our music, style, attitude and hard hitting live performances, and also the amazing connection that happens between the band and audiences. 999 have always said the audience is as important as the band. Punk has endured because it relates to people on a real level and crosses all age barriers and indeed breaks down barriers. We were one of the first bands to support and play gigs for the Rock Against Racism movement. The world would be a worse place if it wasn’t for Punk.

Did you encounter much rivalry?

At the beginning of Punk, the bands were friendly towards one another and stuck together, as they were being attacked by the establishment and sometimes by people who just hated Punks. As it became more competitive the bands started slagging one another off; however nowadays everyone’s best of mates again. I think if you talk to people they will say that 999 had their own individuality in the scene both in the music and the bright clothes we wore, for our first album cover, as a good example.

The standout track on this interesting compilation has to be ‘New Rose‘ by The Damned. It was historically the first punk single to be released. I always feel happy when I hear it and it has stood the test of time; also I’m a fan and was lucky enough to be asked to join them on stage to sing ‘The Last Time‘ at the Royal Court Theatre in Liverpool – great night.

‘Obsessed‘, Joey Ramone said he loved this track. I guess it appealed to their Ramones/Fistful of Dollars love of the spaghetti western style. I admit it pays homage to this genre and the great Ennio Morricone, and I don’t at all mind ripping him off… after all we are punks!

Leicester seems an odd place for a punk band to come from. What was the scene like?

Leicester had a poor but varied scene from Showaddywaddy to bands who played covers on the pub circuit. One of the latter engaged with a proliferation of new acts who often shared the same gear and drummer and had visions of a post-punk revolution. Wendy Tunes became the Swinging Laurels and flirted with ‘80s pop success. Members of Farm Life and The Sincere Americans became The Bomb Party, while some of the Foamettes became Il Y A Volkswagens (signed to Rough Trade) then The Appolinaires (Two Tone). In 1978 we’d done a tour of Leicester (five venues, five gigs) and decided it was time to move to London. We decided to record a single which Andy Ross (later of Food) paid for, I screen printed 1500 sleeves and inhaled a lot of toxins as a result. Still, John Peel played it.

That song (‘Drums Over London‘) was quite controversial, right?

Andy Ross wrote the lyrics, it was tongue in cheek, an attack on an upper class society who were outspoken and anti-immigration (that sounds familiar). We’d marched from Trafalgar Square to Hackney on the Rock Against Racism protest, having come down from Leicester on the bus. By the time we recorded it, things were getting worse and RAR didn’t detect our irony, nudging Peel to stop playing it. A lot of our songs were humorous attacks on things like bland TV, the cold war, capitalism, the man (dare we say). Andy was too clever for his own good. “The natives are restless, they’re brandishing their Spear And Jacksons,” is about irate middle England raising a strimmer in protest (yep, nothing changes).

The whole set is made up of Peel essentials, things you’d only hear there, then have to troop off to Rough Trade to get a copy of. The early days of seeing The Rezillos, Sham, Chelsea, The Fall, The Only Ones (what a song ‘Lovers Of Today‘ is, still perfect), The Boys and The Members live in pokey London clubs soon made way to magical 45s that were perfect alternative pop – the more different the better as far as I was concerned. Who couldn’t love Rudi, Spizz, The Ruts, The Wall (another magnificent 45), Fatal Microbes and The Prefects? I allegedly produced The Adicts‘ single as the debut release for my Dining Out label (just sat there nodding actually). They were great times with lots of energy.