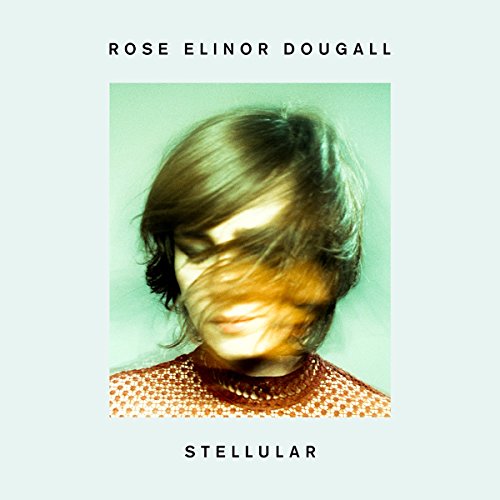 Rose Elinor Dougall is best known for being one-third of the irresistible ’60s pop-inspired girl group, The Pipettes. After leaving the original line-up in 2008, she went solo and released the gorgeously melancholic album, Without Why, in 2010. In the seven years that have passed, Dougall kept herself busy collaborating with Mark Ronson, performing in various backing bands, and releasing two EPs. Now she’s back with her second record, which improves on her underrated debut.

The most immediate thing about Stellular is the directness of the songs. Dougall appears to be asserting herself even more than she did on Without Why. The title track was released as a single last year and is a perfect introduction to Dougall’s apparent growth in confidence. It speeds along with a throbbing new-wave bassline and eerie 60s B-movie effects that can be heard on The Horrors best work. Hiccupping backing vocals and handclaps appear on one of many great choruses. ‘Hell and Back’ shows what a great ear Dougall has for payoff with a chorus that bursts into life after a sombre verse.

Stellular is predominantly a darker record than Without Why. The songs are often filled with electronic tinges that give slightly unnerving atmospherics – as if you’re in some kind of slightly uneasy dream. The keyboards are more prominent this time around. The opener, ‘Colour Of Water’, is full of gothic-like dynamics and moody music as a background to her vocals.

There are moments of light on Stellular that come across as the more relaxing dreams that you don’t want to wake up from. ‘All At Once’ sounds like a lost early 80s synth-pop song. There’s a playful hint of funk to the rhythm on the addictive, ‘Closer.’ The middle eight provides a lyrical highlight as she sings, “I don’t care about your band/It’s 3.45am but I’ll be your biggest fan tonight.”

The intimate, ‘Space To Be’, provides the album’s highlight. Over a beautifully understated piano-led melody, she sounds her most lovelorn as she sings, “I want a love to lift me up high to wreak havoc on this heart of mine,” as synths sparkle around her. There’s a clarity in her voice that makes the reflective lyrics even more emotional. Dougall’s voice has always been one of her best assets. She goes from pleading and passionate to cool and detached with ease.

Stellular makes a great companion piece to fellow ex-Pipette bandmate Gwenno’s 2014 album, Y Dydd Olaf. They share a similar melodramatic feel created by songs with hazy melodies. Both albums were influenced by Broadcast and Stereolab as well as some of the more obvious electronic-rock German groups of the 70s.

Modern indie music can often sound stale or uninspired. Dougall avoids these trappings as she’s refined her gothic dream pop sound whilst maintaining her pop sensibilities. Hopefully Stellular will make people take notice of what an excellent songwriter she has become. It’s obvious she’s trusted her instincts and taken her time to craft this fine record. It’s one of the first great records of 2017.