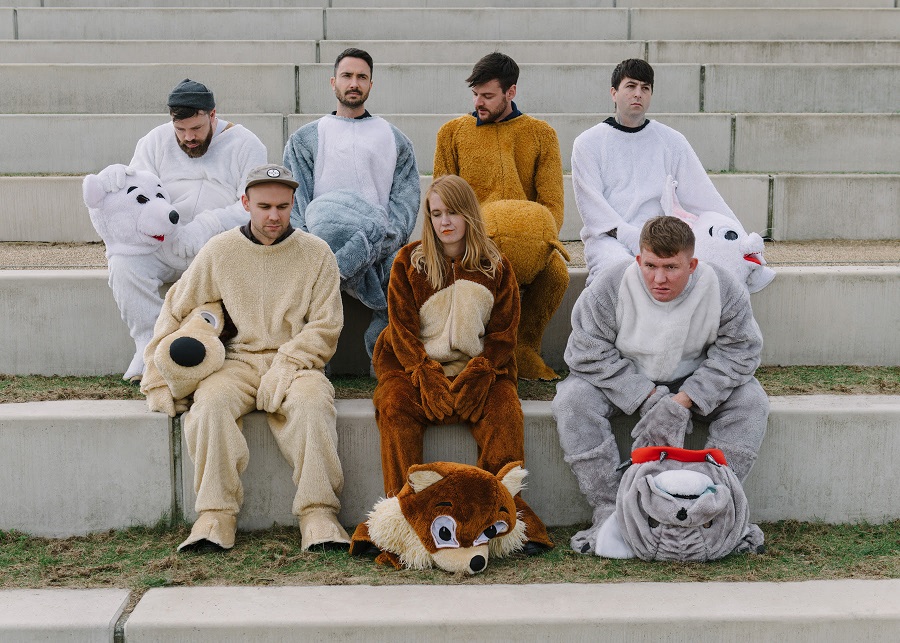 Over a decade since their first release, Los Campesinos! have yet to make a bad record.  They’ve steadily evolved as writers and arrangers, adapting to several lineup changes without breaking their stride.  While Sick Scenes comes after their longest break between albums, they’ve lost no ground.  Instead, they’ve made their saddest yet most rewarding album to date.

They’ve long written songs as if to laugh off the pain of a breakup over a few drinks.  Moments of quiet reflection such as ‘Heart Swells/Pacific Daylight Time’ and ‘To Tundra’ provided occasional relief between communal singalongs.  However, the balance has gradually shifted and their emotional range has grown.  Singer Gareth once breathlessly delivered one-liners, tenuously connected by half rhymes, in a yelping rap.  Such was his urgency, he didn’t leave room to breathe before the second half of a couplet.   Now, he often sings softly, carrying the melody and allowing his bandmates to leave more space, letting songs gently swell.

The arrangements are less hyperactive, reflecting a change in the singer’s perspective.  He’s no longer using put downs to get a reaction from an ex or a sympathetic cheer from friends.  The sadness is deeper and broader.  Partly, it’s the natural change that occurs throughout one’s twenties: he’s less likely to correct someone’s grammar or declare that an ex has “ruined [him] forever.”  He returns to a hometown his friends have abandoned for a sense of opportunity, only to regret “the rise of rent, the fall of home.”  But he doesn’t catastrophise.  Instead, his loneliness forces him to find inner strength.

He notes down moments of sorrow in a diary, so if the feelings become more frequent, he’ll know “it’s a false start and not an ending.”  Life can feel like ‘A Slow, Slow Death,’ he reflects, but still “I want it.”  He adapts to solitude, relying less on teammates’ chants and growing into his role as a lone front-man.

There are faster, louder moments, of course.  Fans will already know the single ‘I Broke Up In Amarante’, with its homage to Trust Fund in the chorus.  ‘Renato Dall Ara (2008)’ begins with a party heard through a wall.  The narrator gatecrashes, finding the host in a self-deceptive bubble, reading Marx by his parents’ pool.  However, he is no more sickened by this scene than by his own nostalgia for guest list privileges.  In short, Los Campesinos! still sound like themselves, but more patient and measured.  They are as angry as ever, but less petulant.

The arrangements are crisp and spacious, with prominent use of natural piano tones and acoustic guitars.  The subtle steel drums of closing track ‘Hung Empty’ recall the brightness of 2013’s No Blues.  However, overall, Sick Scenes has a more intimate sound.  The cavernous reverb and rising synth arpeggios of the last album are absent.  It’s a continued refinement rather than a transformation of their aesthetic.  For a band working at such a consistently high standard, nothing more was required to make a wonderful record.