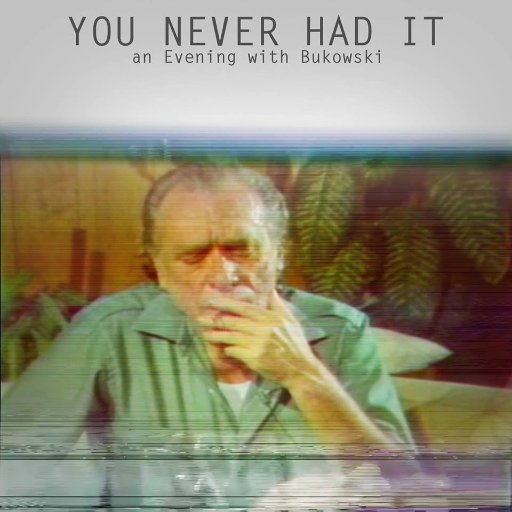 Showing at the joyfully, and appropriately, down at heel Joytown Grand Electric Theatre, You Never Had It: An Evening With Bukowski is, ironically, a sobering experience for anyone attempting to write. Attempting to write about anything, ever. Ironic because, true to the job description, Bukowski drinks and smokes his way throughout the entire effort with admirable gusto. Sobering because, despite being smashed and looking several decades post-mortem, he comes out with elegant prose with wit and style that, frankly, puts most everyone to shame.

Simple format: stick a journalist – Silvia Bizio – in a house with an author, get colossal quantities of red wine and fags in, press go. Where everyone else would be a gibbering wreck within half an hour, Bukowski, owing to much practice, one assumes, is pithy, erudite and surprisingly funny. Whether slagging off fellow scribes – “Everyone likes Hemingway…when they’re young” – or musing on his sex life – “Got to get it out the way before putting the tv on” – it’s impossible not to be seduced. Which is pretty impressive given the fact that the view is obscured by billowing clouds of cigarette smoke. And the fact this old time snooker hall has the unmistakable honk of decades of piss lurking in the recesses.

Maybe as a nod to the preferred tipple of the interviewee, the bar is drunk dry of red wine within half an hour. Seems the best way to pay homage to someone who, despite a somewhat chaotic life managed to turn out some classically great American writing. Down and dirty for sure but, you can’t doubt the talent.

Maybe he says it best when observing that, if you’re beaten relentlessly as a child, it knocks all the pretence out. Anything you put down on paper after that becomes more real. Hardly a recommended approach but you can see his point.

And that’s it: just shy of an hour in the company of someone who has as decent a claim to greatness as anyone else. It does seem like the blasted 8 am conversation after a long night but, unlike the reality for the rest of the world, his to and fro with the interviewer does actually make sense. Whether talking critically about his way of work and output or simply discussing life and whatnot, there’s a genuine intimacy about the whole film. And it’s hard to see any truthful portrait being done in any other way.

Highly recommended. If nothing else, to make you feel utterly inadequate.